Galls on blueberry twigs are a common sight in eastern North America.  They are caused by Hemadas nubilipennis, a tiny wasp in the family Pteromalidae.  Most members of this family, like the ones that emerged from my goldenrod rosette galls, are parasitoids of other insects, and this is one of the very few gall formers. 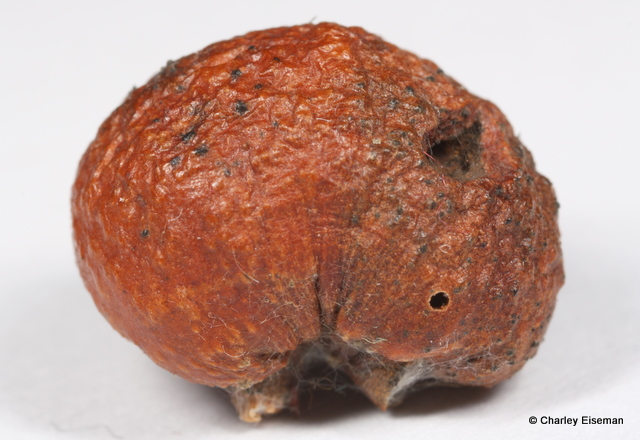 Back in December I collected three of these galls from lowbush blueberries in the woods near my house.  On April 15 I discovered that two wasps had emerged, and I found a single exit hole (about half a millimeter in diameter) in two of the galls.  Given that two of the same kind of wasp had emerged from two different galls, it would seem reasonable to assume that these wasps were Hemadas nubilipennis, yes?

Well, no such luck.  They were members of another family of parasitoids, the Eurytomidae (thanks to Ross Hill for the identification).  I checked the Universal Chalcidoidea Database (pteromalids, eurytomids, and a number of others belong to the superfamily Chalcidoidea) and learned that two eurytomids are known to parasitize Hemadas nubilipennis: Eurytoma solenozopheriae and Sycophila vacciniicola.  I looked these up in the 1979 Catalog of Hymenoptera, and as far as is known, both species parasitize this host exclusively.  The same goes for Ormyrus vacciniicola (Ormyridae).  Eupelmus vesicularis (Eupelmidae) has also been reared from these galls, and by contrast is one of the least host-specific chalcidoids–its known hosts include six different orders of insects.  It is thought to have been introduced from Europe in straw, and the list of host species in North America is said to be “tiresomely long.”

So of my gall emergences so far this year, one in four has been the actual gall inducer, and the rest have been parasitoid wasps.  I think this is pretty representative of what’s going on out there–there seem to be more parasitoids than anything else.  Hemadas nubilipennis galls are multi-celled, so it will be interesting to see what else comes out of the ones I collected.

I am a freelance naturalist, endlessly fascinated by the interconnections of all the living and nonliving things around me. I am the lead author of Tracks & Sign of Insects and Other Invertebrates (Stackpole Books, 2010), and continue to collect photographs and information on this subject. These days I am especially drawn to galls, leaf mines, and other plant-insect interactions.
View all posts by Charley Eiseman →
This entry was posted in Uncategorized and tagged blueberry, chalcid, Eurytomidae, gall, Hemadas nubilipennis, parasitoid, Pteromalidae, Vaccinium, wasp. Bookmark the permalink.