This morning I was taking pictures of a jumping spider in my yard, and when I paused to review the shots on my camera’s LCD (a necessary ritual when using my macro setup, since many of the pictures are over- or underexposed and I need to mess with the flash exposure compensation to get it right), I noticed what seemed to be the furcula of a springtail poking down from between its jaws.  The furcula is the forked “tail” that is normally curled under a springtail’s body, which it uses when it wants to spring into the air–hence the name.

Jumping spider munching on a springtail.

The spider had just jumped a short distance before I took this photo, and just before that it had been sitting still for a few moments, evidently focusing intently on something invisible to me.  I went to the previous frame, panned over to follow the spider’s gaze, and sure enough there was a little doomed globular springtail sitting there.  It was less than half a millimeter long, and not too far off from the color of the stone it was sitting on, so it was no wonder that I had missed it. 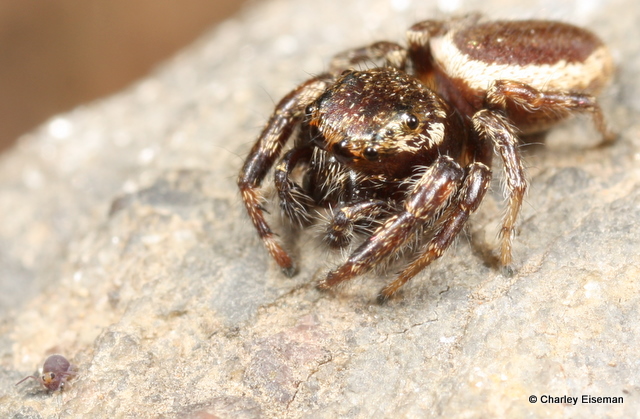 The spider prepares to pounce on an unsuspecting springtail.

Going back one more frame, I saw that the reason the spider had hesitated a few moments before pouncing was that it had been trying to decide which of the springtails to grab.

The spider surveying the buffet line.

Turns out the world is simply crawling with springtails that are too small to think about.  These particular ones are garden springtails (Bourletiella hortensis), one of the few kinds with a common name (snow fleas being another example).  I had only seen one of these before, last year when I was sitting on my porch and noticed an almost imperceptible speck on my hand.  Since in that case I saw the springtail before I took the picture, I had the opportunity to extend my macro lens all the way and properly capture one of the cutest little bugs I’d ever seen.  In the second shot below, you can see the furcula curled under its body. 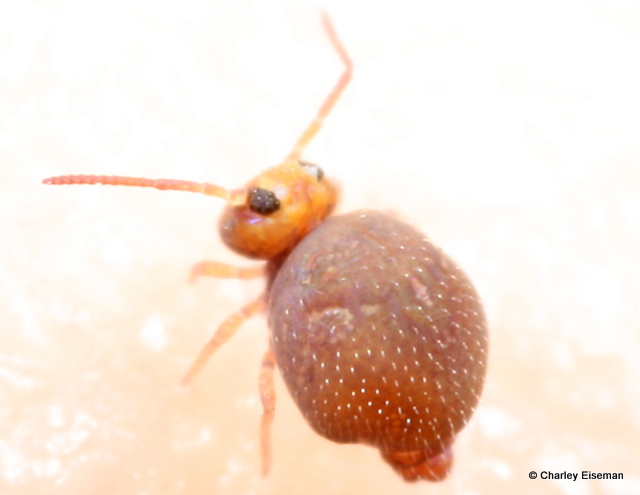 Another view of the same garden springtail.

I am a freelance naturalist, endlessly fascinated by the interconnections of all the living and nonliving things around me. I am the lead author of Tracks & Sign of Insects and Other Invertebrates (Stackpole Books, 2010), and continue to collect photographs and information on this subject. These days I am especially drawn to galls, leaf mines, and other plant-insect interactions.
View all posts by Charley Eiseman →
This entry was posted in Uncategorized and tagged Bourletiella hortensis, Collembola, garden springtail, globular springtail, jumping spider, predation, Salticidae, spider, springtail. Bookmark the permalink.