About the same time that I first saw the feather-legged orbweaver’s web in the stone wall by my back door, I noticed some little burrows in the sandy soil between the stones.  Some of them were simple, roundish, 2 mm diameter holes, but the ones that first caught my eye had 6 mm wide turrets around the entrances. 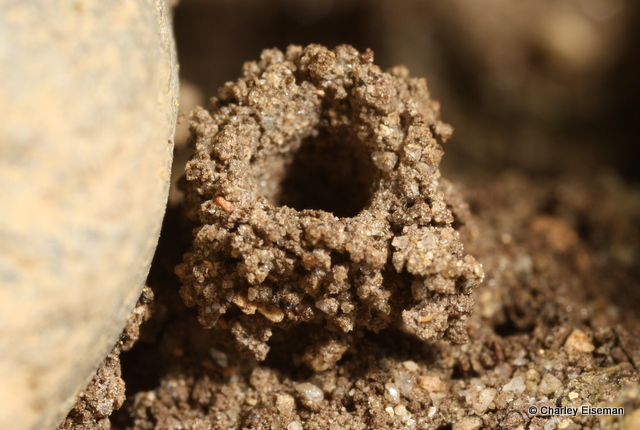 The most pronounced of the turrets, about 5 mm high.

In my mind I reviewed the various things that make turreted burrows, and some kind of bee seemed to be just about the only option.  I didn’t see any bees around, nor did I when I checked periodically over the next several days.  In the meantime, I came across some tiny sweat bees (Halictidae) burrowing in an ant mound while conducting a vernal pool survey a few miles away.  The mound was one of many in that swampy little patch of woods.  It was evident that the ants needed to build these mounds in order to keep their nests above the water table, and on the one hand it made sense that this high and dry bare soil was the only suitable place for the bees to dig their burrows in that area, but on the other hand it was surprising to see them digging into an ant nest without any apparent conflict. 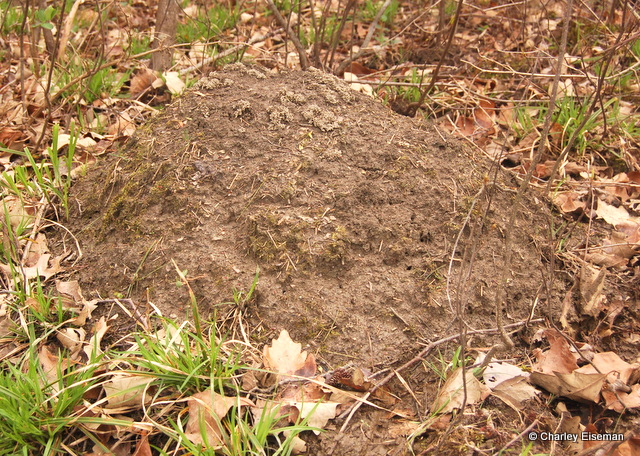 On BugGuide.Net, James C. Trager identified the ants as probably Formica glacialis, a species for which this sort of wetland habitat is typical.  Although the bees wouldn’t hold still long enough for me to get a decent photo, John S. Ascher was able to recognize them as Lasioglossum, subgenus Dialictus.

A probable Formica glacialis, dragging a dead spider across the mound to its nest entrance.

These bees became my prime suspects for the burrows by my back door, and four days later the stone wall was suddenly alive with the tiny bees, coming and going from the existing burrows and excavating new ones.  I managed some better shots of these, and Dr. Ascher confirmed that they, too, were Lasioglossum (Dialictus).  According to BugGuide, there are about 250 North American species in this subgenus, and many of them are hard to tell apart even under a microscope.  The fact that they look very similar doesn’t mean they’re ecologically identical, however.  In early April I photographed one that was buzzing around some seasoned elm logs, and Dr. Ascher identified it as Lasioglossum (Dialictus) coeruleum, noting that this species nests in soft or rotting wood instead of in soil. 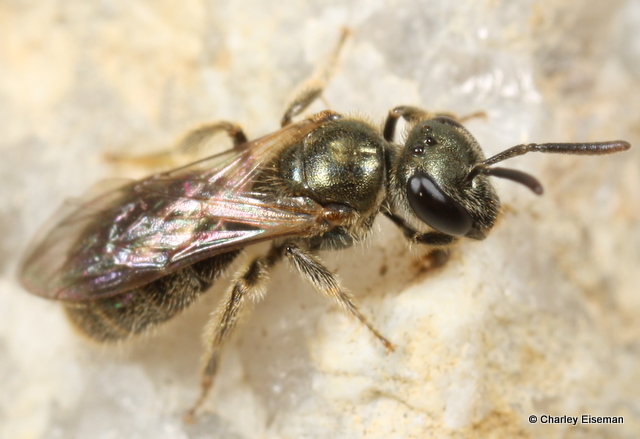 A sweat bee peeks out of her burrow.

I am a freelance naturalist, endlessly fascinated by the interconnections of all the living and nonliving things around me. I am the lead author of Tracks & Sign of Insects and Other Invertebrates (Stackpole Books, 2010), and continue to collect photographs and information on this subject. These days I am especially drawn to galls, leaf mines, and other plant-insect interactions.
View all posts by Charley Eiseman →
This entry was posted in Uncategorized and tagged ant, bee, burrow, Formica glacialis, Halictidae, Lasioglossum, sweat bee. Bookmark the permalink.