For whatever reason, one of things I’ve most wanted to find since writing my book is the mud-covered eggs of certain ground beetles described on page 285.  The only photo I have seen of these is in S. W. Frost’s Insect Life and Insect Natural History (1959), probably the closest thing there was to a guide to insect signs before I wrote mine.  I remember reading that these are found in floodplains and other swampy areas, but otherwise had no idea where or when to look.  So there I was, standing at the edge of a vernal pool in Kentucky on May 27, not feeling like following Noah in to look for salamanders, when I looked up and saw that many of the tupelo leaves around me had little gobs of mud on their undersides, at about eye level.  I was pretty sure I had found what I was after. 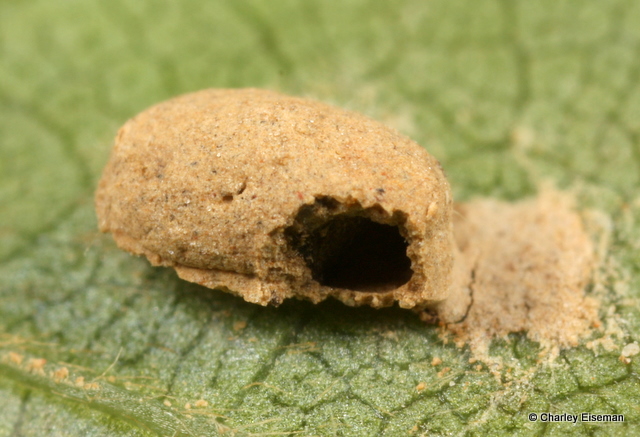 Mud egg cell of a vivid metallic ground beetle (Carabidae: Chlaenius), with a hole chewed by an ant or some other insect predator. (3 mm)

I called Noah over to have a look, and he opened one up to reveal the embryo inside.

I stuffed three leaves, bearing the opened cell along with two intact ones, into a vial and we continued on our way.  A mere two days later, in Nashville, I checked the vial and found a beetle larva in it.  I examined the egg cells and two were still intact, which means that in that short time, somehow the < 3 mm white blob in the above photo had developed into the 6 mm black larva shown in the photo below.  I uploaded the latter photo to BugGuide.net, and in classic form, Vassili Belov had identified it as a Chlaenius species within 32 minutes (even though it was after midnight).  This genus is given the common name of “vivid metallic ground beetles,” and examples of adults can be seen here. 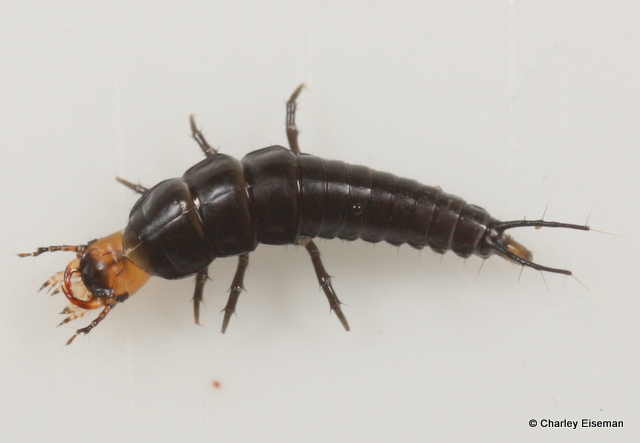 The next morning, a second larva had hatched, so I was able to see what a hatched (as opposed to predated, as shown in the first photo) egg cell looks like. 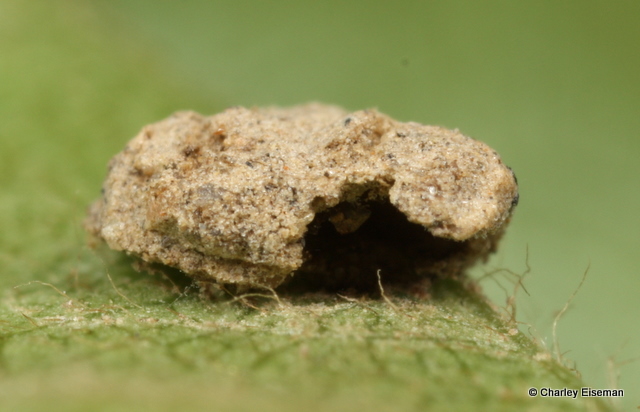 Egg cell from which a Chlaenius larva successfully emerged.

This was the last time I saw two beetle larvae in the vial.  When I got home to Massachusetts on June 3, there were chitinous crumbs suggesting the fate of one of the larvae, and one of the smooshed mosquitoes I had put in the vial was also gone, along with a little live midge I had put there (I knew the larvae were predaceous, and wasn’t sure if they would be willing to scavenge).  Also in the vial was a little wasp, which I had definitely not put in there. 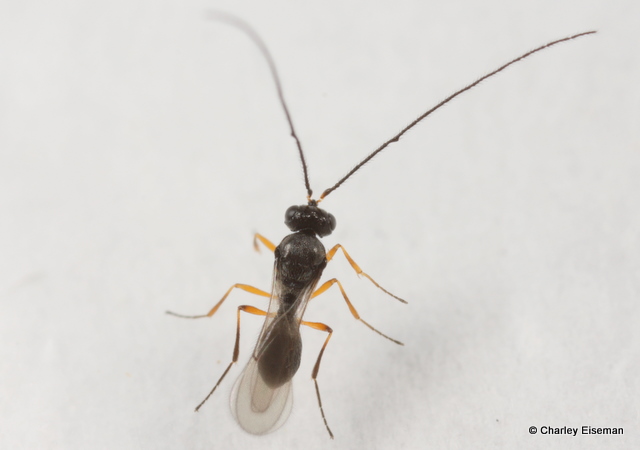 The wasp was a platygastrid whose mother had parasitized the third beetle egg.  Beyond that, I’m not exactly sure what it is: Victor Kolyada identified it as a member of the subfamily Scelioninae, but the only platygastrid parasitoid of Chlaenius in the 1979 Catalog of Hymenoptera is Trimorus caraborum, in the subfamily Teleasinae.  A note at the beginning of the Trimorus section states: “Practically nothing is known concerning the biology and host relations of the group, but the single apparently reliable rearing record suggests parasitization in eggs of Carabidae.”  Guess I’ll just have to wait until a platygastrid specialist can take a look at this wasp*.  Anyway, for completeness, here’s what it looks like when a platygastrid emerges from a Chlaenius egg cell: 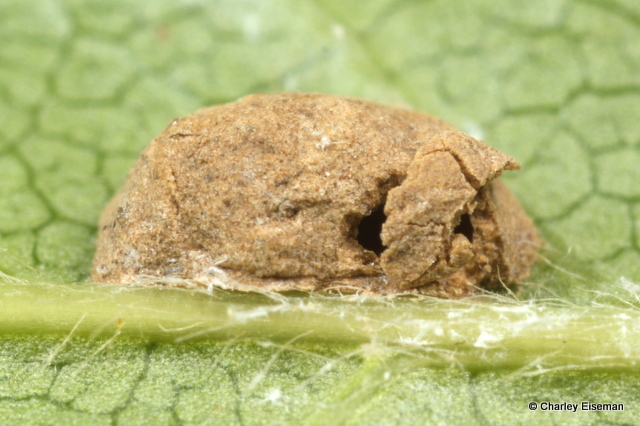 The egg cell from which the platygastrid emerged.

* Added 3/5/2012: Based on my photos submitted to BugGuide, Ovidiu Popovici says it is in fact a Trimorus.

I am a freelance naturalist, endlessly fascinated by the interconnections of all the living and nonliving things around me. I am the lead author of Tracks & Sign of Insects and Other Invertebrates (Stackpole Books, 2010), and continue to collect photographs and information on this subject. These days I am especially drawn to galls, leaf mines, and other plant-insect interactions.
View all posts by Charley Eiseman →
This entry was posted in Uncategorized and tagged beetle, Carabidae, Chlaenius, egg, ground beetle, larva, parasitoid, Platygastridae, predation, Trimorus, wasp. Bookmark the permalink.