This evening while on a walk I paused to look at some milkweed flowers, and an iridescent green jumping spider caught my eye.  She disappeared into the middle of the flower cluster, and as I was trying to figure out how to get a picture of her through all those flowers, I spotted a male jumping spider on the stem who was trying to get her attention. 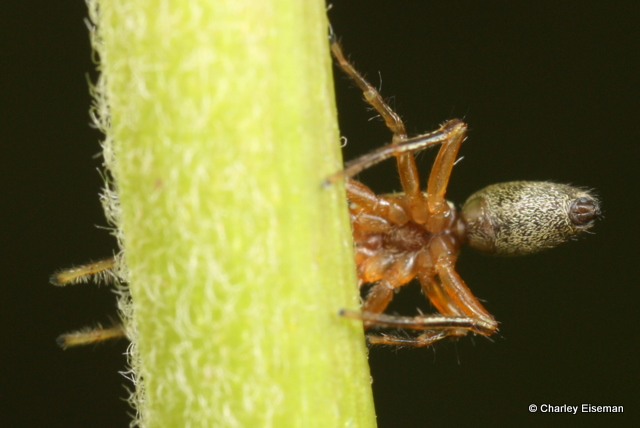 He was extending his two front legs in her direction and waving them about rhythmically. Eventually he hopped onto the flower cluster to try to get closer. 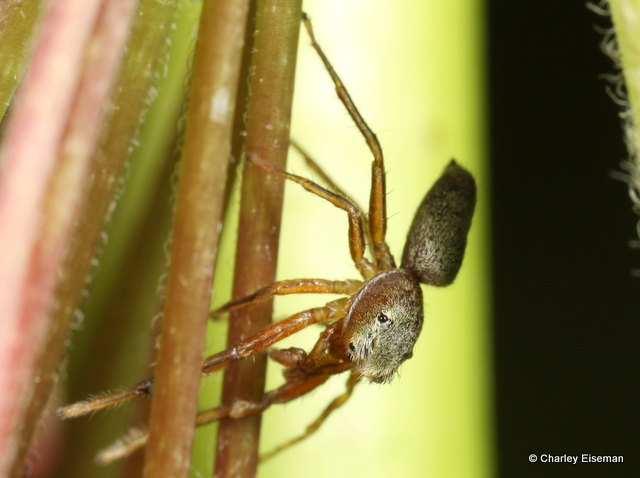 I spent a little while trying in vain to get shots that captured the motion of his silly little dance, then stepped back and looked for the female.  I found her at the top of the plant–while he was dancing for her, she had slipped away to catch a fly for dinner.

Eventually he realized where she was, and he sauntered up the stem to continue his performance for her.  Sometimes he would fling both his arms out simultaneously…

…and sometimes he would drum them alternately against the stem. 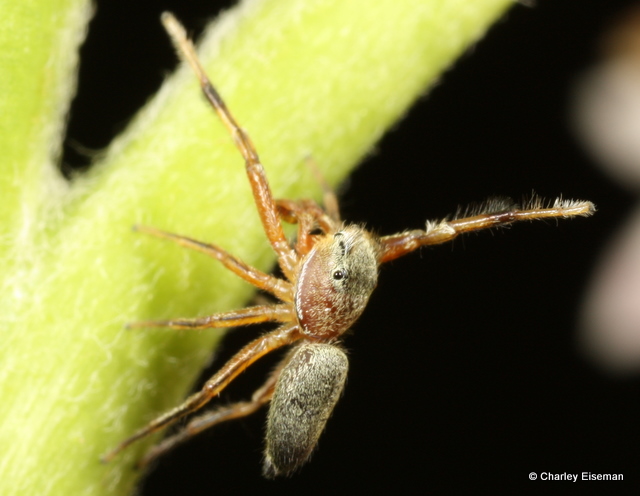 She continued to munch her fly and gaze wistfully into the distance.

Eventually he got within a half inch of her, but she remained unresponsive. 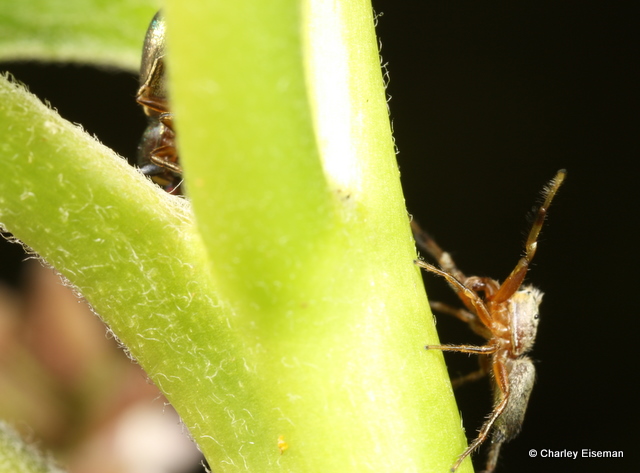 After she had finished her fly, she darted down the stem, and he ran from her.  She was continuing to forage, but he wasn’t getting the message, and he went back to slowly dancing his way toward her. I had seen enough, and continued on my way.

I called this post “dinner music” because there is actually an audio component to this courtship dance that is inaudible to human ears, and I was imagining the sound of his rhythmic drumming while she sat munching her fly an inch or two away. This article includes a silent video of a jumping spider dancing, and describes a second video that includes sound. The link to that one is dead, but the same video can be seen and heard here, for the time being anyway.  This is not the same dance that the spider above* was doing–I imagine that each jumping spider species has its own variation.

* Tutelina elegans.  Thanks to Kevin Pfeiffer for getting me to genus.

I am a freelance naturalist, endlessly fascinated by the interconnections of all the living and nonliving things around me. I am the lead author of Tracks & Sign of Insects and Other Invertebrates (Stackpole Books, 2010), and continue to collect photographs and information on this subject. These days I am especially drawn to galls, leaf mines, and other plant-insect interactions.
View all posts by Charley Eiseman →
This entry was posted in Uncategorized and tagged courtship, jumping spider, Salticidae, spider, Tutelina elegans. Bookmark the permalink.