Okay, so it doesn’t look like that ant from last night’s post is going to be going back to its everyday worker ant life today.  It was in the same position at 8:00 this morning, and here’s what I found when I checked it at noon:

I’m not certain of the cause of death, but I still think the ant was possessed by lancet liver flukes.  Take a look at the ant’s abdomen.  I had noticed in the second photo of last night’s post that there seemed to be a transparent area, showing up as a green patch right behind the white glare from the flash.  Well, here’s a closer crop of the above photo: 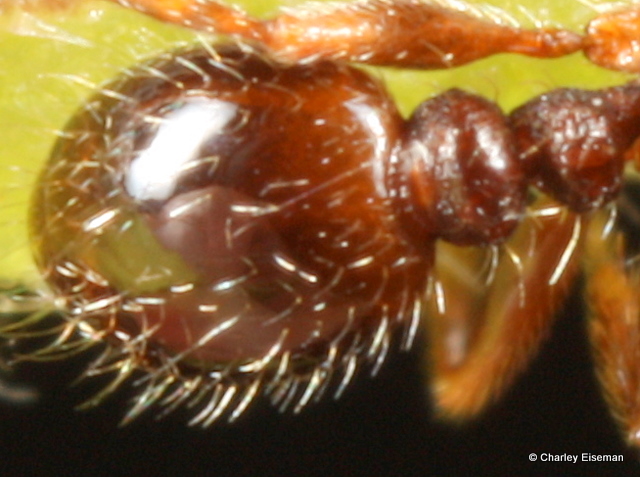 See those two blobby things–one in the middle of the gaster (the big, bulbous, terminal abdominal segment) and one on the right flank?  I confess I’m ignorant of the inner workings of ants, but I’m pretty sure that’s not what the inside of an ant is supposed to look like.  And I think the following series (shown in the order the photos were taken) demonstrates pretty clearly that those things are moving around.

(I think the wiry things in that last one are Malpighian tubules, formerly obscured by the blob that was on the right flank.) 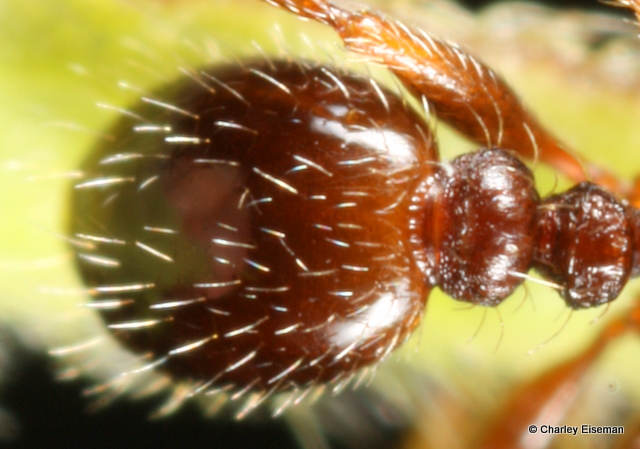 Okay, I suppose that’s enough of that.  So the moral of the story is, don’t go slurping snail slime.  And why did the ant’s head pop off?  I could spin some far-fetched tale about ant-decapitating flies being involved (and yes, those do occur in North America), but that would probably be a stretch.  I guess I’ll hang onto the ant just in case, though…

I am a freelance naturalist, endlessly fascinated by the interconnections of all the living and nonliving things around me. I am the lead author of Tracks & Sign of Insects and Other Invertebrates (Stackpole Books, 2010), and continue to collect photographs and information on this subject. These days I am especially drawn to galls, leaf mines, and other plant-insect interactions.
View all posts by Charley Eiseman →
This entry was posted in Uncategorized and tagged and-decapitating flies, ant, Dicrocoelium dendriticum, Formicidae, liver fluke, parasitism, pavement ant, Tetramorium. Bookmark the permalink.