Okay, I know you’re all dying to hear what strange and wonderful beetles I found in the slime mold I wrote about in my last post.  Well, I poked at the sporophore a bit, and out crawled a tiny, shiny beetle that could have passed for a mite.  After looking at it through my macro lens, I guessed that it was some kind of rove beetle–a member of the Staphylinidae, the world’s largest animal family.  With well over 4000 described species in North America, identifying one of these beetles is beyond me, but I submitted the photo below to BugGuide.net, and within an hour Vassili Belov had identified it as subfamily Scaphidiinae–the “shining fungus beetles,” among 26 rove beetle subfamilies to choose from–and more specifically the tribe Scaphisomatini. 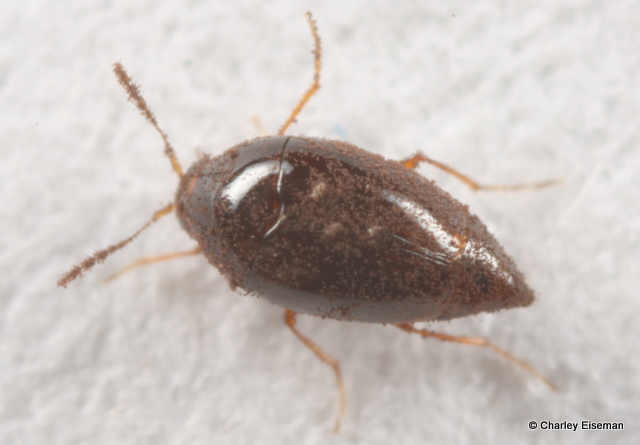 Armed with this name, I was able to do a little investigating*, and learned that just two genera, Baeocera and Scaphobaeocera, are slime mold specialists within this otherwise fungus-feeding group.  Among the 20+ beetle families that are known to include slime mold feeders, it is always just a few genera or species that have this habit, with the exception of the cryptic slime mold beetles (Sphindidae) which all feed exclusively on slime molds.

When I went to put this little beetle back where I found it, I noticed something moving under the mass of slime mold spores, so I scooped at this and found a much larger (but still small) beetle.  This one was about as generic-looking a beetle as I could imagine, but in short order Vassili Belov identified it as a round fungus beetle (Leiodidae) in the genus Anisotoma.  This is one of three closely related slime mold-feeding genera (Amphicyllis and Agathidium being the others) in this otherwise fungus-feeding family.**

If either of these beetles could fly, they didn’t let on.  This makes me wonder how they found the isolated slime mold patch, just a few inches across, in my front yard.  Even if they were able to fly to it, to me this is another impressive example of the ability of insects to detect from afar whatever it is they’re after and home in on it.  I already mentioned the leaf-mining moths finding my lone tuliptree sapling; another image that comes to mind is watching the carrion beetles streaming in from all directions to alight on a dead fisher.  My favorite example is the time I saw a click beetle buzz in from nowhere and disappear into the leaf litter the instant it hit the ground.  I peeled back the leaves at its point of impact and discovered that it (he, evidently) had pinpointed the exact spot where a pair of his fellow click beetles was mating.

I am a freelance naturalist, endlessly fascinated by the interconnections of all the living and nonliving things around me. I am the lead author of Tracks & Sign of Insects and Other Invertebrates (Stackpole Books, 2010), and continue to collect photographs and information on this subject. These days I am especially drawn to galls, leaf mines, and other plant-insect interactions.
View all posts by Charley Eiseman →
This entry was posted in Uncategorized and tagged Anisotoma, beetle, Coleoptera, Leiodidae, round fungus beetle, rove beetle, Scaphidiinae, Scaphisomatini, shining fungus beetle, slime mold, Staphylinidae. Bookmark the permalink.