On a recent crawl through the woods near my house, a white and thoroughly nondescript bracket fungus caught my eye.  It was so plain-looking that I didn’t imagine I would ever know its name, but looking in George Barron’s Mushrooms of Northeast North America, it seems like a pretty good match for Tyromyces chioneus.  In conducting a Google search for some more photos to compare mine with, I found that I’m not the first to be struck by this species’ blandness.  “Oh, sure, the world probably needs Tyromyces chioneus,” writes Michael Kuo, “but that doesn’t mean I have to get excited about it.”

My mycologist friends tell me that this identification is most likely correct, but that examination under a microscope would be required to distinguish this from other, much less common species of Tyromyces.  Anyway, I took on the challenge of finding something interesting on this unassuming, seemingly immaculate fungus.  I rolled over the dead branch it was growing on, and I saw a dozen or so little dark specks moving around on the white pores.  The photo below shows them as they looked with my lens set to 1x–the field of view is about 22 mm.

I extended the lens all the way to 5x to see what sort of springtails they were, and was shocked to discover that they were beetles. 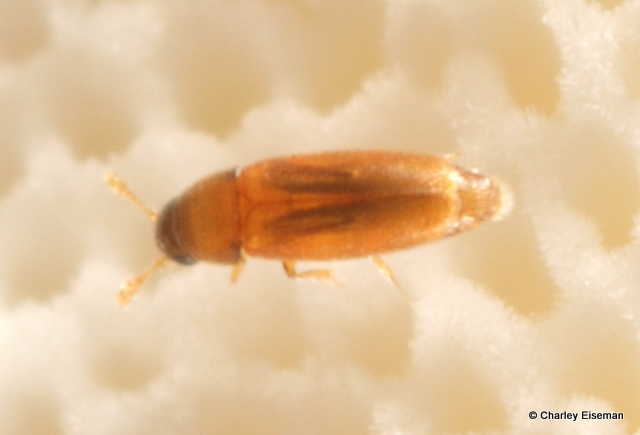 Based on how much of the 4 mm field of view these beetles filled, they were 0.35 to 0.4 mm long.  I hadn’t realized beetles could be quite this small.  They were just the right size to stick their front ends into the fungus’ pores, which they did repeatedly, presumably munching on the spores inside.

That night I went to BugGuide.net to see if I could figure out to which of the 131 North American beetle families these might belong.  I looked at the ten families with “fungus” in their common names, and none seemed right.  Then I thought maybe the extreme tininess would be the key.  My mind jumped to fairyflies (Mymaridae), the wasp family that includes the smallest known insect (down to 0.1 mm, according to this site), and I thought of the feathery wings that some mymarids have–like this one I found at the Berkshire BioBlitz this spring (at ~0.6 mm, apparently a gargantuan by mymarid standards):

In the same instant, I remembered this amazing image I had seen of a beetle with feathery hind wings.  Those feathery wings probably meant that beetle was small too, I thought… what was it called?  Featherwinged beetle?  Sure enough, it was, and according to BugGuide’s guide page for featherwinged beetles (Ptiliidae), they are “the smallest known beetles, most species being under 1 mm, and the smallest known being 0.35 mm.”  So by stopping to inspect that unassuming bracket fungus, I had stumbled on the very smallest beetles in the world.  (Added 10/13/11: Ptiliid specialist Gene Hall says these belong to the genus Nanosella.  Determining exactly which species would require dissecting a female. According to his page about the genus on the Tree of Life website, there are species even smaller than the one I found–down to 0.25 mm.)

The next morning I woke up thinking about all the tiny things with frilly wings.  The smallest moths are in the family Nepticulidae–not quite as tiny as beetles or wasps can be; the smallest have 1.5 mm wings.  Here’s one I found on my bedroom window this summer:

It’s got decent fringes on its forewings, but check out the pinned specimens here (the nepticulids are #0037-0114) and you’ll see the hind wings are almost all fringe.  And how about this furry little moth fly (Psychodidae) I saw in Kentucky–at ~0.5 mm body length, it’s about as small as a fly can get: 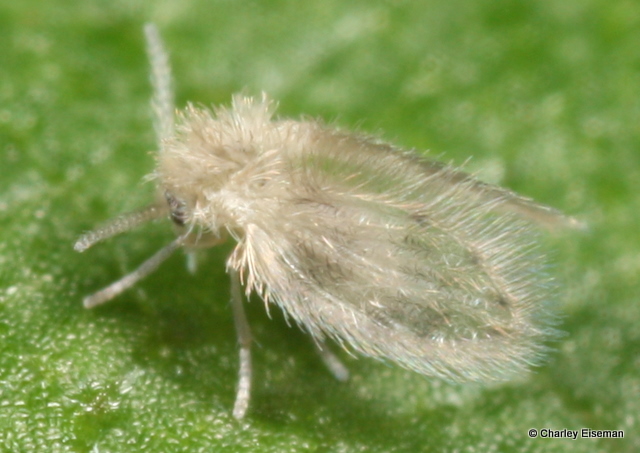 Fringed wings are the rule for thrips–which are usually around 1 mm long–giving their order its name: Thysanoptera, from the Greek thysanos, fringe, and pteron, wing. 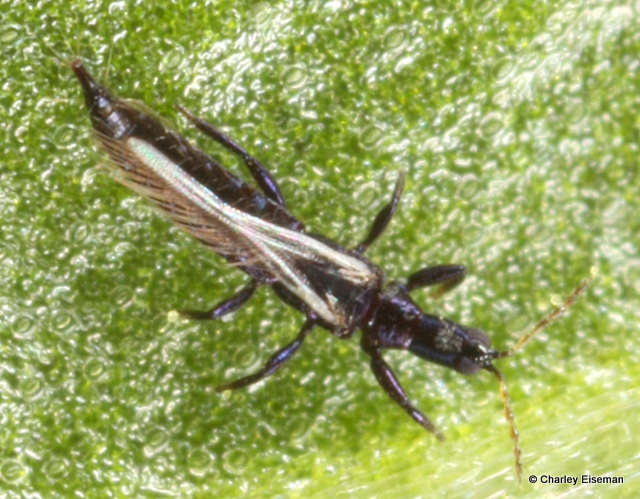 There must be some simple physical law that explains why these fringes are a good idea on tiny wings, but I can’t quite put my finger on it.  I brought this up with a friend who is into model airplanes, and he said something about the relative size of (and space between?) molecules in the air becoming more of an issue for tiny flying things, and something about turbulence, and how the frills somehow help with this.  I’m obviously still fuzzy on the details.  If you think you can explain it, I’d love to hear it!

I am a freelance naturalist, endlessly fascinated by the interconnections of all the living and nonliving things around me. I am the lead author of Tracks & Sign of Insects and Other Invertebrates (Stackpole Books, 2010), and continue to collect photographs and information on this subject. These days I am especially drawn to galls, leaf mines, and other plant-insect interactions.
View all posts by Charley Eiseman →
This entry was posted in Uncategorized and tagged beetle, chalcid, Coleoptera, Diptera, fairyfly, featherwinged beetle, fly, fungus, moth, moth fly, Mymaridae, Nanosella, Nepticulidae, Psychodidae, Ptiliidae, thrips, Thysanoptera, Tyromyces chioneus, wasp. Bookmark the permalink.