Last August I spotted a cocoon I didn’t recognize, nestled among some boneset (Eupatorium perfoliatum) flowers: 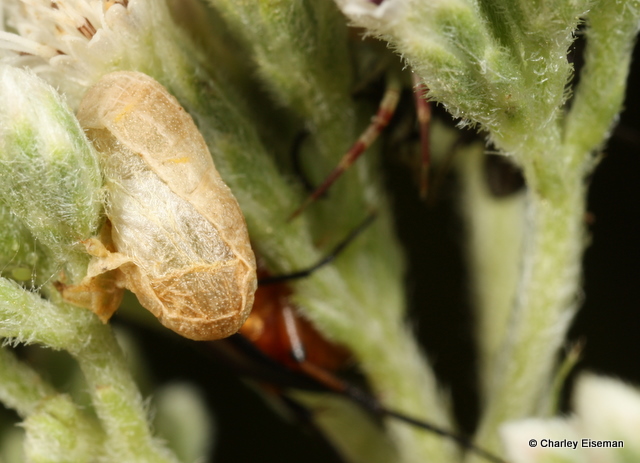 Before I get to that, I should mention that this photo also shows the stripey legs of a crab spider (Thomisidae), waiting to grab some insect that comes to visit the boneset flowers–something like this one: 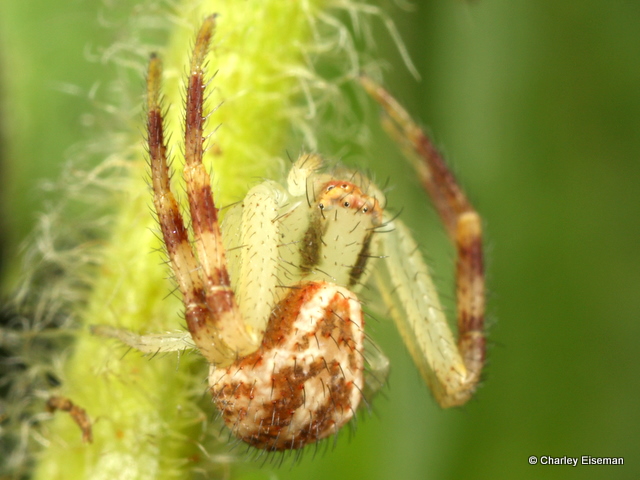 …And, directly behind the cocoon is this wedge-shaped beetle (Ripiphoridae):

Macrosiagon limbata belongs to the subfamily Ripiphorinae, which, as I mentioned in this post, is composed of species whose larvae wait on flowers to climb aboard bees and wasps in order to ride them back to their nests and parasitize their larvae.  Females lay eggs among flowers, but this one is a male, as evidenced by his fancy antennae. 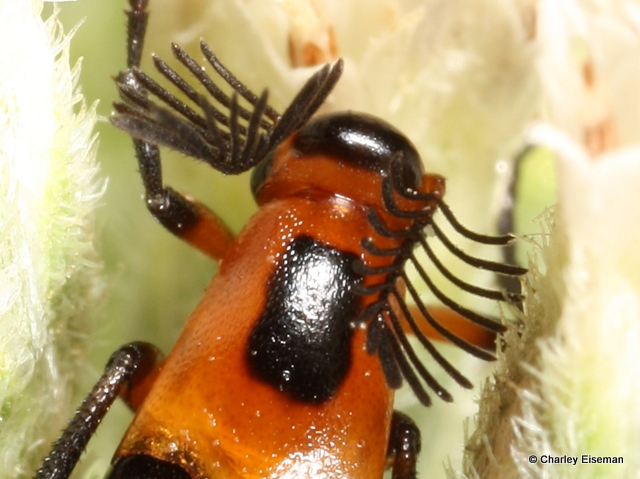 Anyway, I collected the cocoon, and a week later this wasp emerged: 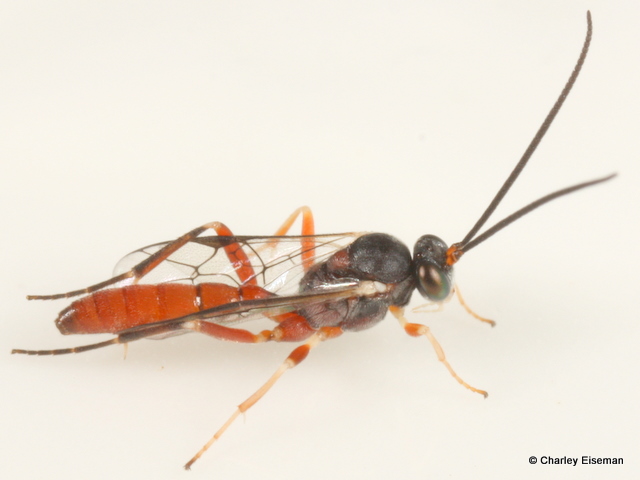 Bob Carlson identified it as a Hyposoter species (Ichneumonidae: Campopleginae).  I took another look at the cocoon, and saw that rather than being plain white, as was my initial impression, it has a white central band and is otherwise a pale brown, which is a pattern I’ve seen on other campoplegine cocoons.  I also realized that the odd texture of this cocoon is the result of its having the skin of the parasitized caterpillar draped over it.  Both the cocoon pattern and the condition of the caterpillar distinguish this from the work of a braconid wasp larva, which would have a truly plain cocoon and would typically not devour the caterpillar so thoroughly.

The only other Hyposoter specimen on BugGuide.net emerged from this cocoon (note the caterpillar remains nearby), which is boldly patterned like the one in my last post. Evidently this genus produces a variety of cocoons, which makes sense given Bob Carlson’s comment in the 1979 Catalog of Hymenoptera:

It seems to me that Hyposoter, as presently defined, includes as bewildering a diversity of forms as any genus in the family. It would appear that the task of breaking the genus into smaller ones that are more meaningful phyletically will require a great deal of research that is not likely to be accomplished soon.

For further evidence of the diverse habits of this genus, see the comment Bob left on this website:

I wonder what Darwin might have said about the false cocoons that are spun by a few species [of] Ichneumonidae of the genus Hyposoter. These species spin their real cocoons inside the skins of hairy caterpillars, and the cocoon keeps the skin of the caterpillar firmly inflated. On the outside of the skin, the Hyposoter larva spins a small false cocoon that is quite similar in appearance to the cocoons of braconid wasps of the genus Cotesia. The false cocoon is left open at one end, and resembles a Cotesia cocoon from which the Cotesia adult has already emerged. The empty false cocoon is presumed to be a mechanism that helps to protect the Hyposoter individual in the real cocoon from being attacked by hyperparasitic wasps.

Here is an example of what open Cotesia cocoons on a hairy caterpillar would look like, but the Hyposoter‘s false cocoon would be solitary.

As for whose skin that is draped over the cocoon I found, I checked the HOSTS database and found that very few caterpillars are recorded as feeding on boneset.  The most plausible of these seemed to be Schinia trifascia (the three-lined flower moth; Noctuidae), given that caterpillars of this species feed on flowers, and that I found an adult nearby. 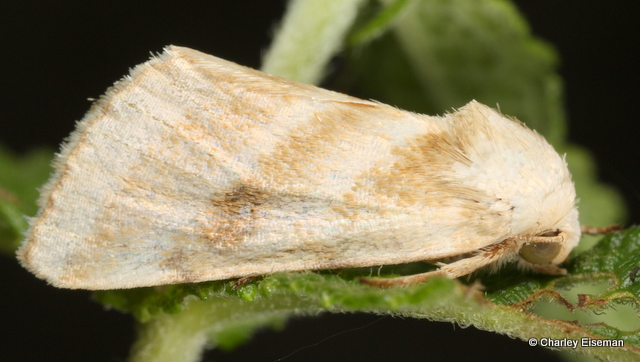 However, it seems that no Hyposoter is known to parasitize a Schinia, and when I suggested this possibility to Bob, he replied: “My mind’s eye is suggesting that this may be Hyposoter synchlorae, which has been reared from Synchlora aerata, which, in turn, is known to feed on flowers of Eupatorium.”  The link he referenced shows Synchlora aerata feeding on Eupatorium rugosum, white snakeroot, which is now Ageratina altissima, but Synchlora caterpillars feed on a wide variety of flowers in the aster family, so this does seem plausible.  If that’s who it was, evidently the caterpillar’s costume of flower pieces fell off by the time I found its remains.

I am a freelance naturalist, endlessly fascinated by the interconnections of all the living and nonliving things around me. I am the lead author of Tracks & Sign of Insects and Other Invertebrates (Stackpole Books, 2010), and continue to collect photographs and information on this subject. These days I am especially drawn to galls, leaf mines, and other plant-insect interactions.
View all posts by Charley Eiseman →
This entry was posted in Uncategorized and tagged Campopleginae, Hyposoter, ichneumon wasp, Ichneumonidae, moth, Noctuidae, parasitoid, Ripiphoridae, Schinia trifascia, three-lined flower moth, wedge-shaped beetle. Bookmark the permalink.