On September 8 last year, while conducting a survey of galls and leaf mines of Nantucket, Noah Charney, Sydne Record, and I came across this rosette gall on seaside goldenrod (Solidago sempervirens) at the west end of the island:

As I mentioned previously, there are several different goldenrod rosette galls and I’m not very familiar with them, so we bagged this one to examine later.  By the time I got home, midges were already emerging from it.

I picked up my copy of Raymond J. Gagné’s Plant-feeding Gall Midges of North America, and the closest match I could find was the gall of Asphondylia monacha, in which the larval cells are lined with white mycelium of symbiotic fungi.  I picked the gall apart some and found this to be the case. 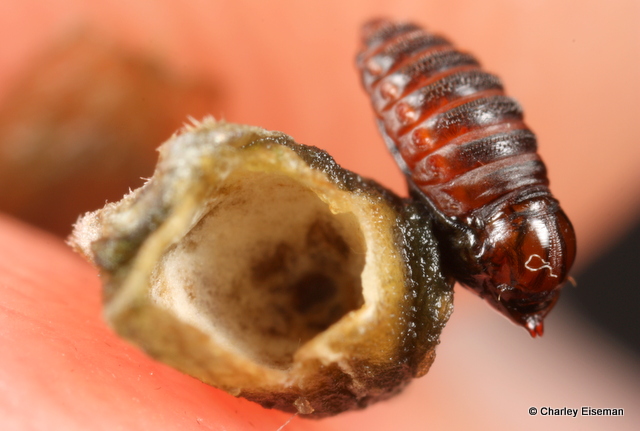 Broken open larval cell, showing the white fungal lining and the pupa that was inside.

However, reading the fine print, it seemed that A. monacha is specific to early goldenrod (S. juncea).  I wrote Dr. Gagné for his thoughts, including a photo of an adult, and he said it was indeed an Asphondylia, but as far as he knew no one had ever found a gall like this on seaside goldenrod.  He had specifically looked for such galls in Maryland, where he lives. He forwarded my message to Netta Dorchin, who as luck would have it is currently working on a paper on Asphondylia galls.  I sent her the midges, and just yesterday, as I was leaving Nantucket after another week of surveying, she wrote to me and said DNA analysis has confirmed that this is a new species, most closely related to one that has been reared from similar galls on silverrod (S. bicolor) in Virginia.

Dr. Dorchin would love to have more material on which to base her description of the species, particularly larvae (I was only able to send her adults and pupae) and intact galls (the one I collected had turned to mush by the time I was ready to send it).  I searched every patch of seaside goldenrod I found this past week, but never saw any more galls.  So if you live along the Atlantic coast, please see if you can find any in the next couple of weeks.  I gather from this map that seaside goldenrod can also be found along the shores of the Great Lakes (but apparently not Lake Champlain, even though Champlain Sea relics like beachgrass and beach pea can still be found there).  I will be working along the Maine coast later this month, so there is some chance that I will find a gall or two myself, but the more the merrier.

Last fall I happened to catch one of the midges in the act of emerging from its pupa.  I took so many pictures that when I flip through them quickly it makes a pretty good animation, but the ones below give a pretty good sense of it. 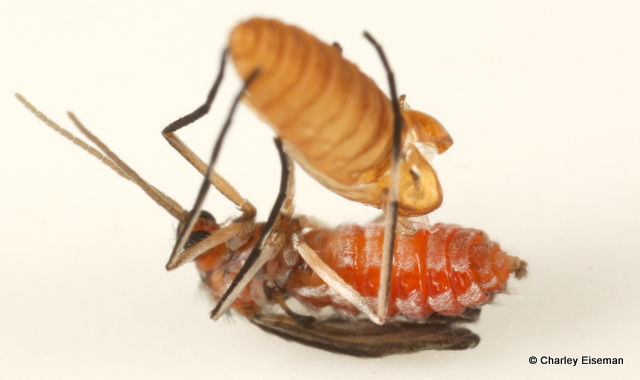 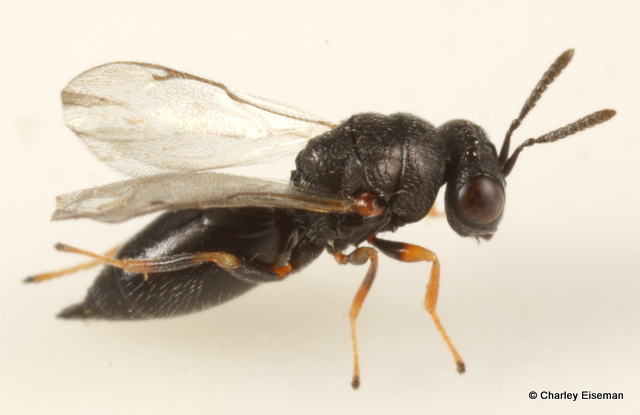 I am a freelance naturalist, endlessly fascinated by the interconnections of all the living and nonliving things around me. I am the lead author of Tracks & Sign of Insects and Other Invertebrates (Stackpole Books, 2010), and continue to collect photographs and information on this subject. These days I am especially drawn to galls, leaf mines, and other plant-insect interactions.
View all posts by Charley Eiseman →
This entry was posted in Uncategorized and tagged Asphondylia, Cecidomyiidae, chalcid, Diptera, Eurytomidae, fly, gall, gall midge, goldenrod, goldenrod rosette gall, midge, Nantucket, new species, parasitoid, seaside goldenrod, Solidago, Solidago sempervirens, wasp. Bookmark the permalink.