Mysteries on a Shadbush Leaf

Posted on September 28, 2012 by Charley Eiseman

Yesterday I woke up somewhere in western Montana (in the Lolo National Forest, to be a little more precise) and, as I’ve been doing wherever I find myself lately (national parks, rest areas, city streets, backyards, etc.), I had a look around to see what leafminers I could find.  At this particular spot I only found one type, on some kind of shadbush (Amelanchier).

The elongate brown area in the center of the photo is an “underside tentiform mine,” characteristic of certain moth genera in the family Gracillariidae.  The brown areas at the top and bottom of the photo are “skeletonizing,” feeding on the outside of the leaf by some other insect.  The object on the lower right corner of the leaf is bird poop.

In an underside tentiform mine, the larva feeds on the sap in a discrete area just beneath the lower leaf epidermis, then feeds more deeply, consuming tissue in the same area.  It spins silk inside the mine, which contracts as it dries and causes the leaf to buckle, forming a “tent” that gives the larva a little more room to move around.  On rosaceous trees and shrubs (shadbush, apple, cherry, plum), mines of this type could be the work of Phyllonorycter or Parornix species.  A Phyllonorycter larva would complete development inside the mine, leaving its pupal skin protruding from the lower surface of the mine when the adult moth emerges.  A Parornix larva would leave the mine and complete its development feeding inside a flap it makes at the edge of the same or another leaf, eventually transforming in a cocoon inside this flap or elsewhere.  I flipped over this leaf to see if I could figure out which I was looking at, and here’s what I saw: 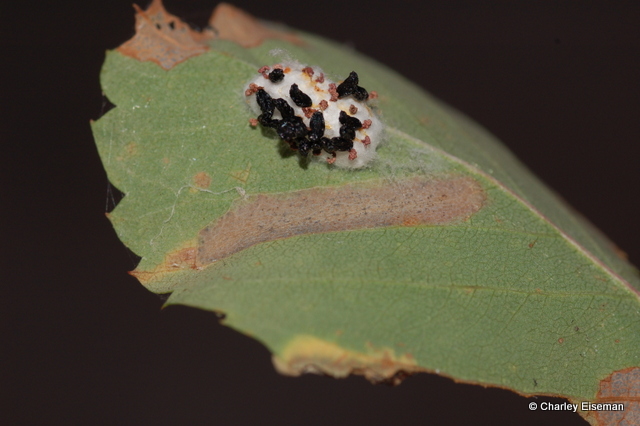 It’s too early to say what kind of moth made this mine, since there is no exit hole and the larva is evidently still feeding inside.  But what the heck is that thing stuck to the leaf next to the mine?

Looking at the other side, it becomes clear what the white object is: 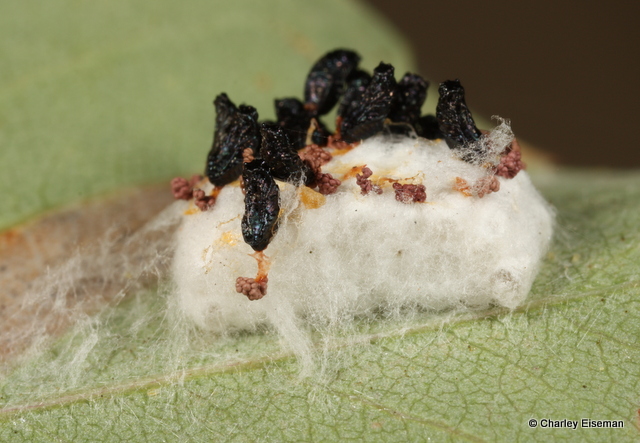 It is a “logpile” of braconid wasp cocoons (probably in the genus Cotesia), formed under a parasitized caterpillar from which the wasp larvae emerged.  (This would have been a much larger caterpillar than the one that made the leaf mine.)  If you look closely at the last photo you may be able to make out the the cylindrical shapes of some of the individual cocoons.  (The outer layer of silk obscuring the individual shapes may have been spun by the parasitized caterpillar, as seen here.)

The black objects on top of the cocoon pile are the pupae of eulophid wasps (genus Eulophus), which are also caterpillar parasitoids (I don’t remember offhand whether they are internal or external parasitoids.  I have read conflicting things about them and I’m not sure which turned out to be true).  They have been called “tombstone pupae” because they typically stand upright on a leaf, and a cluster of them marks the site where a caterpillar died.  The little brown clusters next to the pupae are the larval meconium–all of the waste produced in each wasp larva’s life, deposited in a single pile just before pupating.

I have seen these braconid cocoon “logpiles” and eulophid “tombstone pupae” plenty of times before, but this is the first time I’ve found them together.  I can only assume that the same hapless caterpillar was parasitized by both braconids and eulophids.  As far as I know Eulophus larvae can’t be hyperparasitoids (parasitizing the braconid larvae), and there don’t seem to be any exit holes in the braconid cocoons.

I am a freelance naturalist, endlessly fascinated by the interconnections of all the living and nonliving things around me. I am the lead author of Tracks & Sign of Insects and Other Invertebrates (Stackpole Books, 2010), and continue to collect photographs and information on this subject. These days I am especially drawn to galls, leaf mines, and other plant-insect interactions.
View all posts by Charley Eiseman →
This entry was posted in Uncategorized and tagged Amelanchier, Braconidae, chalcid, cocoon, Cotesia, Eulophidae, Eulophus, Gracillariidae, leaf mine, moth, parasitoid, Rosaceae, shadbush, wasp. Bookmark the permalink.

5 Responses to Mysteries on a Shadbush Leaf