Life in an Old Phoebe Nest

Thanks for all the suggestions of places to go in the Southeast! I’ve got some good leads and a number of generous offers from people I’ve never met.

Meanwhile, I’ve made it to the end of last May in my photo sorting, which (if I remember correctly) brings me to the conclusion of a chapter that began on March 19 when I saw that the local phoebe had returned from its wintering grounds. This prompted me to remove its old nest from the little platform under the eaves of the shed, so it would have a spot to make a new one.  When I picked up the nest, I discovered several long, skinny, pointy-ended fly larvae under it:

They looked just like the stiletto fly (Therevidae) larvae that I had determined to be the makers of curious squiggly burrows in the Coral Pink Sand Dunes in Utah four years earlier.  I thought it would be interesting to raise a few, so I stuck the nest in a container. As I did so, I noticed that there were a number of much smaller moth larvae also living in the nest:

…as well as the tiny spiderling of some sort of cobweb spider (Theridiidae): 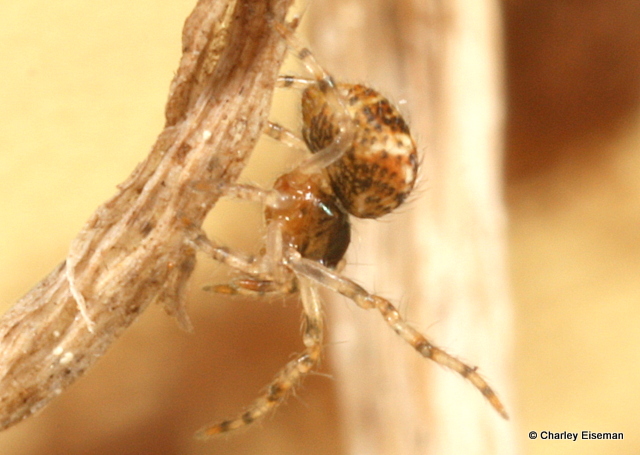 Over a month later (on April 27), nothing had emerged, but I spotted another tiny cobweb spiderling–the same kind I had found the previous spring with an ichneumon wasp larva attached to it: 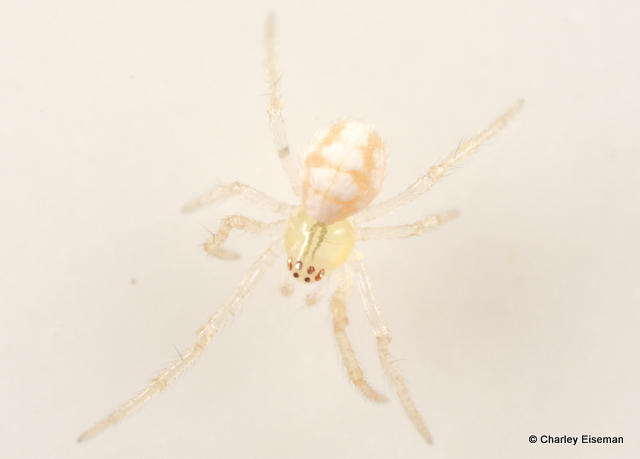 I’ve seen this type of spiderling one other time, sitting on a bluet flower and eating a frit fly. Anyway, a few days later, on May 3, the moths began to emerge:

This moth is probably Niditinea orleansella, and belongs to the family (Tineidae) that includes clothes moths.  The larvae of a lot of tineids feed on debris of plant, fungal, or animal origin.  Some are generalists and others have very particular tastes–like the species that specializes on the keratin of old gopher tortoise shells.

The first spiderling had spun a web by this point, and was catching and feasting on some of the moths.  On May 29, I checked the container and saw that it had caught a fly–and had also grown enough to be recognizable as a common house spider (Parasteatoda tepidariorum):

I managed to rescue the other flies from its clutches.  They clearly were not stiletto flies.

They turned out to be members of a closely related family I had never heard of before–Scenopinidae, the “window flies.”  According to BugGuide, they are often found on windows inside homes because the larvae feed on pests associated with human activities.  The ones I found were probably feeding on some of the moth larvae.  Martin Hauser identified them as belonging to the genus Scenopinus, adding that they often eat dermestid beetle larvae (e.g. carpet beetles)–so not a bad fly to have around the house.  He also mentioned that some scenopinid larvae live in loose soil and sand dunes much like their cousins, the stiletto flies, and others live in the tunnels of wood-boring beetles and feed on the beetle larvae.

I am a freelance naturalist, endlessly fascinated by the interconnections of all the living and nonliving things around me. I am the lead author of Tracks & Sign of Insects and Other Invertebrates (Stackpole Books, 2010), and continue to collect photographs and information on this subject. These days I am especially drawn to galls, leaf mines, and other plant-insect interactions.
View all posts by Charley Eiseman →
This entry was posted in Uncategorized and tagged bird, clothes moth, cobweb spider, common house spider, Diptera, eastern phoebe, fly, larva, moth, nest, Niditinea orleansella, Parasteatoda tepidariorum, Sayornis phoebe, Scenopinidae, Scenopinus, spider, spiderling, Theridiidae, Theridion, Tineidae, window fly. Bookmark the permalink.