Posted on February 5, 2013 by Charley Eiseman

Two days after I posted his photos and suggested that examining the exuviae at the ends of the tubes might help to solve the mystery, Judhajit Dasgupta reported back to me:

Following your cue I had searched the plant and I think I have found the culprit. It I am correct, it is some member of Hemiptera, to me it has some superficial resemblance to spittle bug larvae. The casings are, on all probability, made of their excreta — as they are usually.

This was certainly not an option that I had considered, but I had to agree with his assessment.  The exuviae shown in this photo do resemble those of a spittlebug (Cercopidae)… 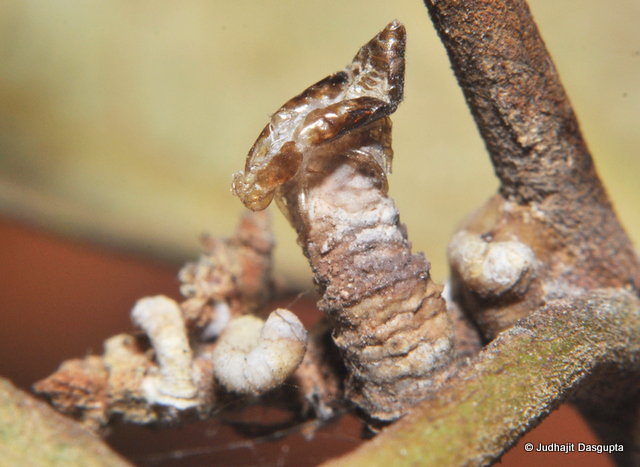 …especially when viewed in connection with this nymph found on the same plant: 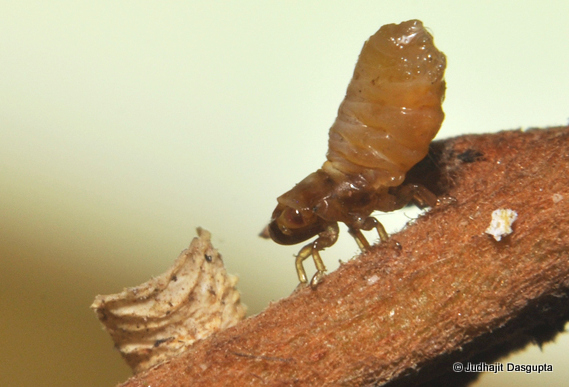 I forwarded our correspondence to Andy Hamilton, who replied:

You are absolutely right – these tubes are indeed produced by a spittlebug-like insect (froghopper) known as Machaerotinae, only found in the old-world tropics, Japan and Australia. The tubes are formed by hardened exudates from the malphigian tubules, the same goop that makes the spittle bubbles gelatinous when the insect is molting. In fact, one of the photos shows the cast-off juvenile skins (exuviae) clinging to the mouths of the tubes, which is the first indication we have that these insects molt before emerging from the protective tube.

At a guess, I would say that the genus involved here is Machaerota which makes straight or wormlike tubes that stand out from the twigs. Adults have a spine on the back that extends across the wings, but lack head and pronotal processes found in related genera. There are a few such related genera described from India, but they are rare.

Dr. Hamilton in turn forwarded the photos to Chandrashekara Viraktamath, who confirmed the genus:

As Andy mentioned these are tubes produced by the immature stages (nymphs) of species of Machaerota. They are very common on Ziziphus, gooseberry plants and others. However, species involved may be different. I would need adult specimens for identification as there are no keys for the Indian nymphs of this family.

And so another mystery is solved.  To clarify some of the common and scientific names used here: “Froghoppers” and “spittlebugs” are both names for insects in the traditional family Cercopidae, which has recently been elevated to superfamily Cercopoidea.  The latter name refers to the spit-like substance with which the nymphs surround themselves. The status of the “tube spittlebugs,” which include the genus Machaerota, is still being worked out.  Dr. Hamilton has proposed that they should be considered a subfamily (Machaerotinae) of the family Clastopteridae, which in North America is represented by the genus Clastoptera.  The tube spittlebugs were previously considered a full family, Machaerotidae, and may eventually be restored to this status (see this site, which includes photos of horizontal and spiral tubes of other tube spittlebug genera).

Added 2/11/2013 – Judhajit found an adult spittlebug on these jujube plants: 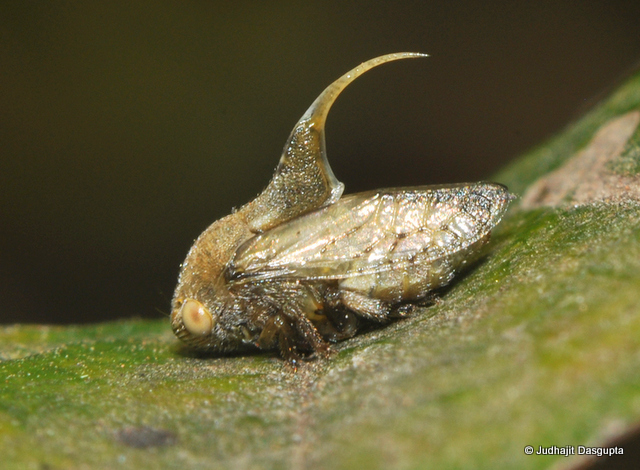 According to the latest revision of Machaerotine froghoppers (Maa 1963) your specimen appears to be a pale individual of Machaerota spangbergii Signoret, figured by Distant (1916) on p. 183 as M. noctua, apparently a darker form of the same species. This has the shortest head in the genus, and also a distinctive pale spot on the tibia of the hind leg, clearly visible in your photo. The host plants for this species are recorded as Zizyphus jujube and Aegle marmelos, suggesting that two biologically different species are presently linked under this name. It would be good to collect a series of adults and nymphs, if possible, to determine the limits of variation on Zizyphus.

Thanks, and keep up the good work!

I am a freelance naturalist, endlessly fascinated by the interconnections of all the living and nonliving things around me. I am the lead author of Tracks & Sign of Insects and Other Invertebrates (Stackpole Books, 2010), and continue to collect photographs and information on this subject. These days I am especially drawn to galls, leaf mines, and other plant-insect interactions.
View all posts by Charley Eiseman →
This entry was posted in Solved Mysteries and tagged Cercopidae, Cercopoidea, Clastopteridae, froghopper, India, jujube, Machaerota, Machaerota spangbergii, Machaerotidae, Machaerotinae, Rhamnaceae, spittlebug, tube spittlebug, Ziziphus. Bookmark the permalink.