Cribellate Spiders, and Some More Thoughts on that Mysterious Thing from Peru

Posted on September 9, 2013 by Charley Eiseman

Photos of this intricate silken structure, to which I shared my immediate reactions here, have been spread around sufficiently that it’s pretty clear nobody (at least nobody with access to the internet) knows what made it. 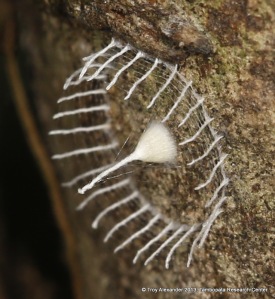 I did have another thought or two about it that I wanted to share, though.  Troy Alexander, the photographer and discoverer of this thing, left a comment on my previous post with a link to some additional photos he’d posted on the Rainforest Expeditions Facebook page.  One of them was this closeup:

As I said previously, I believe the object in the middle is a spider egg sac rather than an insect cocoon because all the delicate silk threads anchoring it to the substrate had to have been spun from the outside, which would be impossible for an insect larva that was already sealed inside it.  True, there are a few insects that cover their eggs with silk, but as far as I know, those that do (such as barklice and water scavenger beetles) all construct a simple mesh of webbing or a plain silken case, not anything approaching this ornate structure. Mimetus notius, a pirate spider (Mimetidae), makes a silken protection for its eggs that is more similar than anything I know of in the insect world.  The egg sac itself is a dense sphere of white silk with a loose covering of curly golden silk, but this in turn is surrounded by a large bubble of crisscrossing silk threads that present a barrier to any insect predators or parasitoids attempting to reach the egg sac.

This outer bubble may not resemble the construction of the “fence” surrounding the Peruvian egg sac, but what about this?

This, of course, is a detail of the snare web of an orbweaver (Araneidae).  The construction is the same as in the “fence”; a continuous strand of silk is spun perpendicularly to a series of evenly spaced supports.

As for the shape of the egg sac itself, Neospintharus trigonum (Theridiidae) demonstrates that a spider is capable of constructing an egg sac with a thick stalk projecting from a conical base.

Anyway, Troy’s closeup reminded me of the frizzy silk produced by cribellate spiders. Upon reading this National Geographic article today, I saw that someone else had made the same connection.  Though the article states at the beginning that “scientists have no idea what made [the object] or what its purpose might be” and that “most agree it was likely built by an insect,” near the end it mentions that Troy’s leading hypothesis is that a spider is responsible, citing a suggestion by a reddit reader.  The article goes on, “Instead of spinnerets, or silk-spinning organs, some spiders have what’s called a cribellum, which, instead of spinning silk fibers, pushes the molecules through a fine mesh.”  I don’t see any mention of cribellate spiders (those that possess a cribellum) on the reddit post devoted to this mystery object, so I’m not sure who that suggestion came from*, but I thought I’d add a few visuals to explain and support this idea.

Cribellate spiders have two structures that distinguish them from other spiders: the cribellum, which pushes out many fine strands of silk, and the calamistrum, which is a row of leg bristles that the spider uses to comb the silk and produce a woolly texture.  Cribellate spiders do not produce silk with sticky droplets; instead, their insect prey simply becomes caught in the tangle of fine, woolly fibers*.  This difference is evident in a close-up photograph.  The sticky droplets can be clearly seen in my web photo above; in fact, the silk itself is nearly invisible.  In a similar detail of a cribellate orb web, you would see no droplets and the silk would appear more thick and messy.  Apparently I haven’t yet taken a picture with the specific purpose of illustrating this, but you can see a bit of what I’m talking about in this detail of the web of a feather-legged orbweaver (Uloboridae: Uloborus glomosus), which was originally a nice, neat orb web, but was damaged by the struggle to subdue a jumping spider:

Compare the (somewhat out-of-focus) thread across the lower half of the photo with the ones parallel to the substrate in the detail of the mystery fence.  (The round, yellow objects in the right side of my photo are pollen grains.)

In addition to the cribellate orbweavers (Uloboridae), other cribellate spiders include lampshade weavers (Hypochilidae) and crevice weavers (Filistatidae).  The frizziness of the silk in some of these spiders’ webs is evident even at the macro level, as in the following examples.

It is believed that the common ancestor of all true spiders (i.e. infraorder Araneomorphae as opposed to Mygalomorphae, the latter being tarantulas, trapdoor spiders, etc.) was a cribellate spider, and that the cribellum and calamistrum have been lost by many groups in the course of evolution.  I think it is also generally believed that the first silken structures produced by spiders were egg sacs, and that insect-catching snare webs followed from these.  At first a loose tangle of webbing around egg sacs might have incidentally trapped a few insects, and since many female spiders stay with their eggs to guard them, they would have been able to take advantage of this accident and eat what was caught.  Those that spun more elaborate networks of webbing around their egg sacs (like the pirate spider example above) would have a distinct evolutionary advantage.

Now I wonder how this Peruvian structure fits into this story.  It’s interesting to imagine that orb webs arose from similar “fences” surrounding egg sacs, though if this were the case I would think these things would be found in more places than one spot in the Amazon.  Could the fence, conversely, be derived from an orb web, or is it a totally unrelated structure?  The idea that it is made of cribellate silk suggests that it may not only prevent ants and tiny parasitic flies and wasps from getting access to the egg sac, but may also capture them as they attempt to approach it.  If so, the females that construct the fences apparently don’t hang around to take advantage of this; do the emerging spiderlings feast on their trapped would-be assailants?

I am a freelance naturalist, endlessly fascinated by the interconnections of all the living and nonliving things around me. I am the lead author of Tracks & Sign of Insects and Other Invertebrates (Stackpole Books, 2010), and continue to collect photographs and information on this subject. These days I am especially drawn to galls, leaf mines, and other plant-insect interactions.
View all posts by Charley Eiseman →
This entry was posted in Unsolved Mysteries and tagged Araneidae, Argyrodinae, cobweb spider, crevice weaver, cribellate, Filistatidae, Hypochilidae, kleptoparasitic cobweb spider, lampshade weaver, Mimetidae, Mimetus notius, Neospintharus trigonum, orbweaver, pirate spider, spider, Theridiidae, Uloboridae, Uloborus glomosus, web. Bookmark the permalink.

22 Responses to Cribellate Spiders, and Some More Thoughts on that Mysterious Thing from Peru