I should probably begin this post by introducing you to the featured plant, with which I think few people are familiar, despite its being right up there with bastard toadflax and mad-dog skullcap among the plants with the best common names.  The plant is enchanter’s nightshade (Circaea canadensis, a.k.a. C. lutetiana), and is actually in the evening primrose family (Onagraceae), having nothing to do with true nightshades (Solanaceae) such as tomatoes, potatoes, and eggplants.  It’s such a common and unassuming plant that apparently I’ve never bothered to get a decent photo of it, but its flowers are similar to those of its close relative, dwarf enchanter’s nightshade (C. alpina): 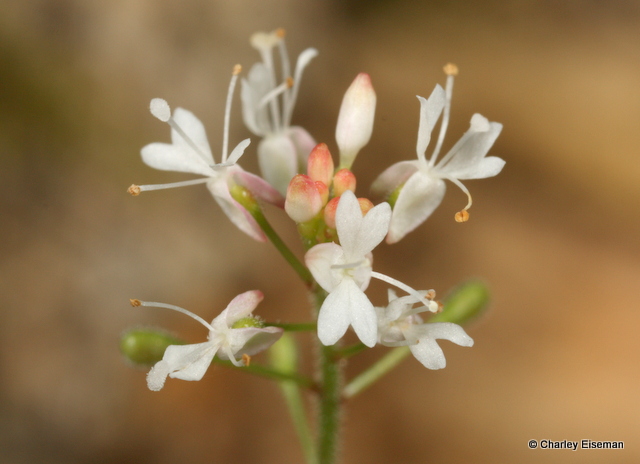 If you look closely at the lower left flower, you can see a fuzzy green fruit beginning to form beneath it.  The barely presentable photo below shows a C. canadensis plant with more mature fruits.  You may recognize them as the little green burs you sometimes have to pluck from your dog (or perhaps your hairy legs). 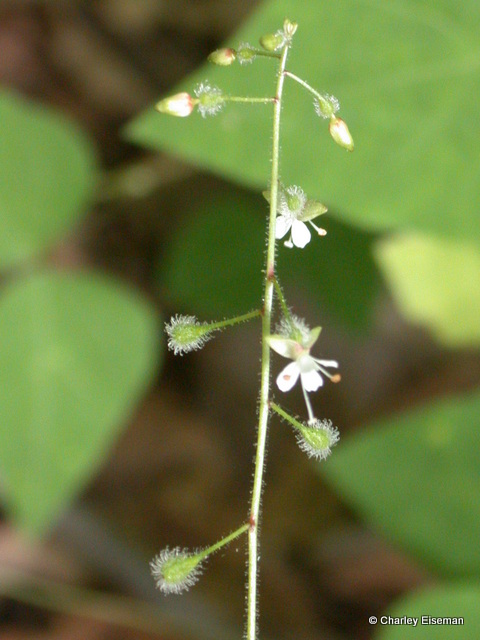 Below this flowering raceme are a few pairs of opposite, long-petioled leaves.  In the example below, two new branches are starting because some browsing mammal has munched off the raceme.

In the lower left of this photo is a leaf mine.  I am pretty much perpetually scanning plants for leaf mines at this point, but I was paying special attention to enchanter’s nightshade this year because of some perplexing leaf mines that had been posted to BugGuide in 2011, from which the larvae had been pushing out all their excrement from little holes at the edges.  The only known leafminer in enchanter’s nightshade is Mompha terminella (a moth), but in the example shown at the top of this page, there is plenty of excrement in the mine.  I had brought the photos to the attention of Terry Harrison, whose website that is and who happens to be working on a revision of the genus Mompha.  He agreed that this insect was definitely not Mompha terminella.

Flipping over the above leaf, I found little squiggles of excrement on the underside, confirming my suspicion that I had found the mystery miner.

I collected several leaves containing these larvae, and within a few days noticed that the larvae had stopped carefully disposing of their waste.  Some moved to fresh leaves, never returning to their earlier habit of pushing the excrement out.  I repeated this observation with mines collected from two or three different locations.  Eventually the larvae spun cocoons, and adult moths began to emerge: 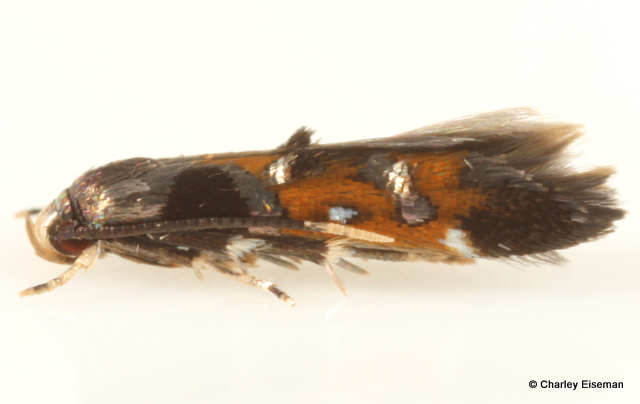 They sure looked like Mompha terminella to me, and Terry confirmed this.  Apparently he had never found the mines in an early enough stage to observe this behavior, and for whatever reason Annette Braun neglected to mention this unusual detail when she described the species’ life cycle in 1915.  She only wrote that “the earliest mine is a narrow, threadlike, sometimes spiral, tract, which abruptly enlarges into a small blotch.  Several successive blotches are formed, the last occupying almost half of one of the larger leaves.”

Of course, moths were not all that emerged in the vials containing these leaf mines.  One parasitoid emerged, a braconid wasp in the subfamily Microgastrinae:

To my surprise, this leafhopper also emerged:

Scouring the leaves, I was able to find its nymphal exuviae:

Perhaps I shouldn’t have been surprised to find a leafhopper in the vial.  Looking at the leaves in my first photo above, they are conspicuously speckled with pale spots from leafhoppers sucking their juices (also visible in these two close-ups).  And in my photo of the underside of the mine, you can even see the leafhopper as a nymph, near the lower right corner!

I posted this leafhopper on BugGuide recently, and Chris Mallory quickly suggested it was Erythroneura (Erasmoneura) atra.  Looking at the existing photos on BugGuide, I saw Andy Hamilton’s comment here, thanking Claude Pilon for the new host record: enchanter’s nightshade.  Claude and I both found these leafhoppers this summer, and evidently their host plant was previously unknown.  I also gather from the comments here that this species was not even known to occur in notheastern North America until some time in the past two years when Tom Murray gave Andy a specimen from Massachusetts. There is so much to be learned from just choosing a plant and taking a close look at what’s eating it.

The only other insect I can remember seeing feeding on enchanter’s nightshade is a dumpy-looking little weevil named Dietzella zimmermanni. 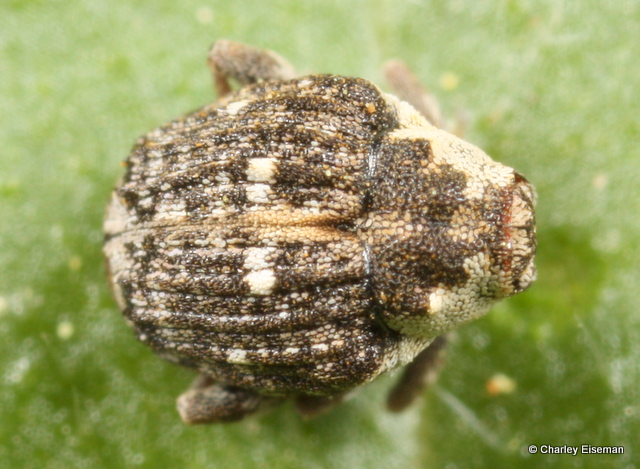 D. zimmermanni is associated with various plants in the evening primrose family, and the one in the photos above was actually on prairie sundrops (Oenothera pilosella) in the garden.  The pair below were in fact munching holes in enchanter’s nightshade leaves. 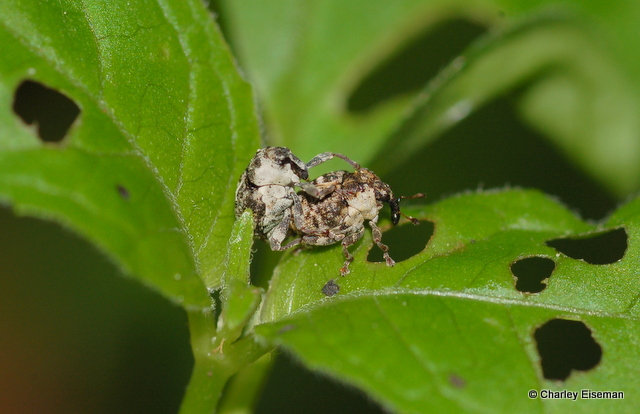 I am a freelance naturalist, endlessly fascinated by the interconnections of all the living and nonliving things around me. I am the lead author of Tracks & Sign of Insects and Other Invertebrates (Stackpole Books, 2010), and continue to collect photographs and information on this subject. These days I am especially drawn to galls, leaf mines, and other plant-insect interactions.
View all posts by Charley Eiseman →
This entry was posted in Uncategorized and tagged beetle, Braconidae, Ceutorhynchinae, Cicadellidae, Circaea, Circaea alpina, Circaea canadensis, Curculionidae, Curculionoidea, Dietzella zimmermanni, enchanter's nightshade, Erasmoneura atra, Erythroneura atra, flower, leaf mine, leafhopper, Microgastrinae, Mompha, Mompha terminella, moth, Oenothera, Oenothera pilosella, Onagraceae, parasitism, parasitoid, wasp, weevil. Bookmark the permalink.