After my “In Search of Snow Bugs” post a few days ago, Lang Elliott asked if I had any great pictures of snow fleas. I checked my files, and I found that my last attempt to photograph snow fleas on snow was the week I got my Canon macro lens, five years ago (I do have several shots of them on other substrates, like the group I found under bark this past December).  Those pictures are decidedly not great. Snow fleas on snow are about the most difficult things to photograph, because in addition to their being only about 1.5 mm long and jumping out of sight as soon as I find them in the viewfinder, photographing a dark object on a bright white background inevitably results in an underexposed subject or an overexposed background. Plus, with the blindingly bright snow on a sunny day, I can never be sure how the pictures are coming out when I review them on the LCD. But, since it was so nice out the other day, I decided to kneel in the snow for an hour and a half in a group of snow fleas and see what I could come up with. The results are still not exactly great, but possibly the best that can be done with this combination of camera, lens, subject, and photographer. Possibly if I had a better photo editing program I could create the illusion that I had taken great photos. Anyway, here are some of my favorites, out of the 300 or so I had to choose from. 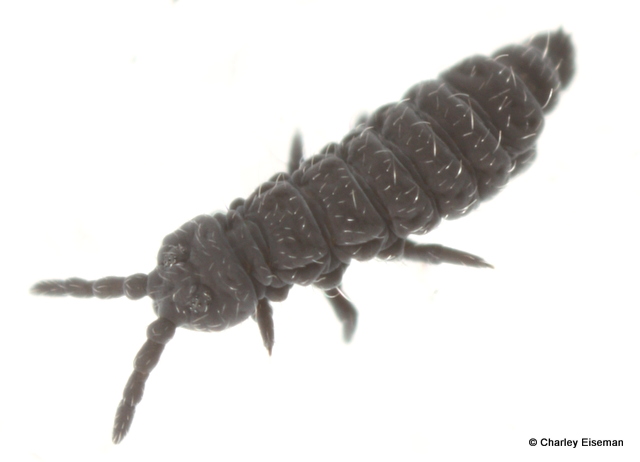 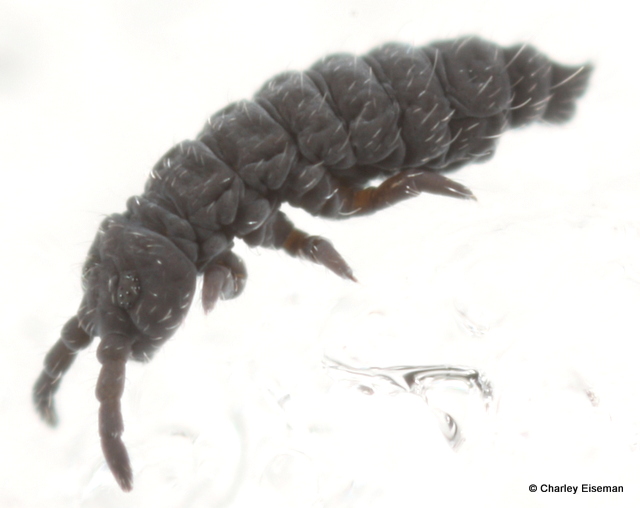 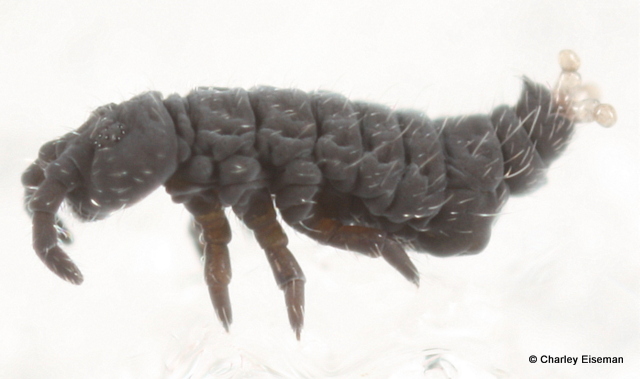 In the photo above, you may recognize yesterday’s mystery object:

It turns out that when a snow flea is getting ready to jump, it everts these three sticky vesicles from its anus, which help keep it from bouncing around when it lands. Another interesting feature in the above shot is the pair of dorsal spines. Their relatively large size indicates that this not Hypogastrura nivicola, the common species that snow fleas are usually assumed to be. It is probably H. harveyi, but I still need to run these photos by Frans Janssens to verify that. In addition to the size of the anal spines, snow flea identification requires examining the number and arrangement of setae (hairs) in various places, e.g. above the eyes and on the fourth abdominal segment. These photos, while certainly not National Geographic quality, should suffice for that purpose. 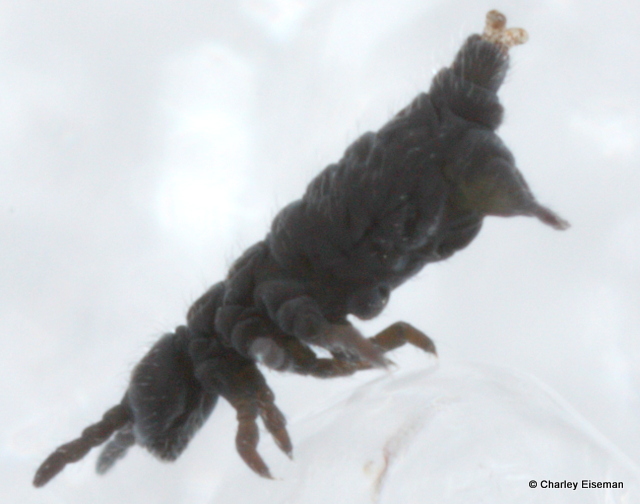 When I was just about done with my hour and a half of kneeling in the snow, I suddenly realized that the “baby snow fleas” I had been ignoring were actually a totally unrelated kind of springtail:

As you can see, they came in a variety of colors, and I’m not certain they’re all the same kind, but it seems possible that they are. A quick look through BugGuide suggests the genus Proisotoma (Isotomidae), which belongs to a different order from snow fleas. I’ll update this post when I learn more. These were all around 1 mm long, or two-thirds the size of a snow flea.

I am a freelance naturalist, endlessly fascinated by the interconnections of all the living and nonliving things around me. I am the lead author of Tracks & Sign of Insects and Other Invertebrates (Stackpole Books, 2010), and continue to collect photographs and information on this subject. These days I am especially drawn to galls, leaf mines, and other plant-insect interactions.
View all posts by Charley Eiseman →
This entry was posted in Uncategorized and tagged Collembola, Desoria, Hypogastrura, Hypogastrura harveyi, Hypogastrura nivicola, Hypogastruridae, Isotomidae, Proisotoma, snow flea, springtail, Vertagopus, Vertagopus pseudocinereus. Bookmark the permalink.