You may recall that back in September, I wrote about some mysterious squiggles radiating from the bases of bunchberry leaves:

I rambled on about how I thought they must be caused by a species of Antispila (Heliozelidae), but not A. freemani, the species that is known to mine bunchberry leaves. I ended with these two photos taken the day after I collected the leaves, backlit to reveal the tiny larvae inside:

…and after another three days, the initial linear portions were becoming dwarfed by the blotches:

If I’d had any lingering doubts about these being Antispila larvae, they were dispelled within two weeks, as all the larvae finished mining and cut out their characteristic oval pupal cases.

Each case had a distinct longitudinal ridge and several “spokes” projecting from the ends:

Into the fridge they all went in December, and out they all came in March. Today, the first moth emerged, leaving its pupal skin protruding from the leaf cut-out: 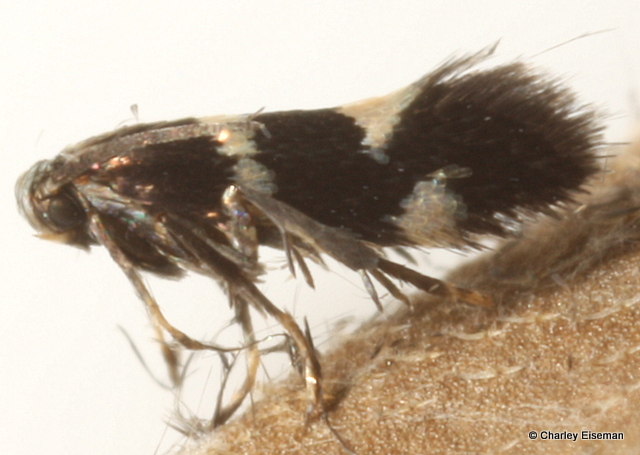 It’s pretty similar to the moths I’ve reared from the “normal” bunchberry mines, but substantially smaller (~2.3 mm from head to wingtip, versus 3.2-3.5 mm for the others). I’ll have to get somebody to look at the genitalia in order to reach a definite conclusion, but I think it’s clear that there are two Antispila species mining bunchberry.

In reviewing Lafontaine’s (1973) revision of the dogwood-feeding Antispila species*, I see that A. cornifoliella is much smaller than A. freemani, and I suspect that rather than having found a new species, I have found that the hosts of these two moths do not break down as nicely as Lafontaine claimed. He stated that the food plants of A. freemani are “northern species of the genus Cornus typical of damp situations”–bunchberry (C. canadensis), silky dogwood (C. amomum/obliqua), and red osier dogwood (C. stolonifera)–whereas A. cornifoliella feeds on “southern, upland species of Cornus,” e.g. flowering dogwood (C. florida) and alternate dogwood (C. alternifolia). Neither he nor any other author that I know of has described the mines of either species beyond saying that they are blotches.

Well, it’ll all get sorted out eventually, I guess.  Or not.

I am a freelance naturalist, endlessly fascinated by the interconnections of all the living and nonliving things around me. I am the lead author of Tracks & Sign of Insects and Other Invertebrates (Stackpole Books, 2010), and continue to collect photographs and information on this subject. These days I am especially drawn to galls, leaf mines, and other plant-insect interactions.
View all posts by Charley Eiseman →
This entry was posted in Solved Mysteries, Unsolved Mysteries and tagged Antispila, bunchberry, Cornus, Cornus canadensis, dogwood, larva, leaf mine, Lepidoptera, moth. Bookmark the permalink.