In S.W. Frost’s excellent 1959 book, Insect Life and Insect Natural History, there is a drawing of a clover leaf with a radially symmetrical pattern that gives the impression of a bite having been taken out of each side of each of the three leaflets. It is said to have been caused by a weevil feeding on the leaf before it opened (the weevil is said to be Hypera punctata, which apparently is now Donus zoilus, the clover leaf weevil). Here is an example I found with the opposite pattern, caused by damage to the tips rather than the edges of the still folded-together leaflets:

Last fall, I found a beech leaf with a more elaborate pattern, apparently caused by a single hole in the bud, producing an effect like a paper snowflake: 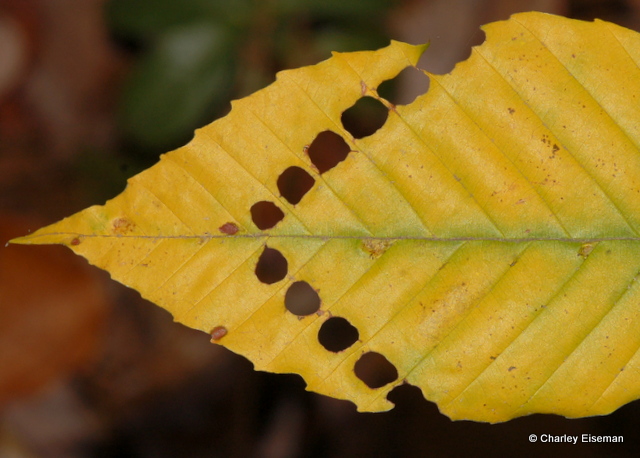 I thought that was pretty impressive until the other day, when John Maxwell brought to my attention this photo of a banana leaf, taken by Keara Giannotti in the Monteverde Cloud Forest Reserve in Costa Rica:

Keara says this was the third leaf she found with a similar pattern. She found this web page that attributes similar holes in a banana leaf to the caterpillar of an owlet moth (Noctuidae), Spodoptera litura. I find it fascinating that the holes line up perfectly in perpendicular rows and columns, which (unlike the holes in my beech leaf) have nothing to do with the leaf venation. Curiously, in the upper left there is a set of additional, alternating holes on one side of the midrib, and at the very top left (again just to one side of the midrib) there is an extra row of holes that is slightly offset.

So, beyond the question of what insect is responsible, I wonder how many separate “chomps” this pattern represents? Maybe someone with access to unfolding banana leaves will experiment with poking some holes and report back to us?

I am a freelance naturalist, endlessly fascinated by the interconnections of all the living and nonliving things around me. I am the lead author of Tracks & Sign of Insects and Other Invertebrates (Stackpole Books, 2010), and continue to collect photographs and information on this subject. These days I am especially drawn to galls, leaf mines, and other plant-insect interactions.
View all posts by Charley Eiseman →
This entry was posted in Uncategorized, Unsolved Mysteries. Bookmark the permalink.