A Complete Guide to Things That Eat Sea Lavender

Before I get started here, I wanted to point a few things out:

1. If you have an email subscription to this blog, I highly recommend clicking on the title rather than just reading the version that shows up in your email. This is because I have a habit of continuing to make little changes and additions after a post is published. (This habit isn’t limited to BugTracks; I can’t seem to stop working on Tracks & Sign of Insects either, even though it was published over five years ago.) For instance, when I woke up the morning after writing my last post, I tacked on another possible explanation at the end. I had gone back and forth about whether I should mention it, but everyone who has commented has agreed with this last hypothesis.

2. It has recently come to my attention that at least one ad-blocking program hides the email subscription box that should appear in the right sidebar, so if you haven’t been able to figure out how to subscribe, just disable your ad-blocking software and you should see a place to enter your email address and a “Sign me up!” button right above the “Make a Donation” button. I pay an annual fee so that you don’t have to see annoying ads on my website, so there is no need to use an ad blocker here.

So anyway, you may recall that a year and a half ago, I wrote about some mysterious mines in sea lavender leaves, which I’d found along the Maine coast and on Nantucket. Here’s one example:

I had first noticed the mines in June 2012 on tiny (2-acre) Battle Island, on which I was conducting a natural resource inventory for the Maine Coast Heritage Trust. The island is connected to the mainland at low tide, so I had decided to walk on in the morning and maroon myself there until the tide went back out in the evening. After two hours, I had thoroughly documented every plant and vertebrate on the island, so I was free to play with my macro lens and look for leaf mines for the rest of the day.

In 2013 I found more empty sea lavender mines on Nantucket, and then last June, while working on Ram Island in Castine, Maine, I finally found some that looked like they must be fresh, though I couldn’t see the larvae inside them:

I’m sure I wouldn’t have noticed these little white wispy lines in the leaves if I hadn’t been obsessing about these mines for the past two years.

By the end of June, the larvae were clearly visible in their mines. 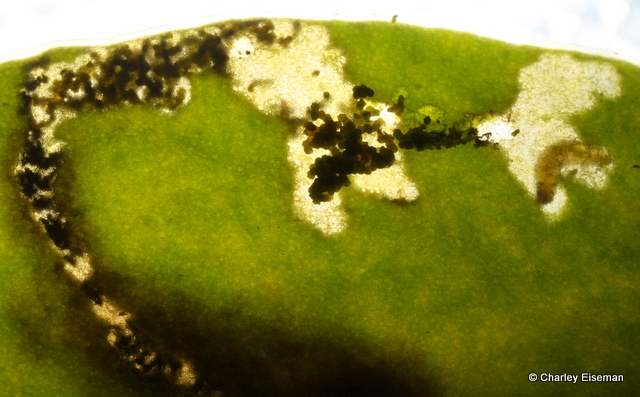 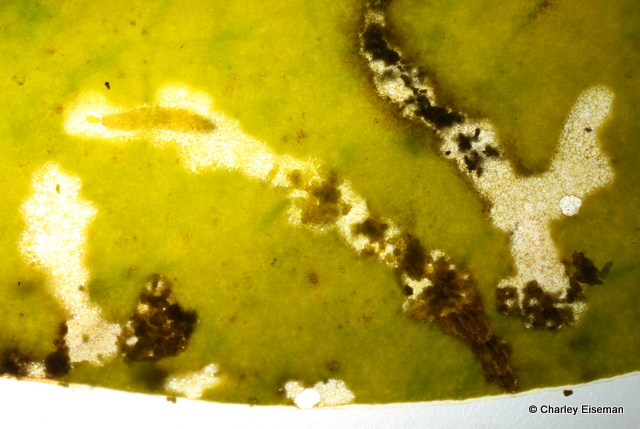 The leaves were starting to get moldy and deteriorate, but Kelly Omand of the Nantucket Conservation Foundation saved the day by FedExing me some fresh leaves, which I kept in the fridge, allowing me to refresh the rearing vials as needed. Over the next two weeks, the larvae exhibited a variety of behaviors, including leaf mining, petiole and midrib boring, leaf tying, and feeding on the leaf surface beneath a web. By mid-July, some were full-grown. 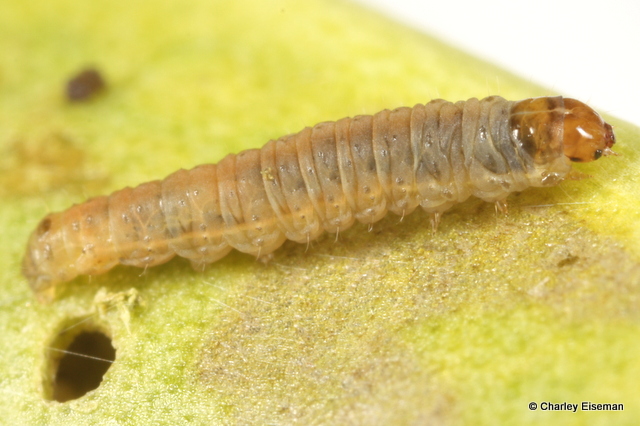 I had stuffed a crumpled-up piece of toilet paper into the bottom of each rearing vial to absorb excess moisture from the decomposing leaves. The mature larvae burrowed into the paper to pupate, beginning in mid-July. 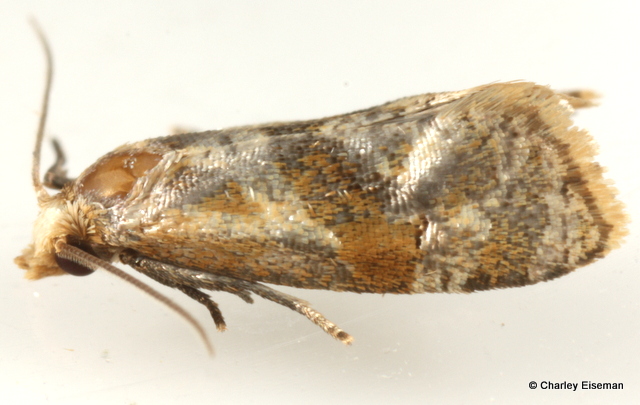 I knew it was a tortricid moth, but that was all I knew. I sent it to John Brown at the Smithsonian, along with the buckeye petiole borer, and he identified it as Gynnidomorpha romonana. This is the first larval host record for this moth, which is the only member of its genus in North America. Sea lavender must not be the only host plant, though, because G. romonana occurs as far west as Manitoba and Illinois, where there certainly isn’t any sea lavender.

It turns out that no insects have previously been documented feeding on sea lavender in North America (apart from flower visitors). But on that day in June 2012 that I took inventory of every bug on every plant on Battle Island, I found some aphids sucking on the sea lavender stems. When I returned in August, they were on the leaves as well.

These photos document the first time I’ve watched an aphid giving birth, but they also document something more significant: the first record of the aphid genus Staticobium in North America. Fortunately, over the summer I had corresponded with aphid taxonomist Andy Jensen about these, and I knew they were something interesting before I returned in August. So I collected some for him to examine. Unfortunately, the genus is a mess, and he was unable to determine whether they represent a new species or one that occurs in Europe. I do not think they represent a recent introduction; it just seems like no entomologists have paid attention to sea lavender before. I have since found more of these aphids elsewhere on the Maine Coast and on Nantucket, and some were collected in Nova Scotia last summer.

For more details about all this, see:

I am a freelance naturalist, endlessly fascinated by the interconnections of all the living and nonliving things around me. I am the lead author of Tracks & Sign of Insects and Other Invertebrates (Stackpole Books, 2010), and continue to collect photographs and information on this subject. These days I am especially drawn to galls, leaf mines, and other plant-insect interactions.
View all posts by Charley Eiseman →
This entry was posted in Solved Mysteries and tagged aphid, Gynnidomorpha romonana, larva, leaf mine, Limonium, Limonium carolinianum, moth, sea lavender, Staticobium, Tortricidae. Bookmark the permalink.