Two years ago I posted this photo of a sawfly larva feeding on a black cherry (Prunus serotina) leaf on Nantucket. I suspected it was Sterictiphora prunivora (Argidae), based on Harrison G. Dyar’s (1897 ) description of that species eating a “curious winding slit down into the leaf.” I collected the larva to try and raise it, to confirm this suspicion.

These larvae have been active for the past week or two here in western Massachusetts, so I figure it’s time to report on my findings. But first, here are a few examples I’ve found this month (beginning on May 18): 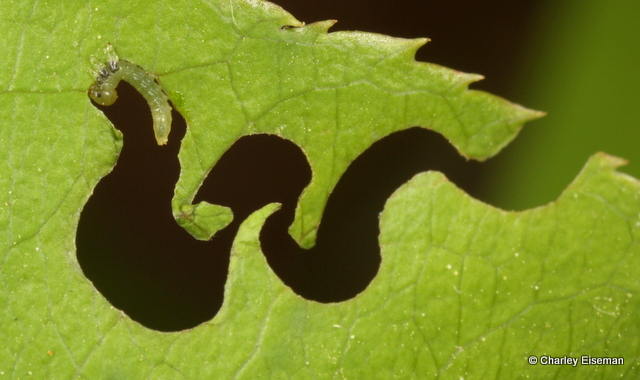 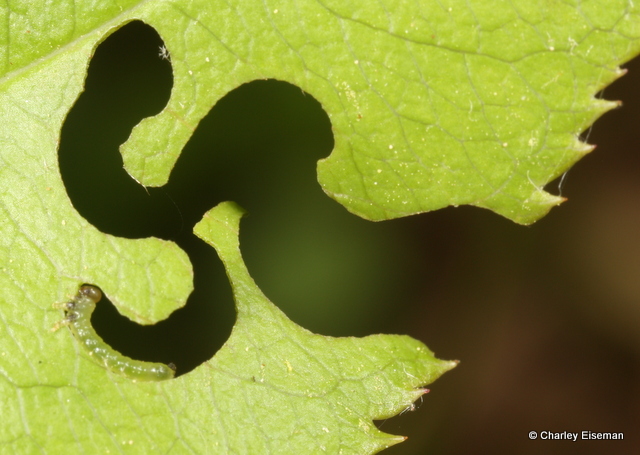 So back to the Nantucket larva from two years ago. As it grew, it abandoned its distinctive feeding style and became a regular old leaf edge feeder. This picture was taken one week after I collected it:

Four days later, it spun a fuzzy brown cocoon in the bottom of the vial: 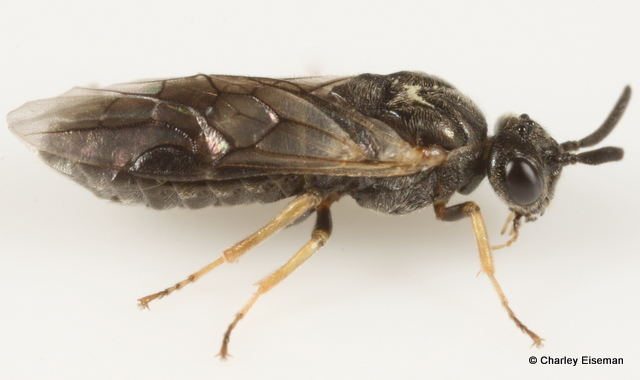 Dave Smith determined it to be Sterictiphora serotina, a species he had first described in 1969. As evidenced by its name, it was known to feed on Prunus serotina, but the details of its life history had not been recorded. Possibly these “curious winding slits” are made by all species of the genus Sterictiphora, of which there are six in North America and about forty worldwide. Another member of the subfamily Sterictiphorinae, Aproceros leucopoda,  feeds in a similar pattern on elm leaves. It is native to Asia but has recently spread throughout Europe, where it has become known as the “zigzag elm sawfly.”

Dave also sent me a scan of a page from Dyar’s notebook, on which Dyar had sketched the original “curious winding slit.” I included this sketch in a note that was recently published*–actually it was published the day after the paper describing Scolioneura vaccinii, along with another paper Dave and I coauthored on the violet leafmining sawfly. It was a good week for sawflies.

If you would like a PDF of one of these, or any other of my journal articles that are not open access, just send me an email.

I am a freelance naturalist, endlessly fascinated by the interconnections of all the living and nonliving things around me. I am the lead author of Tracks & Sign of Insects and Other Invertebrates (Stackpole Books, 2010), and continue to collect photographs and information on this subject. These days I am especially drawn to galls, leaf mines, and other plant-insect interactions.
View all posts by Charley Eiseman →
This entry was posted in Uncategorized and tagged Argidae, black cherry, cherry, cocoon, Hymenoptera, larva, Nantucket, Prunus, Prunus serotina, Rosaceae, sawfly, Sterictiphora, Sterictiphora serotina. Bookmark the permalink.