Posted on September 30, 2015 by Charley Eiseman

Twice before, I’ve posted photos of agromyzid flies freshly emerged from their puparia (hardened larval skins in which they pupate), with their faces grotesquely inflated. You may recall that since adult flies have no chewing mouthparts, they emerge from their puparia by inflating an airbag-like structure, called the ptilinum, to pop them open.

In 2011, the photos were of the gallmaker Hexomyza schineri, which is now Euhexomyza schineri thanks to a recent paper* by Owen Lonsdale (which happens to feature two of my photos from that post). In 2013, they were of a leafminer on bush honeysuckle (Diervilla lonicera) whose identity is still uncertain—Owen examined my specimens and said they resembled Phytomyza linnaeae, a western species that mines leaves of twinflower (Linnaea borealis), but I will be surprised if they really turn out to be the same species, since the two have very different larval habits.

Last month, I got another opportunity to photograph this bizarre phenomenon. Once again, the fly is a leaf-mining Phytomyza species whose identity is uncertain. I found the mines on sweet cicely (Apiaceae: Osmorhiza) in Iowa:

Just two North American leafminers are known from Osmorhiza: the western Phytomyza lanati and the eastern P. osmorhizae. Both species are said to have black puparia, but the larvae that emerged from these mines all formed brown puparia: 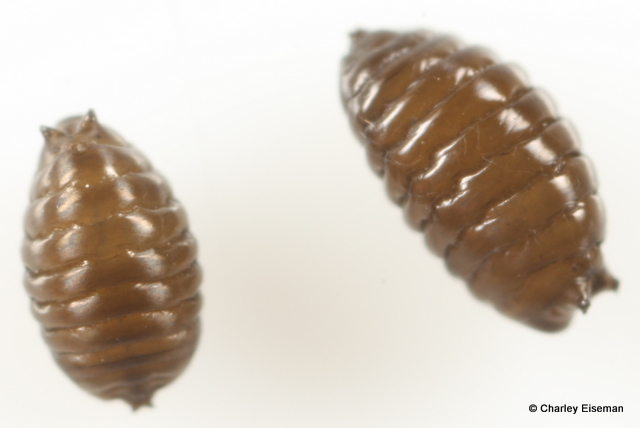 When the first adult flies started emerging, I put the rearing vial in the fridge so I could slow them down and get photos. After I had finished photographing the adults, I glanced over at the vial and saw a little balloon-head just starting to pop out of one of the remaining puparia. With a camera already in hand, I managed to get this series over the next two minutes (along with about 50 other intermediate shots): 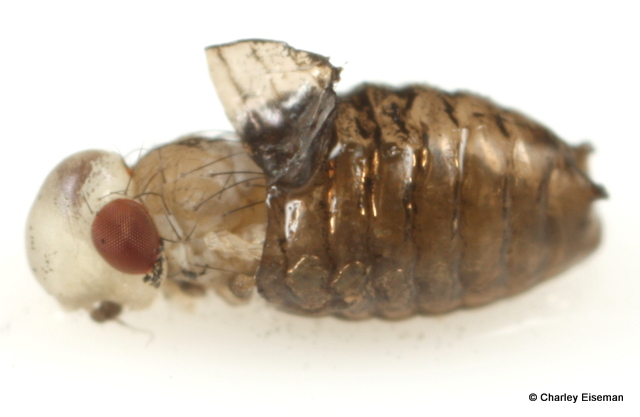 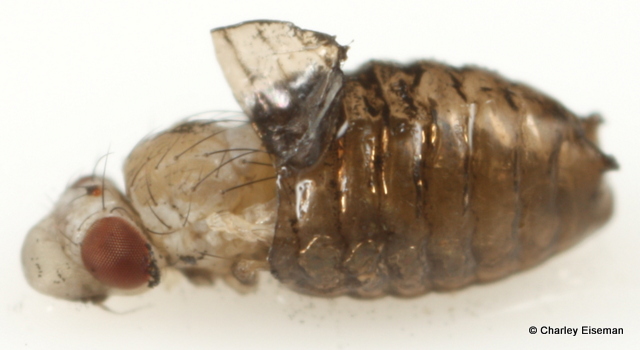 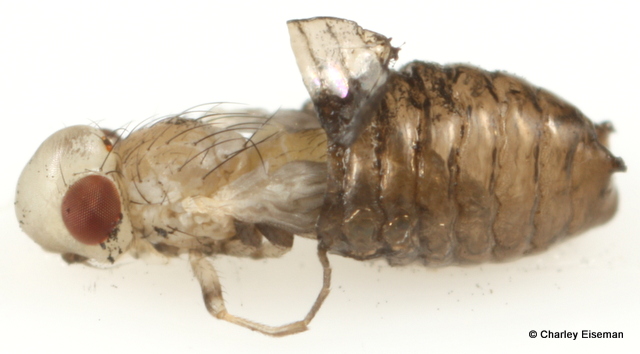 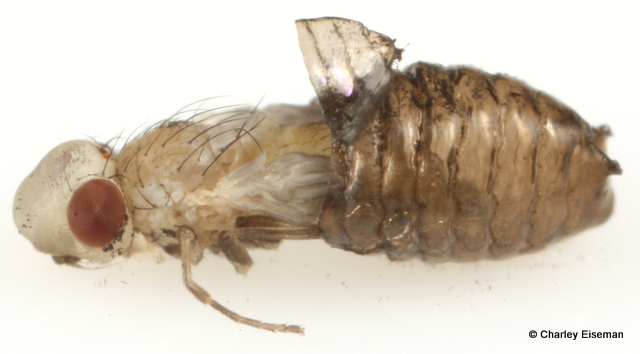 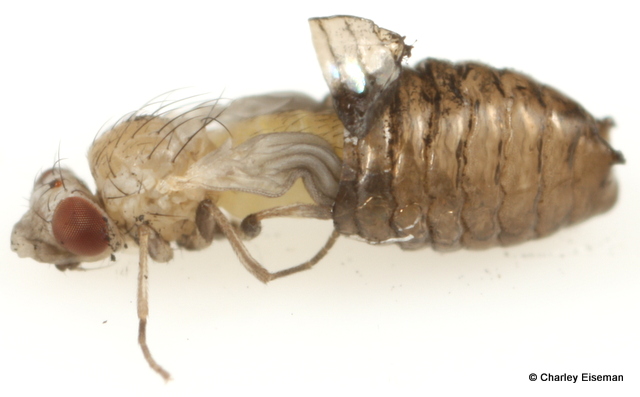 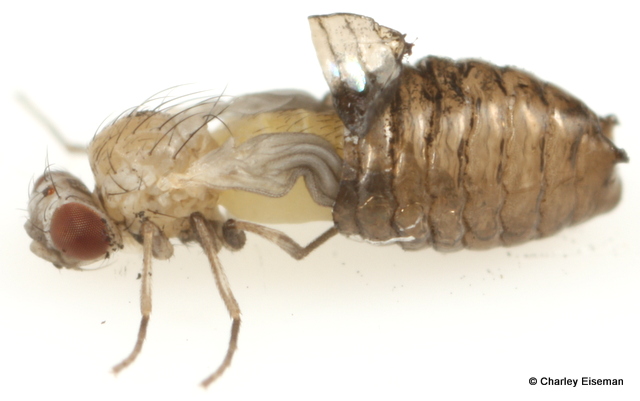 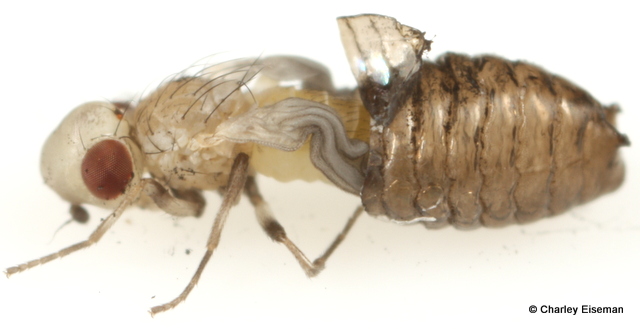 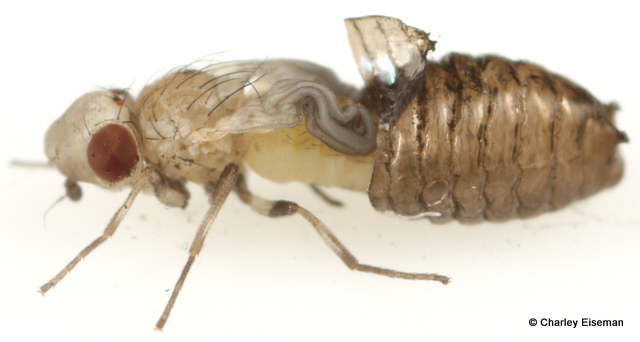 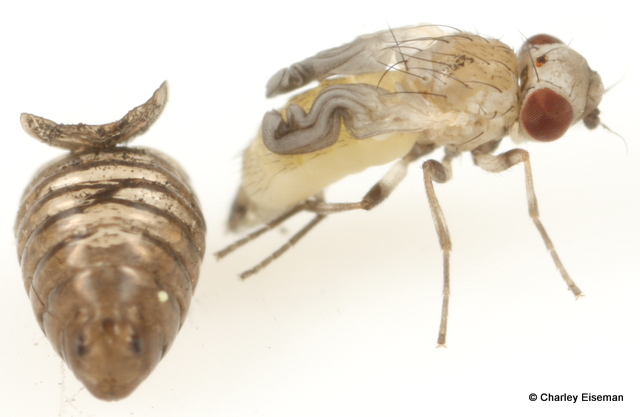 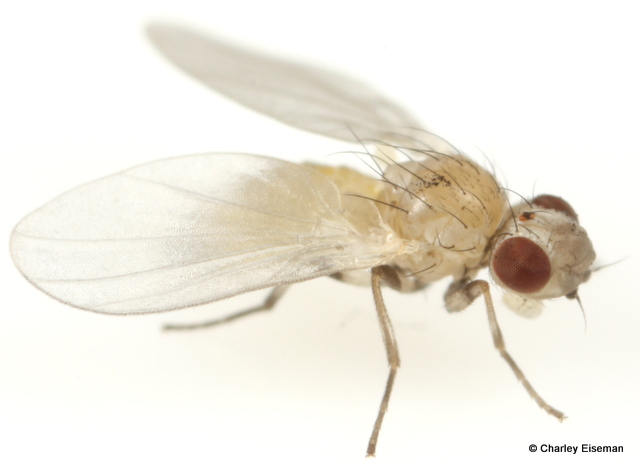 The fully darkened adult flies looked like this (this one is a different individual): 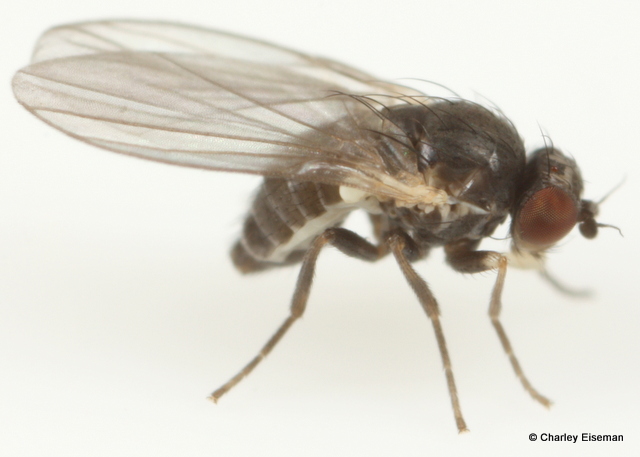 The next day, I spotted another fly just beginning to emerge in the same vial. This time I ran to get Julia’s camera, and for the first time I tried out combining its video function with my macro lens. Julia edited the video down, and you can see the result below. I had the lens resting on the edge of the dinner plate the fly was on, but even so the video is a little wiggly. Because the depth of field with this lens is less than a millimeter, the fly drifts in and out of focus. At the end, we left in several blurry seconds of me chasing the fly around the plate with the lens, so that you can appreciate how difficult it is to get a moving insect in focus with the MP-E 65mm and marvel at the fact that I ever succeed in doing so. Enjoy!

* Lonsdale, Owen. 2014. Redefinition and synonymy of genera in the Ophiomyia genus group, with the description of Euhexomyza new genus (Diptera: Agromyzidae). Canadian Entomologist 146: 481-513.

I am a freelance naturalist, endlessly fascinated by the interconnections of all the living and nonliving things around me. I am the lead author of Tracks & Sign of Insects and Other Invertebrates (Stackpole Books, 2010), and continue to collect photographs and information on this subject. These days I am especially drawn to galls, leaf mines, and other plant-insect interactions.
View all posts by Charley Eiseman →
This entry was posted in Uncategorized and tagged Agromyzidae, Apiaceae, Diptera, fly, Iowa, leaf mine, Osmorhiza, Phytomyza, ptilinum, pupa, sweet cicely. Bookmark the permalink.