(Note: For those who have already read yesterday’s post, I’ve added a little more information at the end after hearing back today from Jerry Powell, who described the genus Areniscythris in 1976.)

Last January I wrote about the “green islands” that form around some galls and leaf mines when the rest of the leaf is senescing in the fall. At the end I linked to a post by Seabrooke Leckie about Ectoedemia argyropeza (Nepticulidae), an introduced moth that is now extremely common on quaking aspen (Populus tremuloides) in eastern Canada and, according to Erik van Nieukerken’s comment here, the northeastern US (I can find no published or online records of this species in the United States). Last October, I found lots of these mines in fallen leaves just down the road from my house in western Massachusetts, and I filled a sandwich box with them so I could try and raise some and get photos of adults.

You can see that the brown blotch mines, formed between the midrib and another major vein at the base of the leaf, are much smaller than the resulting green islands.

Well, I kept the box in an unheated shed all winter, and on April 16 three little nepticulids emerged. After I photographed them, Julia managed to pin them (an impressive feat, given that the moths are about 2 mm long). Last month, we met up with Erik van Nieukerken for a weekend of leafminer hunting in Vermont, and I gave him most of the nepticulids I’d reared so he could examine them when he got back to the Netherlands. However, I didn’t bother giving him any of these aspen moths, figuring he’d seen plenty of them already.

Since then, I’ve gotten around to starting to sort through my photos from this spring. When I got to these moths, I realized they look nothing like Ectoedemia argyropeza. In fact, I wasn’t sure they even belonged to that genus. 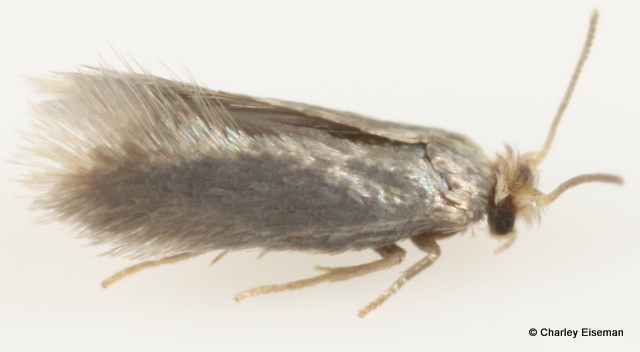 Sure enough, when I sent Erik the above photo, he said it was clearly a Stigmella based on the lamellate scales in the collar, but he had no idea what species. DNA barcodes of larvae indicate that there are several more poplar-mining Stigmella species than are known from adults, so with any luck these moths will turn out to match one of these unknown larvae. I didn’t notice any other mines on the aspen leaves I collected, and no actual Ectoedemia adults ever emerged, so at this point I’m guessing that some, if not all, of these “green island” mines were actually made by this Stigmella species. I do see some differences between the mines I photographed and those of E. argyropeza pictured on the excellent Leafminers and Plant Galls of Europe website. Whereas E. argyropeza deposits frass in two stripes along the sides of its mine, the frass in my one backlit photo is more centrally deposited.

It also may be significant that the green “island” is so much smaller in that example, barely extending beyond the mine itself. 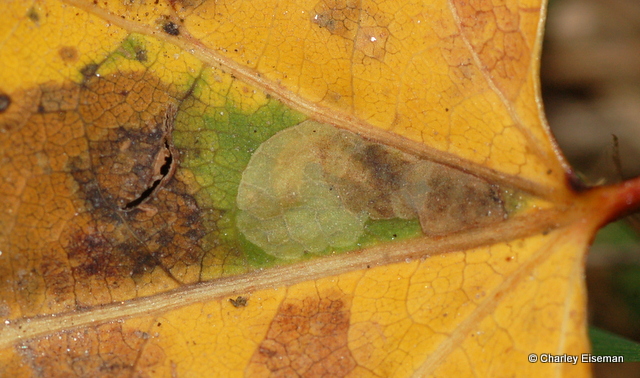 There is also the fact that E. argyropeza larvae are said to be mostly active at night, hiding in the petiole (where the mine originates) during the day. The larva in the photos above was feeding in broad daylight, and I can see no evidence that its mine begins in the petiole.

Although most Stigmella species make long, linear mines, the larva in this rather similar little mine I found on a willow (Salix pentandra) leaf in South Dakota turned out to be a Stigmella.

That is, Erik got a DNA barcode from the larva and it clearly fell within the genus Stigmella, but didn’t match any known species. Its closest relative seems to be another unidentified species Erik collected from willow in England. Since willow and aspen are in the same family (Salicaceae), it could be that my local aspen miner is related to the South Dakota willow miner. We shall see… needless to say, I will soon be taking another trip down the road to look for more of these mines, and will look at them more closely this time.

If you are interested in reading more about this “green island” phenomenon, here is a new paper investigating it in Phyllonorycter (Gracillariidae) and a number of other leaf-mining moths.

I am a freelance naturalist, endlessly fascinated by the interconnections of all the living and nonliving things around me. I am the lead author of Tracks & Sign of Insects and Other Invertebrates (Stackpole Books, 2010), and continue to collect photographs and information on this subject. These days I am especially drawn to galls, leaf mines, and other plant-insect interactions.
View all posts by Charley Eiseman →
This entry was posted in Uncategorized and tagged aspen, Ectoedemia, Ectoedemia agryropeza, green island, larva, leaf mine, moth, Nepticulidae, new species, Populus, Populus tremuloides, quaking aspen, Salicaceae, Salix, Salix pentandra, Stigmella, willow. Bookmark the permalink.

6 Responses to Green Islands (Part 2), and Another Mystery Moth