When you use a technical botanical manual to identify a plant, you will often encounter vague references to “glands” or “glandular hairs” on various plant parts, without any indication of the functions of these structures. Four years ago I wrote about the glands on cherry petioles that are in fact extrafloral nectaries, producing nectar to lure predatory insects so that they might hang around and prey on herbivorous insects that show up to feed on the plant. But what about those glandular hairs, which do not produce nectar? I started to pay more attention to these when my friend Eric LoPresti told me he was compiling a list of sticky plants that trap small insects.

You are probably familiar with carnivorous plants such as sundews (Drosera spp.), which catch insects with their sticky hairs and devour them. 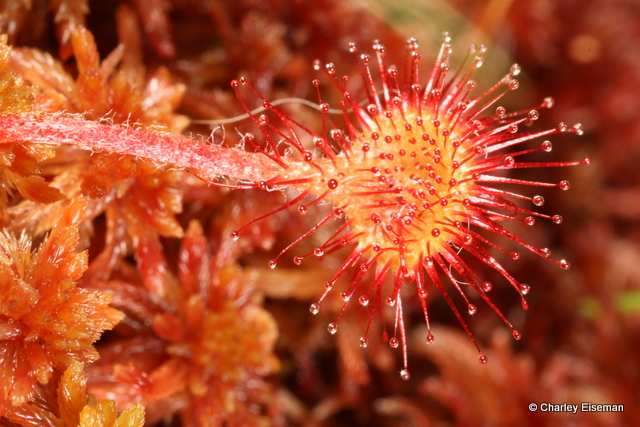 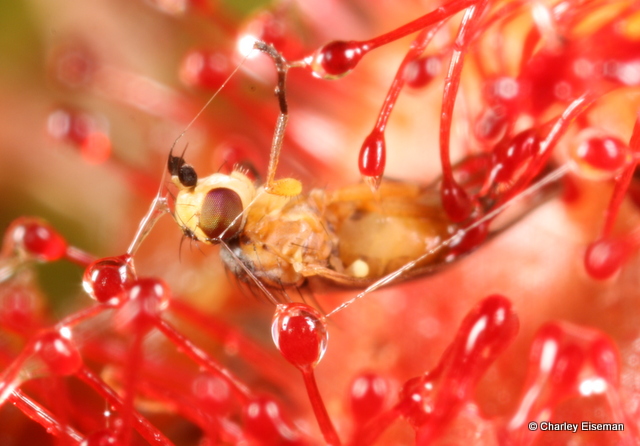 Cerodontha dorsalis (Agromyzidae), a fly whose larvae mine grass leaves, caught by the sticky hairs of a sundew leaf.

But that’s not what I’m talking about here. All sorts of non-carnivorous plants have sticky hairs that end up covered with dead insects, producing no obvious benefit for the plant.

This spring I was looking closely at mountain laurel (Kalmia latifolia) in search of overwintered case-bearing larvae of the moth Coleophora kalmiella. I was surprised to discover that while the mature leaves of this common shrub are smooth and leathery, the newly opening ones are very sticky and regularly accumulate dead, trapped insects. 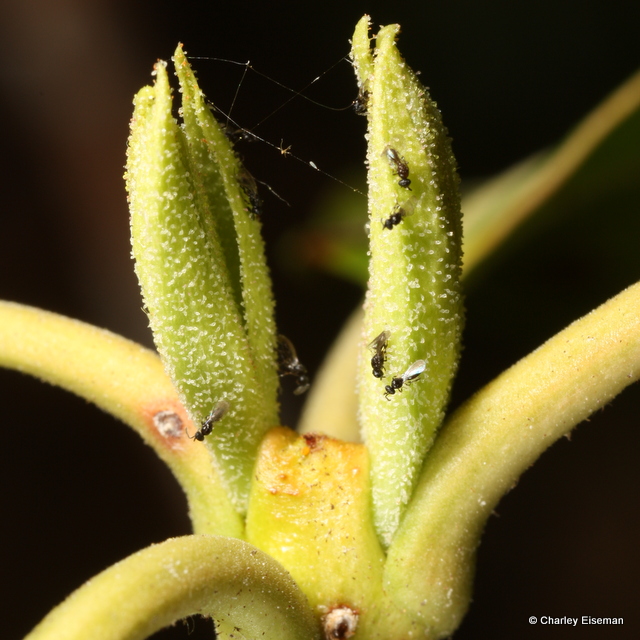 The unfortunate insects in the above photo are all platygastrid wasps, which are parasitoids of gall midges. A closer view of one of them (about 1 mm long): 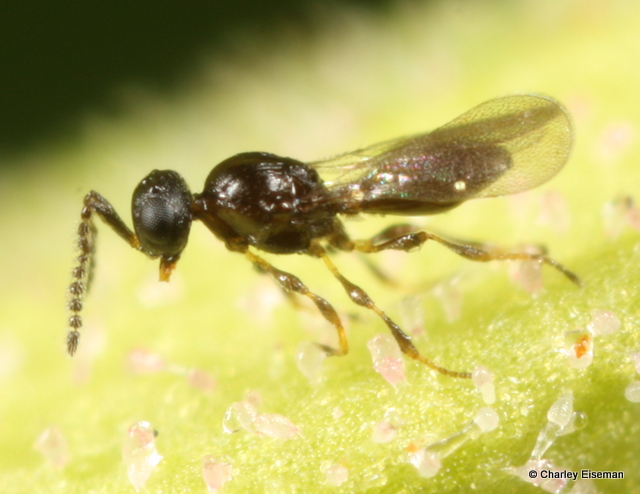 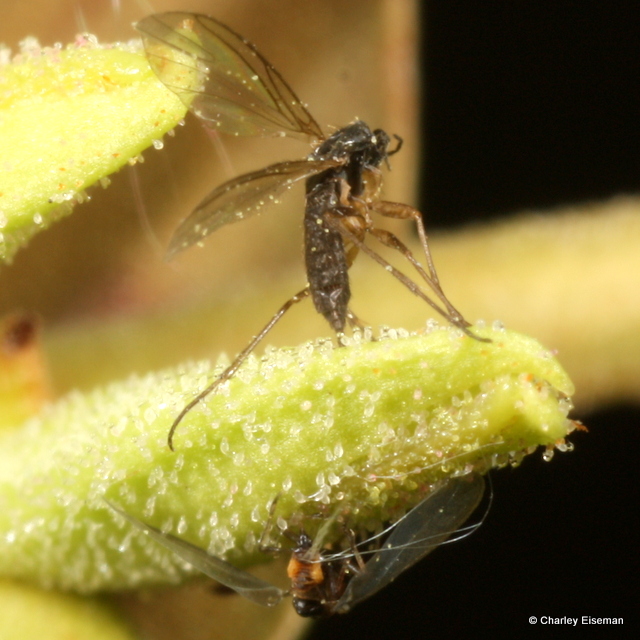 The insect on the underside of the bud in the above photo is something I’ve never seen before: an adult male scale insect. See the long, wispy wax filaments emanating from the tip of its abdomen? Here’s another view: 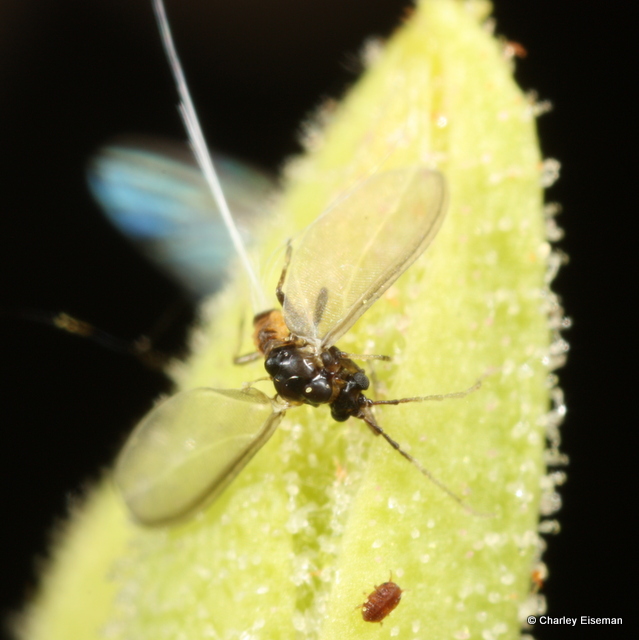 And see the little red bug at the bottom of the above photo? That’s a recently hatched scale insect nymph (“crawler”), only about 0.3 mm long.

I don’t remember now if that nymph was walking around freely or was likewise stuck to the bud. Anyway, another victim included this tiny midge (Chironomide: Orthocladiinae), about 1.4 mm long: 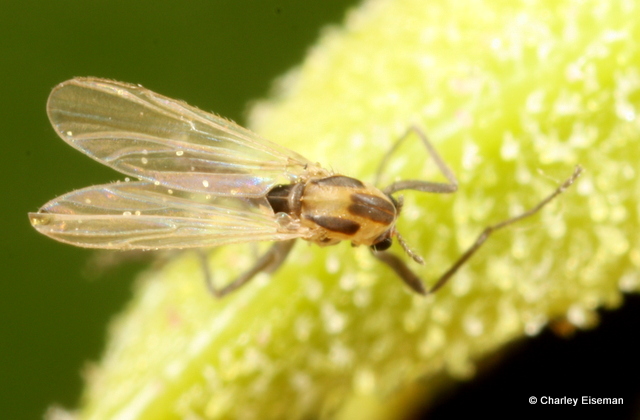 And here’s another dark-winged fungus gnat, this one surrounded by what seem to be psyllid nymphs [thanks to Matt Bertone for the suggestion; I had originally said phylloxerans]: 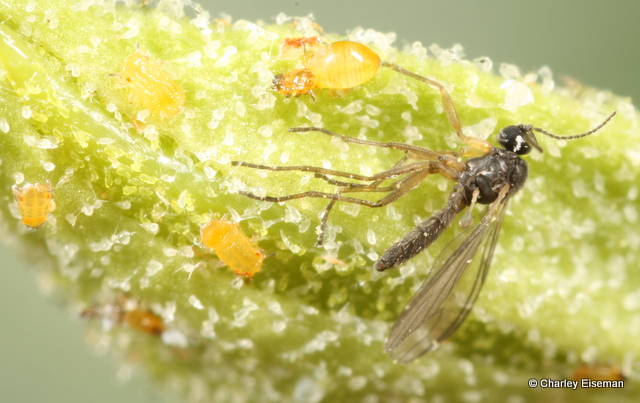 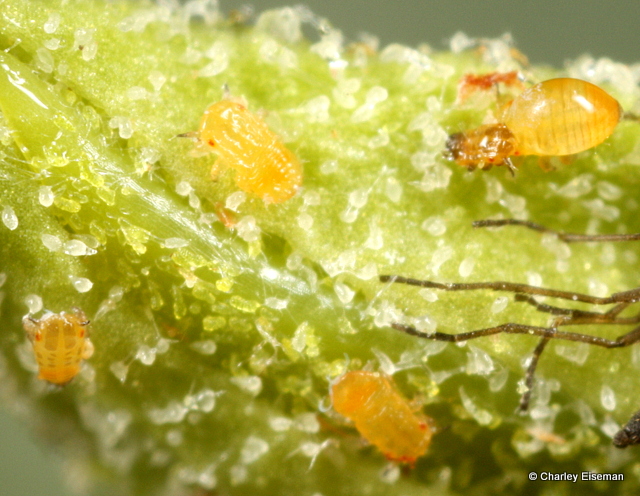 So what’s with all the bugs stuck to these buds? This turns out to be a similar scheme to the extrafloral nectaries, except that instead of luring predators with nectar, the plant is offering freshly killed insects. In a series of experiments, Eric and his colleagues showed that the sticky stems of a particular columbine species actively attract insects, that these stuck insects in turn attract predators, and that the presence of these predators reduces damage to the plant by herbivorous insects. Their findings are summarized in this Discover magazine blog post, Eric’s own blog, and a paper in the journal Ecology. The paper includes a table that lists over 110 plant genera, in 49 families, that have sticky insect-trapping surfaces.

I am a freelance naturalist, endlessly fascinated by the interconnections of all the living and nonliving things around me. I am the lead author of Tracks & Sign of Insects and Other Invertebrates (Stackpole Books, 2010), and continue to collect photographs and information on this subject. These days I am especially drawn to galls, leaf mines, and other plant-insect interactions.
View all posts by Charley Eiseman →
This entry was posted in Uncategorized and tagged Agromyzidae, Cerodontha, Cerodontha dorsalis, Chironomidae, Coccoidea, dark-winged fungus gnat, Diptera, Drosera, Ericaceae, fly, fungus gnat, Kalmia, Kalmia latifolia, midge, mountain laurel, Orthocladiinae, Phylloxeridae, Platygastridae, scale insect, Sciaridae, sticky plants, sundew, wasp. Bookmark the permalink.