Last week I got an email from a reader named Kelly in Brazil, asking if I could help unravel the mystery of these stink bug eggs (Pentatomidae) covered with silk: 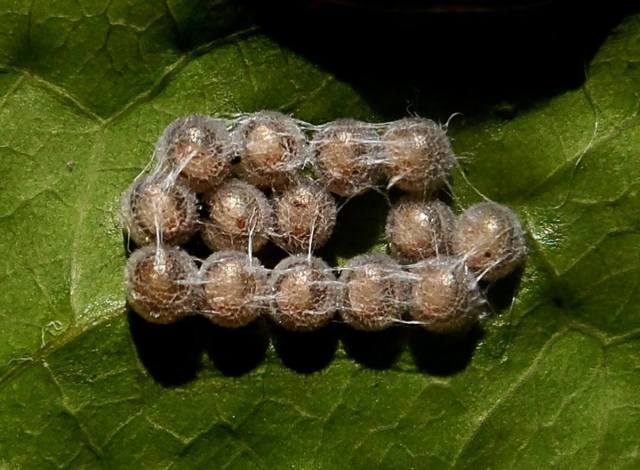 I was at a loss, and simply responded: “Interesting find… I’m not aware of any true bugs (Hemiptera) that produce silk, so I think the silk must have been put there by something else (a spider?).  As to why something would spin silk over pentatomid eggs, I couldn’t say!”

Three days later, I got a note from Cheryl Harleston, who wrote:

In my case, I am in Yelapa, state of Jalisco, in Mexico (subtropical forest), elevation approx 5 mt above sea level… On Nov. 2 I watched a stink bug (Edessa expolita) laying eggs on a fern. On November 4 I first noticed the tiny wasp parasitizing the eggs, which then covered them with some sort of silk over the course of several days. At first I thought there must be a spider nearby, but could not find any anywhere close, so I assumed it was the wasp… On November 10 a jumping spider (Theodina hespera) arrived and ravaged the whole thing.

She included these photos: 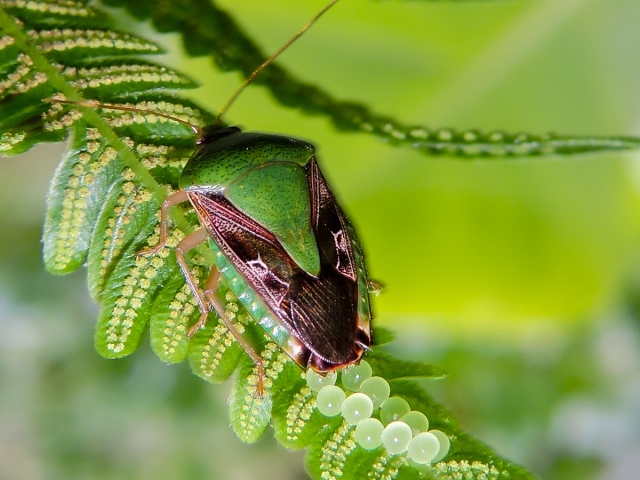 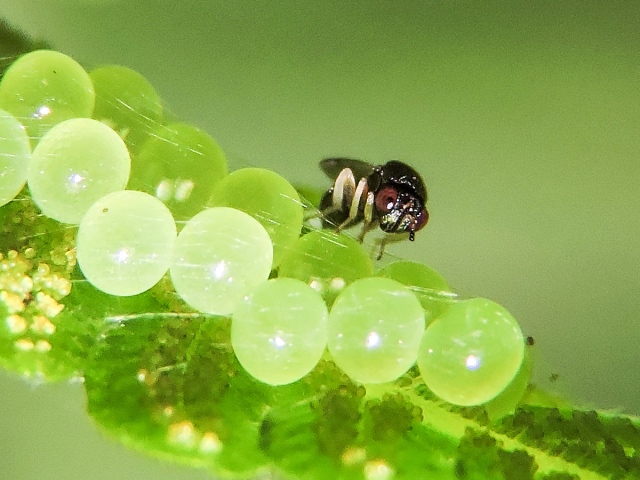 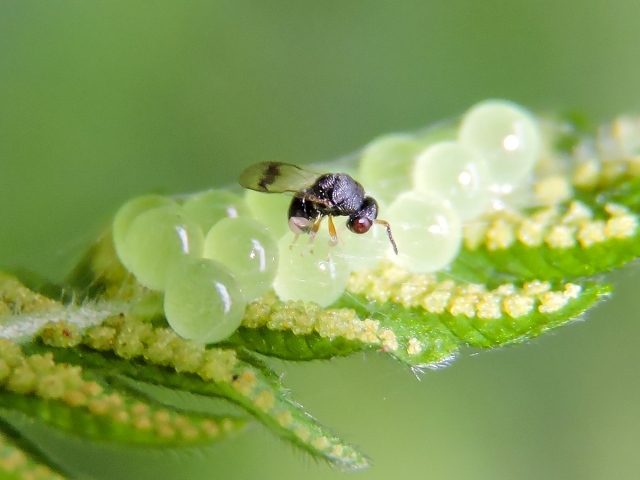 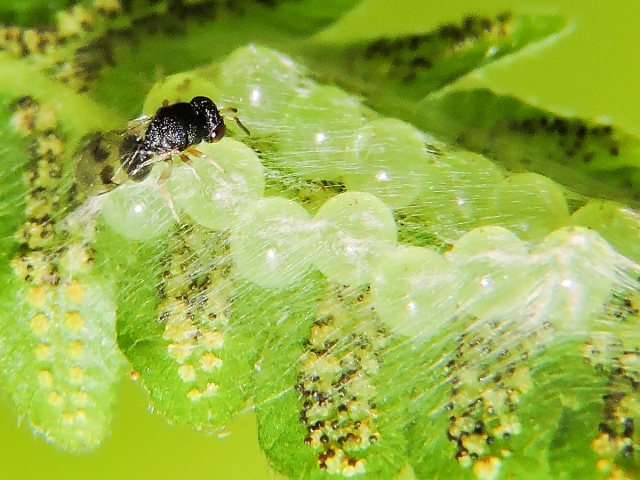 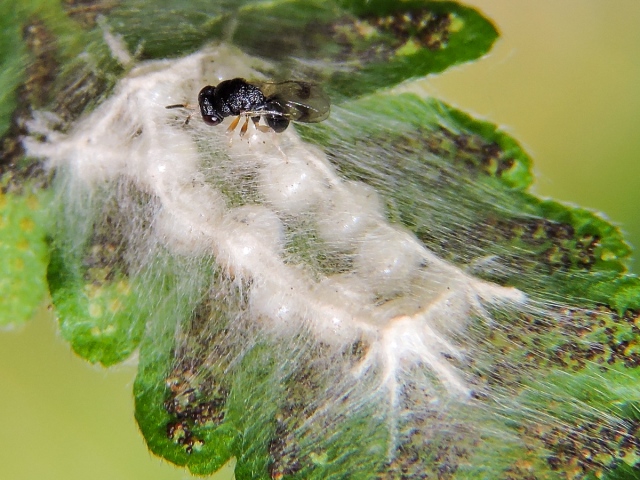 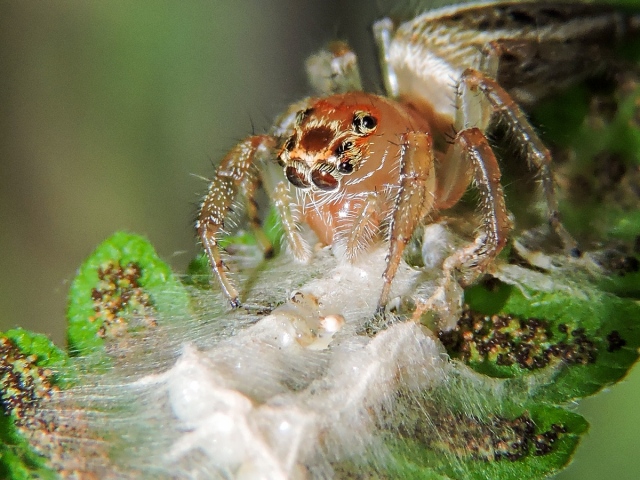 Well, I hadn’t heard of any adult wasps that spin silk either, so I wasn’t sure what to make of this. The wasp looked to me like some kind of chalcid, rather than a playgastrid, which is what I normally see hanging out on stink bug eggs. I shared some of these photos on the Hymenopterists’ Forum on Facebook to see if anyone recognized the wasp or knew of any examples of adult wasps producing silk, and several people quickly identified the wasp as a pteromalid (which is indeed a type of chalcid). No one commented on whether it could be responsible for the silk, but Rob Longair directed me to this paper, noting that adult Microstigmus, Spilomena, and others use silk in nest construction:

A quick Google image search for Microstigmus reveals that these tropical wasps produce hanging silk nests that I probably would have mistaken for spider egg sacs if I encountered them. Microstigmus and Spilomena are crabronid wasps, which have nothing to do with chalcids, but out of curiosity I obtained a scan of the paper, and I was glad I did. The introduction mentions several other adult wasps that produce silk, including two chalcids—so I tracked down the papers that were cited for these.

One of them* described something very similar to what this pteromalid was apparently doing. Signiphora coquilletti (Signiphoridae) is a hyperparasitoid, parasitizing aphelinid wasps that parasitize whitefly pupae. The females seek out parasitized whitefly pupae, insert their own eggs, and then spin webs over the pupae, not unlike the webbing in the above photos. The authors feel that the webbing most likely functions to protect the Signiphora’s offspring from further parasitism of the whitefly pupa—either by additional aphelinids or by other Signiphora females. Evidently that is the function of this pteromalid’s webbing on the stink bug eggs—and evidently it does little to protect her offspring from larger threats such as jumping spiders.

Apparently several species of eupelmids are the only other chalcids known to spin webbing as adults. Woolley and Vet note that “in these cases the webs appear to partially immobilize the host larvae, to protect the parasite eggs, and to keep the parasite eggs in the vicinity of the host larvae.” At least one of these eupelmids parasitizes gall insects, laying an egg on the inner wall of the gall near the host larva and then covering the egg with webbing—so this isn’t something you would ever see unless you were dissecting galls and examining them under a microscope.

And so it seems that Kelly and Cheryl have found something that hasn’t been documented before. If someone out there knows otherwise, please enlighten us! Below are two videos Cheryl got of the pteromalid before the spider came along.

I am a freelance naturalist, endlessly fascinated by the interconnections of all the living and nonliving things around me. I am the lead author of Tracks & Sign of Insects and Other Invertebrates (Stackpole Books, 2010), and continue to collect photographs and information on this subject. These days I am especially drawn to galls, leaf mines, and other plant-insect interactions.
View all posts by Charley Eiseman →
This entry was posted in Uncategorized and tagged Brazil, chalcid, Edessa, Edessa expolita, eggs, Hymenoptera, jumping spider, Mexico, parasitism, parasitoid, Pentatomidae, Pteromalidae, Salticidae, spider, stink bug, Theodina, Theodina hespera, wasp, web. Bookmark the permalink.