No, Not Leafcutter Bees

Here are a few examples of interrupted leafcutter bee cuts, along with completed cuts where the bee removed a circular or oblong piece from the leaf. 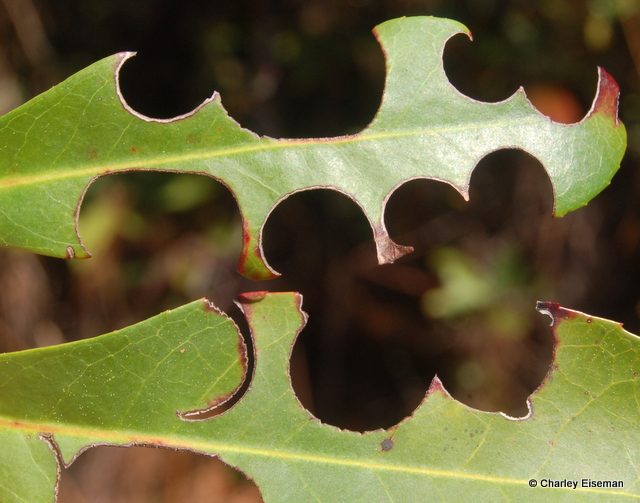 Notice how the pieces are cut all along the leaf margins, in no way focused on the midrib or the major veins. Also notice that the cutouts are made by cutting in one direction: none of the interrupted cuts shows any evidence of the bee starting an opposing cut, and the complete cuts never have a disjointed part in the middle where two cuts didn’t quite line up. In some cases the asymmetry of the cut makes it clear which way the bee was moving (for instance, clockwise in the one in the lower right corner of the second photo). Each of the following photos has another clear example of one of these lopsided, spiral cuts:

Now take another look at the leaf I found yesterday:

See how there are two counterclockwise cuts that start at the leaf margin and end at the midrib or a major vein? Each of these has a paired cut that was supposed to meet the first one from the other side. The one associated with the midrib is very short and easy to overlook. The other one made it all the way to the intended vein, but missed the first cut terribly; the insect tried to correct this, but missed again.

On a neighboring leaf of the same oak sapling, the insect got it right: 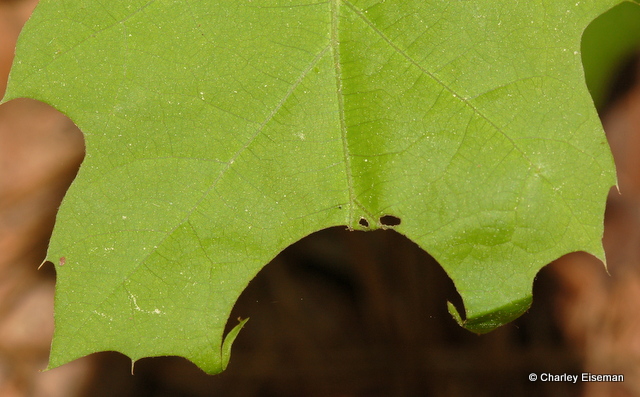 This one wasn’t so symmetrical, but it also worked out okay:

In this second example, it is especially obvious that the leaf cutout was left dangling from the major vein in the middle. What did the insect do while the cutout was dangling like this? Five years ago I posted photos of this insect putting the finishing touches on its creation. When I saw these cut oak leaves yesterday, I knew the finished products should be lying on the ground directly below, but none were in evidence. Apparently they rolled a little when they fell; I picked one dead leaf up off the ground and found this under it:

This little packet was 8 mm long. Congratulations to Laura Hughes for being the only person to recognize the work of a distracted leaf-rolling weevil.

I am a freelance naturalist, endlessly fascinated by the interconnections of all the living and nonliving things around me. I am the lead author of Tracks & Sign of Insects and Other Invertebrates (Stackpole Books, 2010), and continue to collect photographs and information on this subject. These days I am especially drawn to galls, leaf mines, and other plant-insect interactions.
View all posts by Charley Eiseman →
This entry was posted in Uncategorized and tagged Attelabidae, bee, Coleoptera, Curculionoidea, Hymenoptera, leaf-rolling weevil, leafcutter bee, Megachile, Megachilidae, weevil. Bookmark the permalink.

5 Responses to No, Not Leafcutter Bees