A month ago Dave Wagner got in touch with me and Julia, saying we were needed at the 2016 Connecticut State BioBlitz on June 3 and 4. He wanted to make sure leafminers were properly represented in this attempt to break the record for the most species ever recorded in a single 24-hour BioBlitz. The area to be surveyed was a five-mile radius around a school in East Hartford, an area that is mostly pavement but includes a few fragments of floodplain and upland forest. We took the challenge, and this past weekend we helped document a total of 2765 species, breaking the previous record of 2519 that was set in 2001. It was hard not to just start writing down every plant and bird we encountered, but we knew other people had these covered, so we focused on leafminers, gallmakers, and other poorly known insect groups.  We ended up contributing 133 species to the tally; our gall wasps, sawflies, and leaf-mining moths represented small fractions of the 197 Hymenoptera and 442 Lepidoptera recorded, but our gall midges and leaf-mining flies accounted for about a fifth of the 183 Diptera. Here are a few of the things we saw along the way:

Friday afternoon we explored the woods by the Mt. St. Benedict Cemetery north of Hartford. We encountered many different kinds of sawfly larvae, most of which I couldn’t hope to identify, but I recognized the spiky oak feeder above as a species of Periclista, and a Google search for “black locust sawfly” quickly identified the one below as Nematus tibialis (both Tenthredinidae). We also found four different leafminers (two moths, one beetle, and one fly) on black locust. 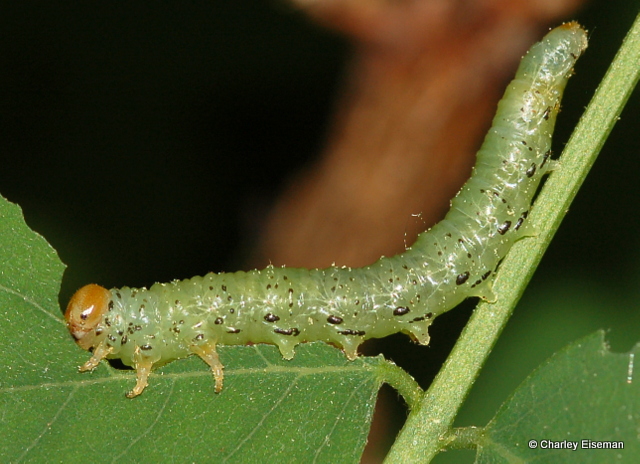 I was also able to recognize these black cherry feeders as Sterictiphora (Argidae), based on their distinctive feeding pattern, which I have written about before. 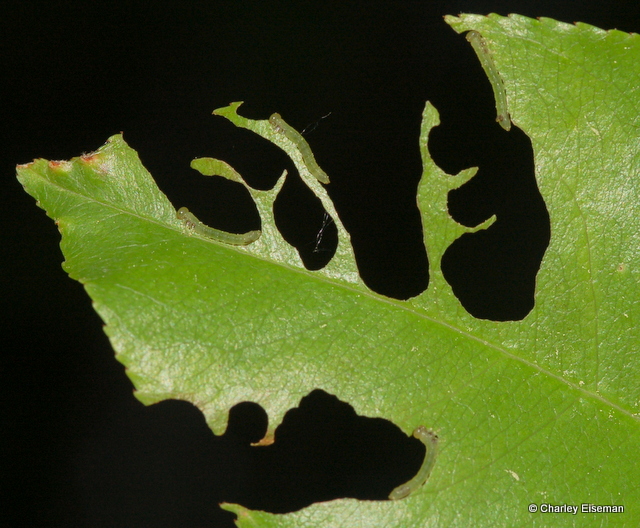 The woods around the cemetery also yielded a walkingstick nymph (Diapheromeridae: Diapheromera femorata)…

…a leaf mine of the apple flea weevil (Curculionidae: Orchestes pallicornis) on shadbush (Rosaceae: Amelanchier)… 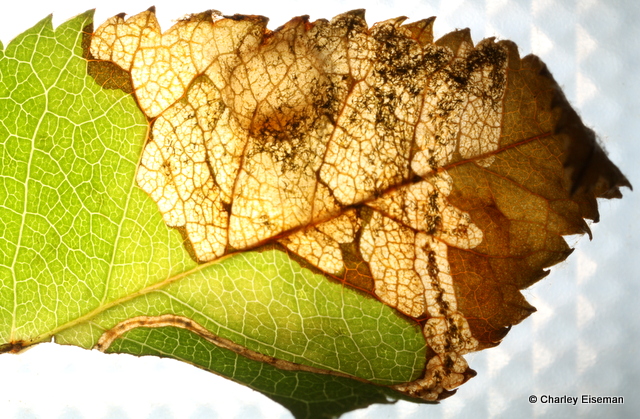 …and this tortricid, which seems to be Cydia nigricana—a new state record, but not a particularly exciting one, since it’s an introduced species. 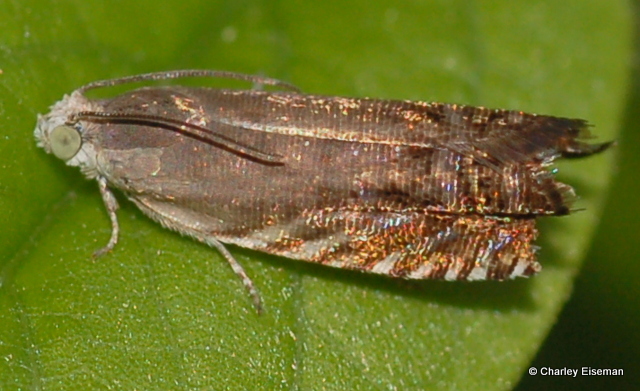 On the way back to the cemetery parking lot, we spotted some mines of Parectopa plantaginisella on fleabane (Erigeron), as well as some superficially similar blotch mines on the same plants which backlighting revealed to be the work of Nemorimyza posticata (Agromyzidae). This fly has not been recorded from Erigeron before, but the intricate feeding lines produced by the larvae are characteristic. I have reared adults from several other genera in the aster family that were not previously known to be hosts of N. posticata, so there is no reason to doubt that it uses fleabane as well. 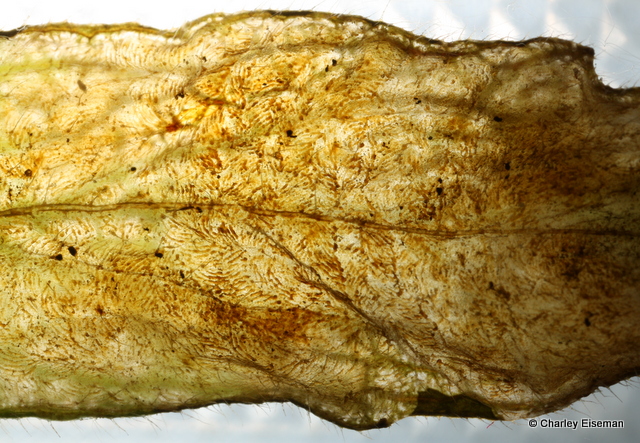 Back at the school, all the naturalists gathered in a big room and pored over their finds. Assorted galls, cocoons, and the like were sent my way, including these beautiful cocoons of Hypera rumicis (Curculionidae) on curly dock (Rumex acetosella).

I took these home with me, and one of the weevils emerged yesterday:

On Saturday morning we walked around the school for a little while, at one point finding leaf mines of seven different genera of agromyzid mines within a one-meter radius. There were also some lovely (albeit nonnative) snails…

From there we headed to the nearby Hockanum River Linear Trail, where one of the first things we found was a new host record for the leaf-mining beetle Mantura floridana (Chrysomelidae). I’m trying to rear them to confirm the record. In the first photo below you can see three of the bright yellow larvae clustered together inside a leaf; the second photo is a good example of the finely squiggly frass that is sometimes produced by leaf-mining flea beetle larvae.

A little further down the trail we found mines of a Bucculatrix angustata larva (Bucculatricidae) in leaves of an aster (Symphyotrichum). 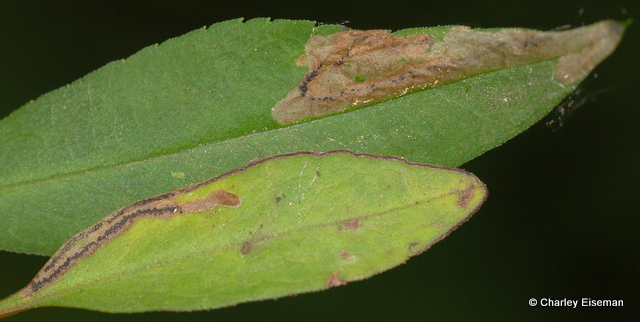 The larva first made a long, narrow mine along the margin of the lower leaf, then moved to the upper leaf and made a broader mine. The larva can be seen clearly in this backlit shot of the same mine: 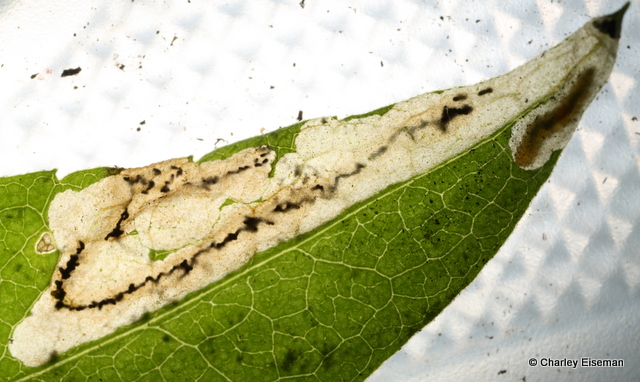 Also along that trail, I found this caterpillar mummified by a species of Aleiodes (Braconidae). I probably could have identified the wasp to species using this guide to eastern caterpillar mummies, but never got around to it. 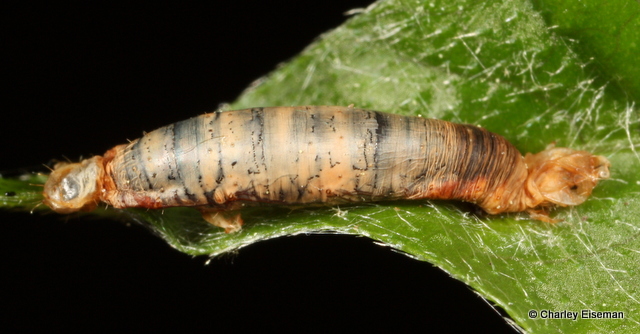 Right at the end of the trail, Julia spotted bark mines of the elusive Viburnum Marmara. Another new state record, and this one for a native species—but of course the species doesn’t have a name yet.

On our way back to the car, I managed decent shots (both with slightly blurry faces) of two striking little insects: Mathildana newmanella (Oecophoridae)… 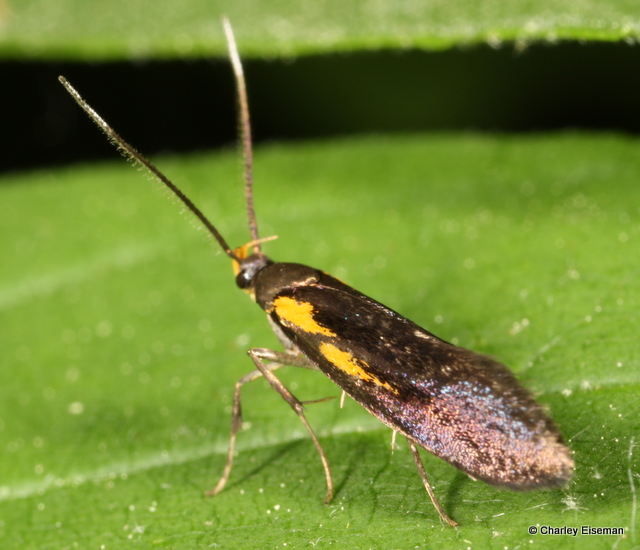 Not a bad day’s work.