Life and Death on Mt. Greylock

This past weekend I attended my third Berkshire BioBlitz. At my first one in 2011, I barely left the parking lot at the summit of Mt. Greylock and photographed 166 different species of insects and arachnids. This time, Julia and I actually made it into the woods, taking about four hours to complete the 0.7-mile Rounds Rock trail loop. Our list this time was not as impressive, mainly because we kept encountering things that were more interesting than just tallying as many species as we could. One of the first things Julia spotted was a leafminer that I’m confident is new to science, so we had to spend a while dealing with that. Not long after we resumed our slow walk, she flipped over an oak leaf to get a better look at a sawfly larva that was munching the edge, and she called me over to see an ichneumon wasp that was stalking up to it on the underside of the leaf. The wasp had almost reached the larva when I got there: 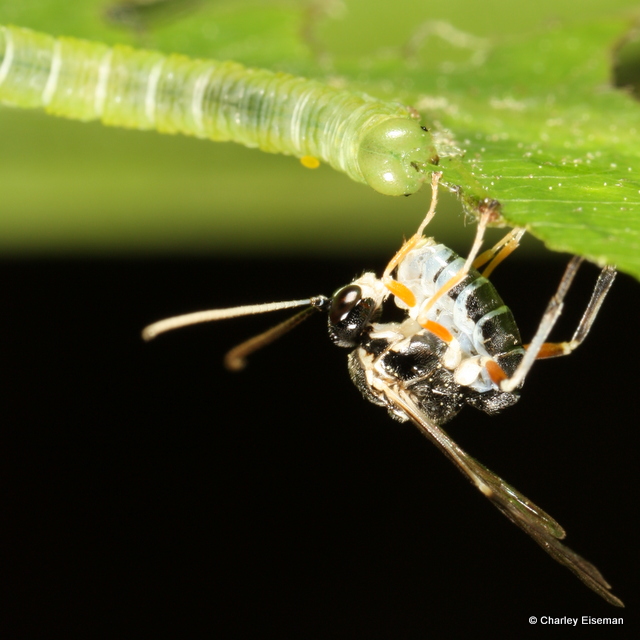 The larva continued to munch away obliviously as the wasp inserted her ovipositor just behind its head. 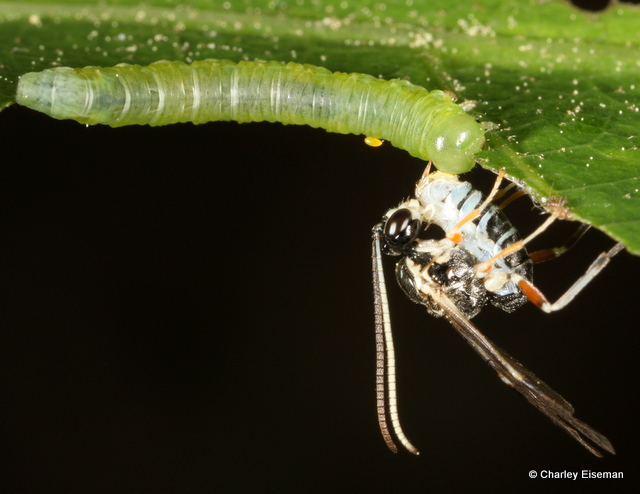 When she was done, she backed away but continued to watch the larva for a while, approaching it again and closely inspecting it, then wandered off. 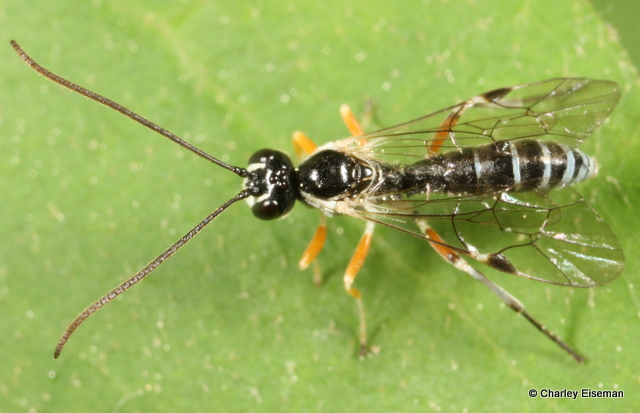 You may have noticed the yellow object stuck to the larva’s thorax.

My best guess is that this is the egg of another ichneumon wasp in the subfamily Tryphoninae. These wasps have stalked eggs that they attach externally to their host larvae. There is a photo of an egg on a preserved specimen here; I’ve never seen a photo of a fresh one. With larvae of two different ichneumon wasps feeding on its innards, it’s probably safe to say this sawfly isn’t going to make it to adulthood.

We plodded along for about 40 minutes until Julia spotted something else that compelled me to spend 15 minutes sitting and photographing it: a treehopper emerging from its last nymphal skin. I got to it just as it was getting its abdomen free, but was able to watch the lengthening of its wings and pronotum.

We didn’t hang around to see it become fully colored. There were a few adult treehoppers like the one below in the immediate vicinity, but the molting one seemed to be a different species.

We had made it just a few steps down the trail when a colony of aphids caught my eye.

There are always other insects to be found in association with aphids, and before long I noticed this syrphid fly larva resting on a stem:

Then I turned around and saw a wasp with its ovipositor stuck in another syrphid larva on the underside of a leaf.

As with the icheumonid parasitizing the sawfly larva, this wasp was poking the syrphid larva’s “neck.” I’m thinking the wasp is a figitid, maybe in the subfamily Aspiceratinae. Both of the observations of this rarely seen wasp group on BugGuide show females ovipositing in syrphid larvae. This one wandered off for a bit, then returned to the larva. 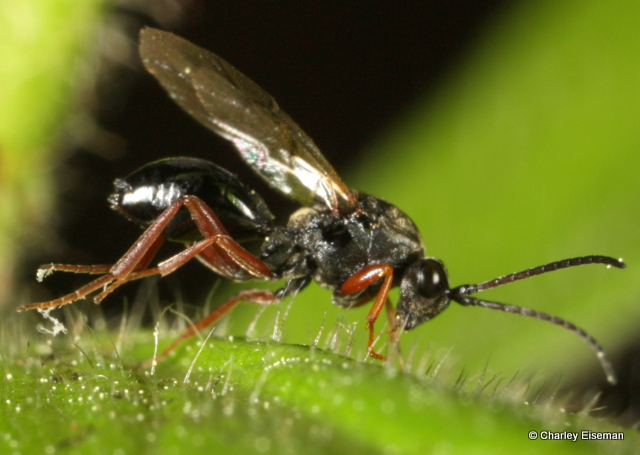 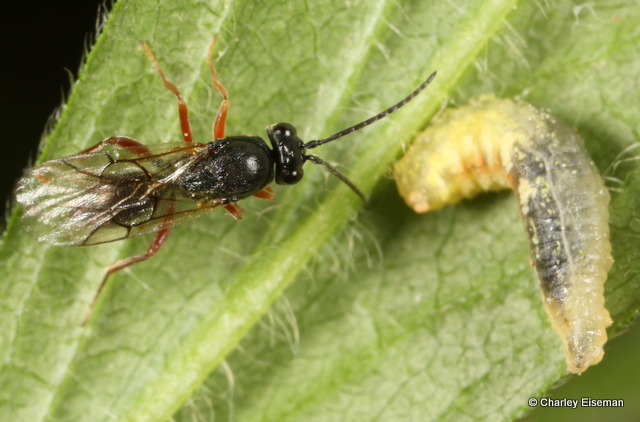 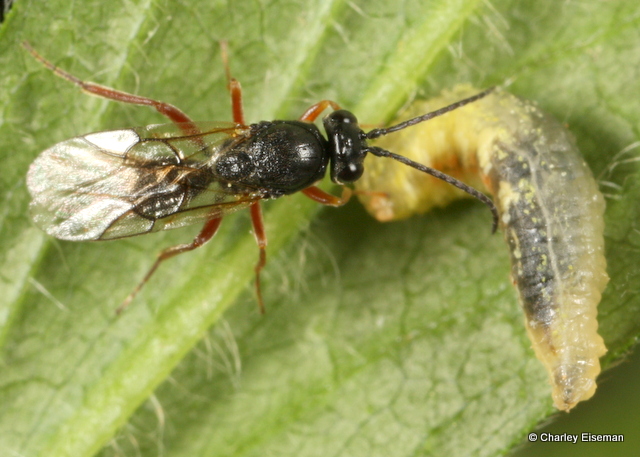 She climbed onto the larva again, this time ovipositing into its abdomen.

Meanwhile, Julia saw the first syrphid larva grab an aphid, and I turned around to see it holding its prey out from the stem, devouring it. 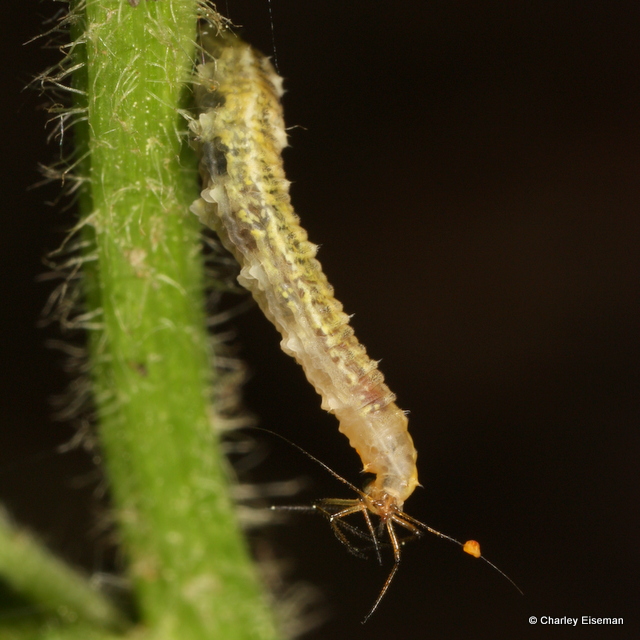 I’m not sure what that yellow blob is on the aphid’s antenna. I initially thought it was a mite, but it doesn’t seem to be. Anyway, we pulled ourselves away from these two dramatic scenes and made our way to the top of Rounds Rock, an open area with lots of lowbush blueberry. I stopped to investigate what appeared to be a tentiform mine on a blueberry leaf, but it it turned out to be a midge gall… with a torymid wasp ovipositing in it.

Here’s a shot of the underside of one of these galls—a simple fold at the edge of the leaf.

There are a number of midge galls like this on various plants, but it appears that none have been recorded previously on blueberry. I’ll see what I can do about rearing some.

A lot to see on a short trail loop—and in fact we hadn’t quite covered half of the 0.7 miles at that point.

I am a freelance naturalist, endlessly fascinated by the interconnections of all the living and nonliving things around me. I am the lead author of Tracks & Sign of Insects and Other Invertebrates (Stackpole Books, 2010), and continue to collect photographs and information on this subject. These days I am especially drawn to galls, leaf mines, and other plant-insect interactions.
View all posts by Charley Eiseman →
This entry was posted in Uncategorized and tagged aphid, Berkshire BioBlitz, BioBlitz, blueberry, chalcid, Diptera, Fagaceae, Figitidae, fly, gall, gall midge, hover fly, ichneumon wasp, Ichneumonidae, larva, Membracidae, oak, ovipositor, parasitism, parasitoid, predation, Quercus, sawfly, Syrphidae, Torymidae, treehopper, Vaccinium, Vaccinium angustifolium, wasp. Bookmark the permalink.

11 Responses to Life and Death on Mt. Greylock