The diamondback moth (Plutellidae: Plutella xylostella) is a European species that is now found all across North America, the larvae feeding on various plants in the mustard family (Brassicaceae). Apparently it’s considered a pretty serious pest, but I’d take it over Cabbage White caterpillars (Pieridae: Pieris rapae) or Cross-striped Cabbageworms (Crambidae: Evergestis rimosalis) any day. 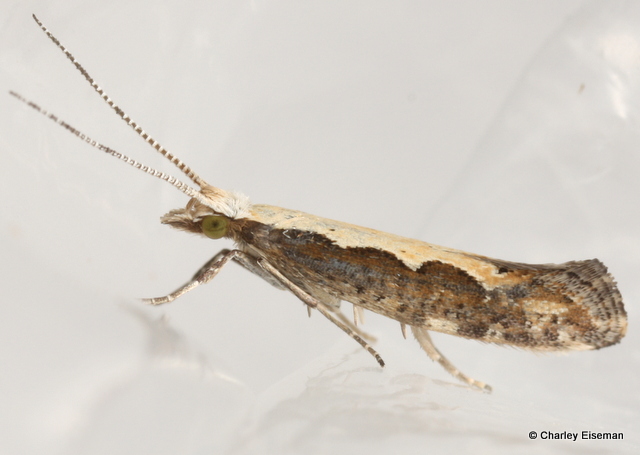 In fact, I was excited to find its tiny leaf mines in our broccoli leaves a few years ago, after stumbling on the fact in the course of my research on leafminers that this species starts out as one.

The mines are just a few millimeters long, barely larger than the bodies of the first-instar caterpillars. In the backlit photos below, you can see a larva swiveling its head to feed, keeping its tail end at the entrance to dispose of its frass.

The larvae soon abandon their mines to feed externally on the lower leaf surface. The one below is face to face with the shed head capsule from an earlier instar, which it has carefully eaten around. The rest of the exuviae are to the larva’s right (below it in the photo). 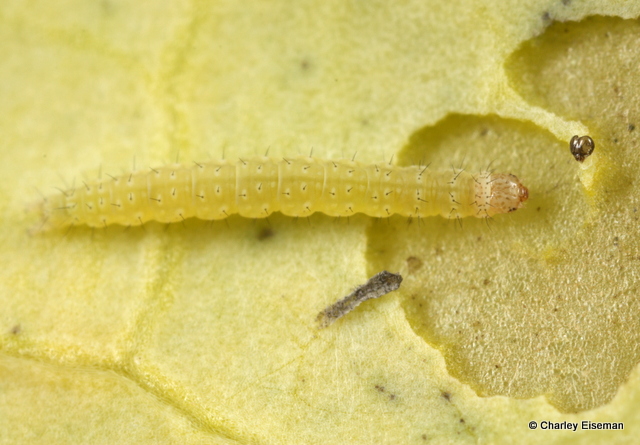 Only when nearly full-grown do the larvae eat little holes all the way through the leaf.

(Incidentally, the yellowing leaf is a result of my having picked it to raise the larvae, not damage caused by the larvae.) When mature, the larva spins an open-mesh cocoon, and the green pupa is plainly visible inside.

When you see a solid cocoon within the open-mesh cocoon, as in this one on peppergrass (Lepidium virginicum), that’s the work of an ichneumon wasp (Ichneumonidae: Campopleginae: Diadegma insulare) that was developing inside the caterpillar all along. After the caterpillar spins its cocoon, the wasp larva finishes devouring the caterpillar, then spins its own cocoon to pupate inside. 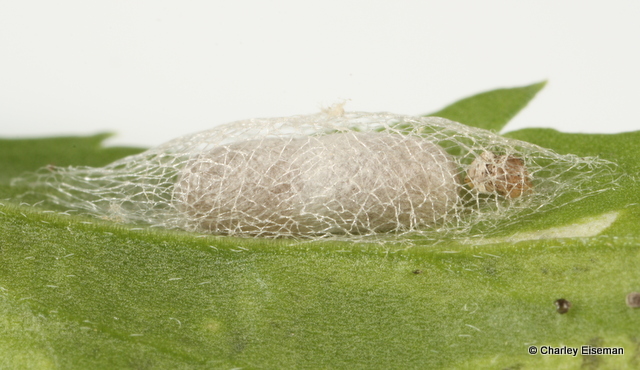 Here’s the wasp that emerged from that cocoon:

Thanks to Andrew Bennett at the Canadian National Collection of Insects, I just learned that this wasp is Isdromas lycaenae (Ichneumonidae: Cryptinae), a hyperparasitoid that fed as a larva on the parasitoid larva. I can only assume it spun its own cocoon within the Diadegma cocoon within the diamondback moth cocoon.

Here’s a Diadegma that emerged from the cocoon of a leaf-mining moth (Gracillariidae: Parectopa thermopsella) I was trying to rear a couple of years ago. No idea what species it might be, if it even has a name; there are 41 described Diadegma species in North America, but there are no keys to identify them.

I am a freelance naturalist, endlessly fascinated by the interconnections of all the living and nonliving things around me. I am the lead author of Tracks & Sign of Insects and Other Invertebrates (Stackpole Books, 2010), and continue to collect photographs and information on this subject. These days I am especially drawn to galls, leaf mines, and other plant-insect interactions.
View all posts by Charley Eiseman →
This entry was posted in Uncategorized and tagged Brassica, Brassica oleracea, Brassicaceae, broccoli, Campopleginae, cocoon, Cryptinae, Diadegma, diamondback moth, Hymenoptera, hyperparasitoid, Ichneumonidae, Isdromas, Isdromas lycaenae, larva, leaf mine, Lepidium, Lepidium virginicum, Lepidoptera, moth, parasitism, parasitoid, peppergrass, Plutella, Plutella xylostella, Plutellidae, pupa. Bookmark the permalink.