How It All Started

Today is an anniversary of sorts. The first weekend of August 2007, I was up in Vermont to perform at the Champlain Valley Folk Festival with my band, PossumHaw, which had formed while I was in grad school in Burlington. Before heading home—ten years ago today—I visited a few properties of the Winooski Valley Park District to do some consulting work (another lingering connection from grad school), and at Muddy Brook Park in South Burlington this caught my eye:

Leaf mines on poison ivy leaves. Just a week earlier, I had sent a proposal for an “invertebrate tracks and sign” book to Mark Allison, nature editor for Stackpole Books, and had received a positive response. So I was beginning to photograph in earnest everything that looked like a bug might have done it. I don’t think I had taken any particular notice of leaf mines before that; the only photograph I am aware of having taken of one before that is this one from August 9, 2004:

And it certainly doesn’t take a leaf mine fanatic to appreciate the artistry of Phyllocnistis populiella (Gracillariidae) on a quaking aspen leaf. Anyway, these poison ivy mines were especially interesting because the adult moths were emerging from them just as I happened to walk by.

I didn’t have a fancy macro lens at the time—in fact, I refrained from getting one until I finished the book, because I wanted to focus on creating a guide to things people could actually see—but for what it’s worth, here is a closer crop of the moth on the left (its pupal skin can be seen poking out of the leaf in the upper half of the frame):

That winter, I discovered the ID Request section at BugGuide.net, and began occasionally posting photos of insects I had associated with various tracks and signs. On March 25, 2008, I got around to posting a photo of this moth, and on April 15 Terry Harrison saw it and confirmed that it was Cameraria guttifinitella (Gracillariidae). This happens to be the first of over 2000 species for which I’ve created a guide page as a BugGuide editor, but more importantly, something clicked as I perused Terry’s website, microleps.org, and as Terry continued to help me solve moth-related mysteries. Working as a field botanist while collecting information about the types of evidence all sorts of invertebrates leave behind, I couldn’t help but become fascinated with leafminers. Their specificity both in choice of food plant and in the type of pattern they produce makes them the most satisfying insects to track, because they can so often be identified all the way down to species based just on what they leave behind.

It didn’t take me long after finishing Tracks & Sign of Insects before I set out to create a “complete” guide to leaf-mining insects—an ever receding target. Just now, as I scrolled back through my recent photos to look for a Cameraria to include here, I noted that the last three leaf-mining moths I photographed were probably undescribed species. Here, however, is one I reared last week from hazelnut (Corylus americana) that we can call Cameraria corylisella with reasonable confidence. I still haven’t gotten around to getting a better photo of C. guttifinitella, so this will have to do for now. 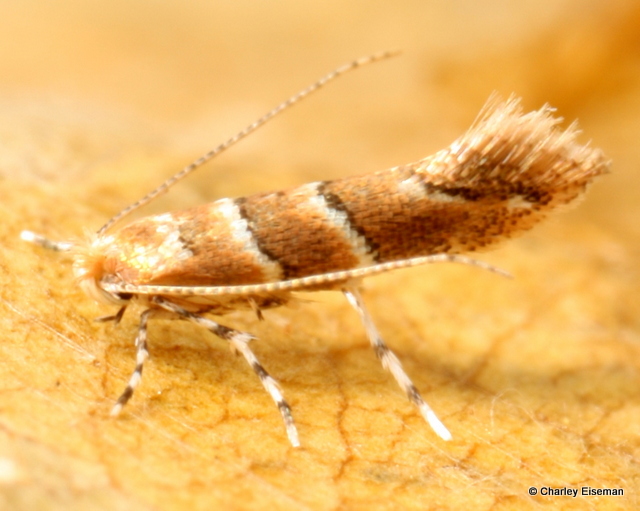 I am a freelance naturalist, endlessly fascinated by the interconnections of all the living and nonliving things around me. I am the lead author of Tracks & Sign of Insects and Other Invertebrates (Stackpole Books, 2010), and continue to collect photographs and information on this subject. These days I am especially drawn to galls, leaf mines, and other plant-insect interactions.
View all posts by Charley Eiseman →
This entry was posted in Uncategorized and tagged Anacardiaceae, aspen, Betulaceae, Cameraria, Cameraria corylisella, Cameraria guttifinitella, Corylus, Corylus americana, Gracillariidae, hazelnut, leaf mine, Lepidoptera, moth, Phyllocnistis, Phyllocnistis populiella, poison ivy, Populus, Populus tremuloides, quaking aspen, Salicaceae, Toxicodendron, Toxicodendron radicans. Bookmark the permalink.

6 Responses to How It All Started