A couple of months ago I gave a sneak preview of some new species I found during the 2016 Berkshire BioBlitz on Mt. Greylock. One of them now officially has a name, thanks to a paper that was just published today*.

Platygaster vaccinii (Platygastridae) is so named because it was reared from a gall on lowbush blueberry, Vaccinium angustifolium. I mentioned this gall in my original post about the BioBlitz, which included photos of a torymid wasp ovipositing into one of the galls. 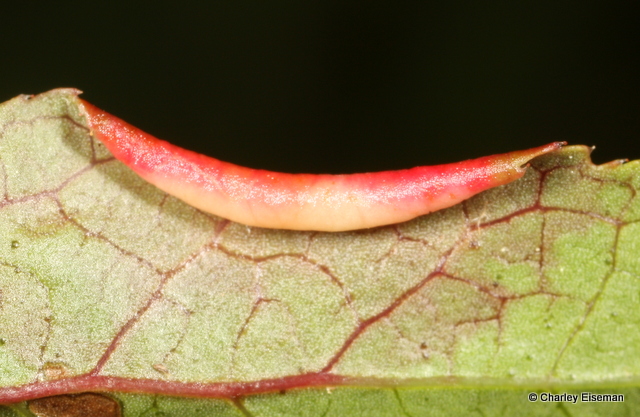 The larva of the midge that causes the gall is bright orange when mature, and it drops to the ground to burrow and pupate. It probably overwinters before the adult emerges.

One of the larvae that emerged from the galls I collected died before I had a chance to put it in a jar of soil, so I sent it to Ray Gagné to examine. He told me he was filing it under Putoniella at the Smithsonian, since it most closely resembled this genus, but said it could be something else. He had never heard of a gall like this on blueberry. I have since found a few similar galls on highbush blueberry (Vaccinium corymbosum) and huckleberry (Gaylussacia frondosa), but so far this single parasitoid wasp is the only thing I’ve managed to rear from them. It emerged this spring, nearly a year after I collected the gall in June 2016.

The new paper describes another new Platygaster species reared from another unidentified and previously unknown midge gall. The host plant is goat’s rue, Tephrosia virginiana, so naturally the wasp is P. tephrosiae. The galls are common on Nantucket, and like the blueberry galls they consist of simple leaf folds. 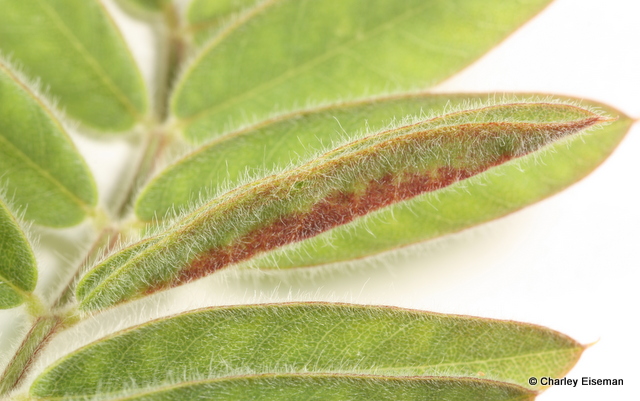 Here’s what the (probably immature) larva looks like; Ray was only able to identify it to the supertribe Lasiopteridi:

As with the blueberry species, this one burrows into the ground when mature. My first attempt to rear it was a complete failure. Last July I got another two larvae from two more galls, and what emerged this spring were two platygastrids. As luck would have it, there was a female (which is what is needed to identify or describe a platygastrid)…

…as well as a male, which got to be the paratype.

I had sent these wasps to Peter Neerup Buhl along with a few others, all of which proved to be something interesting. A series of three females and four males from Nantucket were determined to be Trichacis virginiensis, a species described in 1893 but never before reared. 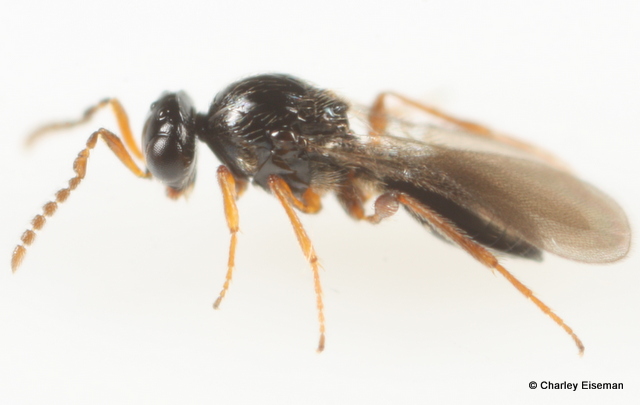 They came from galls on Virginia creeper (Parthenocissus quinquefolia) caused by the midge Dasineura parthenocissi. I also managed to rear a number of adult midges. 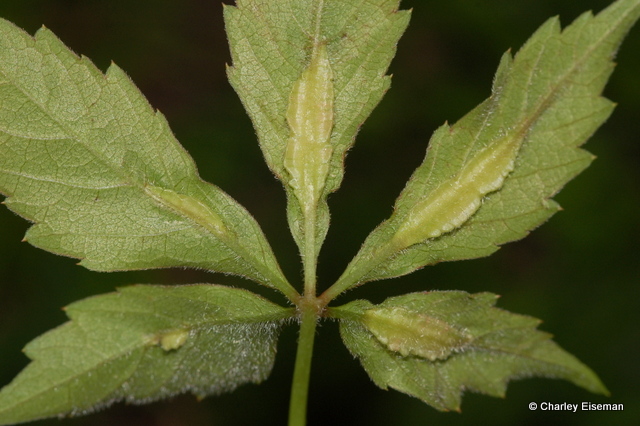 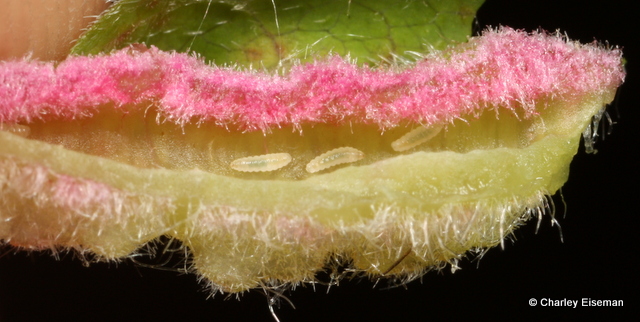 The other wasps (all of these are between 1 and 1.5 mm long, by the way) were several Mike Palmer had reared from midge galls in Oklahoma. Three that he reared from these same Virginia creeper galls were determined to be Platygaster munita, a species common in Europe but new to North America. Four additional specimens that he reared from galls on wild licorice (Galium circaezans) and horseweed (Conyza canadensis) all turned out to be Metanopedias eupatorii, a species Peter had described just six years ago from Trinidad!

Oh, I almost forgot, I also reared some specimens of Platygaster rubi from blackberry galls of Neolasioptera farinosa that I collected in my backyard. This was already a known host association, which seems to be a rarer thing to come across than a new species, as far as I can tell.

I am a freelance naturalist, endlessly fascinated by the interconnections of all the living and nonliving things around me. I am the lead author of Tracks & Sign of Insects and Other Invertebrates (Stackpole Books, 2010), and continue to collect photographs and information on this subject. These days I am especially drawn to galls, leaf mines, and other plant-insect interactions.
View all posts by Charley Eiseman →
This entry was posted in Uncategorized and tagged Berkshire BioBlitz, blueberry, Cecidomyiidae, Dasineura, Dasineura parthenocissi, Diptera, fly, gall, gall midge, goat's rue, Hymenoptera, larva, midge, Nantucket, new species, parasitism, parasitoid, Parthenocissus, Platygaster, Platygaster tephrosiae, Platygaster vaccinii, Platygastridae, Tephrosia virginiana, Torymidae, Trichacis, Trichacis virginiensis, Vaccinium, Virginia creeper, wasp. Bookmark the permalink.

3 Responses to The Endless Diversity of Tiny Wasps, Continued