I always get excited when I encounter the work of leaf-rolling weevils (Attelabidae), even though they are by no means uncommon. I just find it fascinating that these insects have learned to fold leaves into neat little cylindrical packets for their larvae to live inside, without the use of silk or any other adhesive. The female starts by making two cuts in a leaf that meet at the midrib, as shown here:

She then folds, rolls, and tucks the severed portion of the leaf, laying a single egg inside this packet, with the end result looking like this:

The species shown above is Synolabus nigripes, which apparently feeds only on sumac (in this case winged sumac, Rhus copallinum). I’ve only encountered it once or twice; what I usually see are rolls on oak (or occasionally chestnut) made by Attelabus bipustulatus (shown here) or perhaps other species.

Last August when I was teaching my Tracks & Sign of Insects… workshop at the Eagle Hill Institute in Maine, we came across some weevil leaf rolls on speckled alder (Alnus incana), which was a first for me. 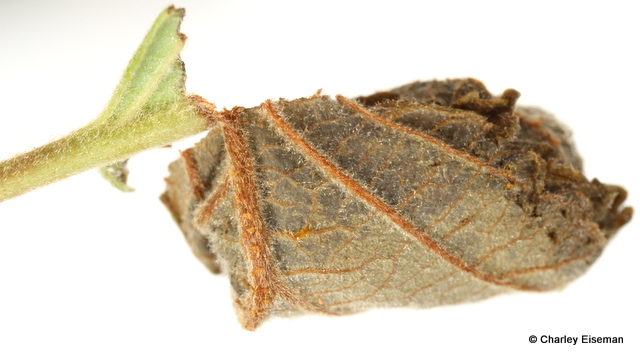 We took a couple of them back to the lab to examine, and one of the participants unraveled one to reveal the egg inside: 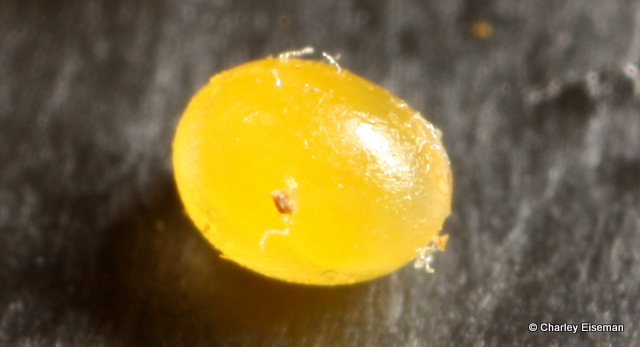 I kept the other one in a vial to see if an adult would eventually emerge. Eight months later—yesterday—it did!

I opened the roll up to see what had been going on in there all this time, and not surprisingly, beneath the outer layer of leaf, everything inside had been converted to weevil poop.

It wasn’t just a disorganized wad of poop though. When it had had its fill of the leaf tissue, the larva had packed all of its frass against the remaining outer leaf layer, creating a smooth-walled, roomy cell in which to pupate.

At one end of the cell, there were a few differently textured, yellowish fecal pellets, which I assume were meconium deposited by the newly emerged adult weevil. 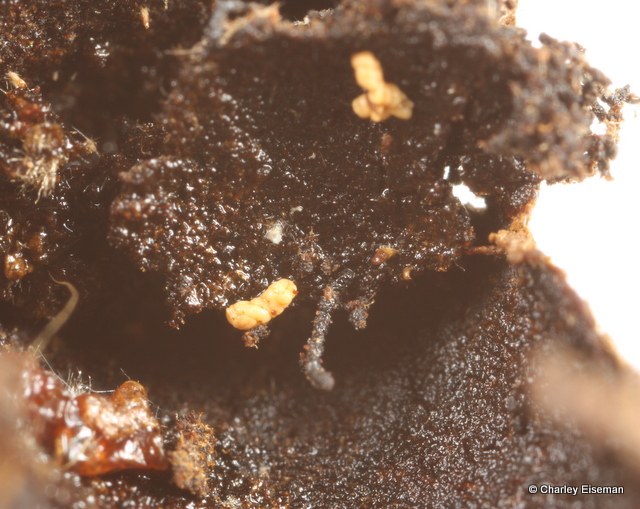 Naturally, before taking the above photos I finished my portrait session with the weevil.

It turns out this is a species (Himatolabus pubescens) that I had met once before, six years earlier and 3000 miles away, nibbling on an oak leaf at Madera Canyon. According to Art Evans’ Beetles of Eastern North America, adults of this species have been found on hazelnut (Corylus) and rosemallow (Hibiscus) as well as alder and oak.

I am a freelance naturalist, endlessly fascinated by the interconnections of all the living and nonliving things around me. I am the lead author of Tracks & Sign of Insects and Other Invertebrates (Stackpole Books, 2010), and continue to collect photographs and information on this subject. These days I am especially drawn to galls, leaf mines, and other plant-insect interactions.
View all posts by Charley Eiseman →
This entry was posted in Uncategorized and tagged alder, Alnus, Attelabidae, beetle, Betulaceae, Coleoptera, Curculionoidea, Himatolabus pubescens, leaf-rolling weevil, weevil. Bookmark the permalink.