A wasp has its day

If you’ve followed this blog for any length of time, you know that a lot of my attempts to rear insect larvae to adults end up producing parasitoid wasps. You have probably also heard me lament from time to time how hard it is to get a specialist to examine these wasps and tell me what they are—not because no one is interested, but because there are so many wasps in the world, and so few people that study them, that those who do are perpetually overwhelmed and need to focus on whatever little slice of the unending diversity they’ve chosen to focus on at the moment if they’re ever going to get anything done. I guess that goes for pretty much all entomologists, actually.

So it was a happy day in May 2016 when Dave Wagner directed Scott Shaw and Eduardo Shimbori to me for specimens they might use in their revision of the New World braconid wasps of the tribe Adeliini. These wasps specialize in parasitizing the larvae of tiny leaf-mining moths in the family Nepticulidae. The wasp larva waits until its host has finished feeding and spun its cocoon before finally devouring it; some time later, the adult wasp chews its way out of the moth cocoon. Although there are a few records of these wasps from other hosts, they seem to all be bogus records resulting from nepticulid larvae wandering into the leaf mines of other insects before spinning their cocoons.

I sent Scott and Eduardo the few Adelius specimens I had in my possession, and José Fernández-Triana kindly located some others that I knew were among the heaps of braconids I had deposited in the Canadian National Collection, and he passed them along. When Eduardo sent me the newly published paper* yesterday, I learned that the latter specimens were the most interesting ones: they constituted the entire type series of a new species, Adelius floridensis Shimbori & Shaw.

I reared the wasps from leaf mines of Fomoria hypericella that Julia and I collected on two different species of St. Johnswort at St. Sebastian River Preserve State Park in Florida back in March 2013. Here’s a larva of F. hypericella munching away in a leaf of roundpond St. Johnswort (Hypericum cistifolium):

The finished mine of this species is more blotchy. Unlike virtually all other nepticulids, Fomoria hypericella spins its cocoon within the mine rather then popping out of the leaf and wandering for a bit before getting ready to pupate. The cocoon is visible in the lower right corner of the photo below (there is also a mine of another larva just getting started in the upper left corner):

Before spinning its cocoon, the larva cuts a crescent-shaped exit slit in the leaf, just as larvae of other nepticulids do before exiting. This gives the pupa a place to pop out when the adult (which has no chewing mouthparts) is ready to emerge. 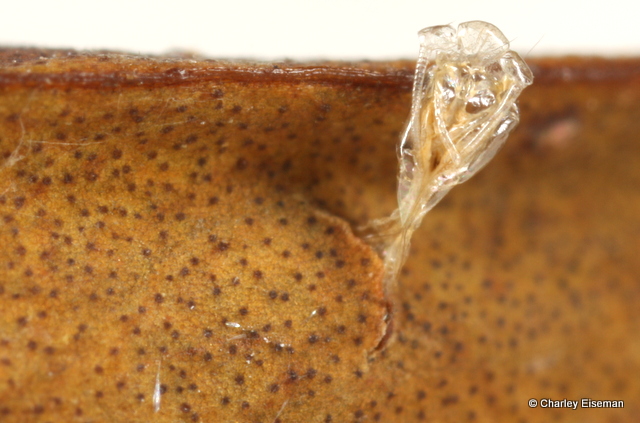 The 2-mm adult moth may not have an exciting wing pattern, but you have to love the flashy orange pompom on its head.

The wasp, Adelius floridensis, is a zippy little thing, just over 1.5 mm long (not counting the antennae), but I was able to get a few decent shots of one as it ran around: 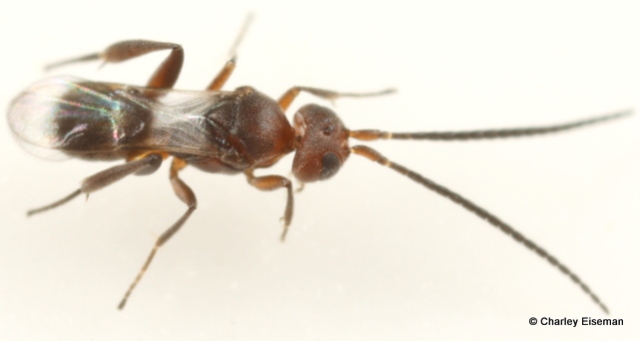 This female’s ovipositor is visible in the second photo—well suited to poking through the leaf epidermis to insert its egg in a nepticulid larva.

There are now 19 described species of Adelius in the Americas (up from three), with just five of these known from the US and Canada. The other one I’ve met is A. coloradensis, which is widespread in the western US and seems to have an affinity for Stigmella species mining leaves of buckthorns (Rhamnaceae). 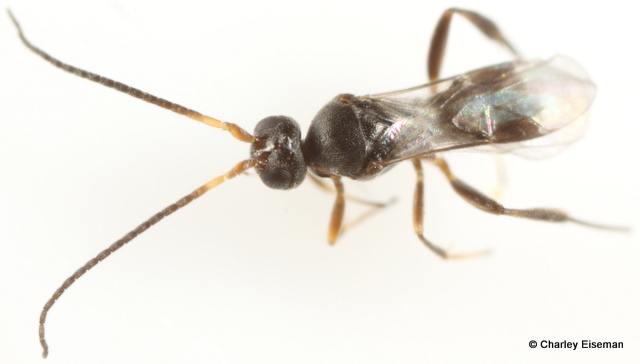 This particular one was reared from an as yet unnamed species of Stigmella that mines leaves of cascara buckthorn (Frangula purshiana). Here are three of the moth cocoons, two with moth pupal exuviae poking out and one with an exit hole chewed by the wasp: 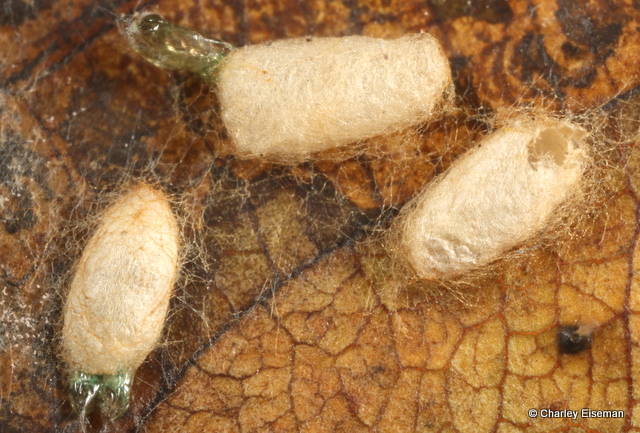 Besides Adelius floridensis, the other newly described North American species is A. canadensis, which is known from just two specimens caught in fir-pine-aspen forest in Alberta in 1988. Adelius nigripectus is known from Indiana and Kansas and has been reared from an unidentified poplar leafminer. The final species, A. fasciipennis, was reared from Zimmermannia phleophaga in 1913. The moth was described at the same time and hasn’t been seen since. Its larvae mined in the inner bark of American chestnut and the species is believed to have gone extinct (perhaps along with its parasitoid) after the chestnut blight made larger chestnut trees scarce. It would be a tricky moth to find if it is still around though; there is no external evidence of the mine until the larva chews a tiny exit hole in the bark and drops to the ground. This was reported to happen between April and June, so if there are American chestnuts near you, it’s worth keeping an eye out, starting right about now!

I am a freelance naturalist, endlessly fascinated by the interconnections of all the living and nonliving things around me. I am the lead author of Tracks & Sign of Insects and Other Invertebrates (Stackpole Books, 2010), and continue to collect photographs and information on this subject. These days I am especially drawn to galls, leaf mines, and other plant-insect interactions.
View all posts by Charley Eiseman →
This entry was posted in Uncategorized and tagged Adelius, Adelius coloradensis, Adelius floridensis, Braconidae, cocoon, Fomoria, Formoria hypericella, Frangula, Frangula purshiana, Hymenoptera, Hypericaceae, Hypericum, leaf mine, Lepidoptera, moth, Nepticulidae, new species, parasitism, parasitoid, Rhamnaceae, Stigmella, wasp. Bookmark the permalink.

8 Responses to A wasp has its day