Narrow-leaved spring beauty (Claytonia virginica) is a rare species where I live, listed as Endangered by the Massachusetts Natural Heritage & Endangered Species Program. So it was a treat to spend the past week in Ohio, where in some places it is difficult to take a step in the woods without stepping on one. On Monday, when it was too nice out to try to do anything productive, I decided to take a closer look at the spring beauties and see what bugs were attracted to them.

At first I wasn’t seeing anything, but when I slowed down and looked more closely, I saw that there were tiny (~1 mm) midges (Chironomidae: Orthocladiinae) all over them.

However, although that last one happened to be climbing around on a stamen, I didn’t see any evidence that they were interested in pollen or nectar, and for all I know I would have seen just as many midges if I had focused on any other plant or object on the forest floor.

Similarly, these spiderlings probably didn’t care what kind of plant they were spinning their communal web on, although they may well have ended up ensnaring some insects that were attracted to the spring beauties. 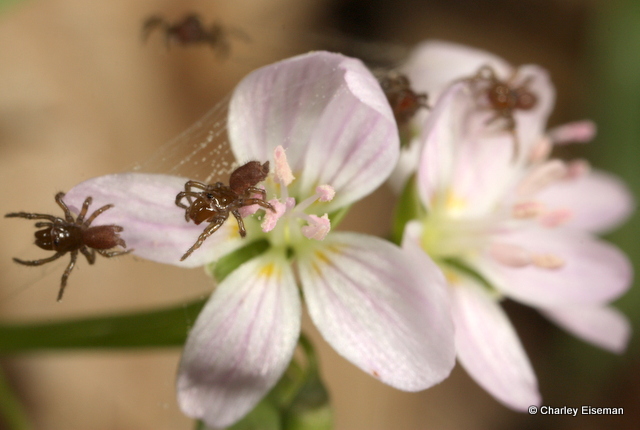 I’m glad I stopped to check them out, though, because they appear to be baby purseweb spiders (Atypidae). These are tarantula relatives that construct tubes of silk, which generally extend from their burrows in the ground up the bases of trees or other vegetation. The spider waits for an insect to crawl onto or land on the surface of the tube, then runs up, bites through the tube, and pulls its prey inside. Based on this paper, Sphodros niger is the only species occurring in (or anywhere near) Ohio. That species typically makes tubes that lie flat on the ground and are often entirely concealed by leaf litter, so it is by no means easy to find. 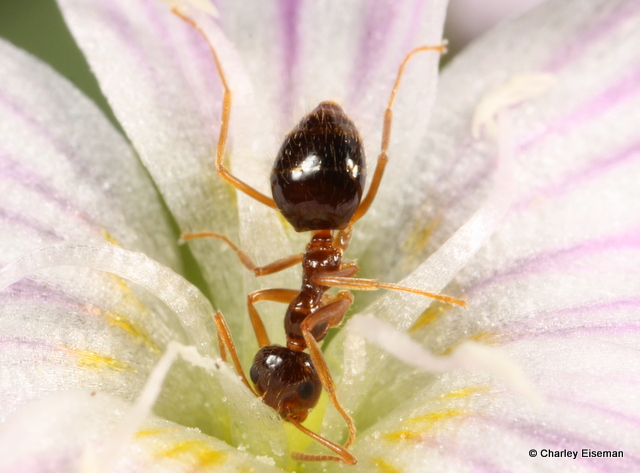 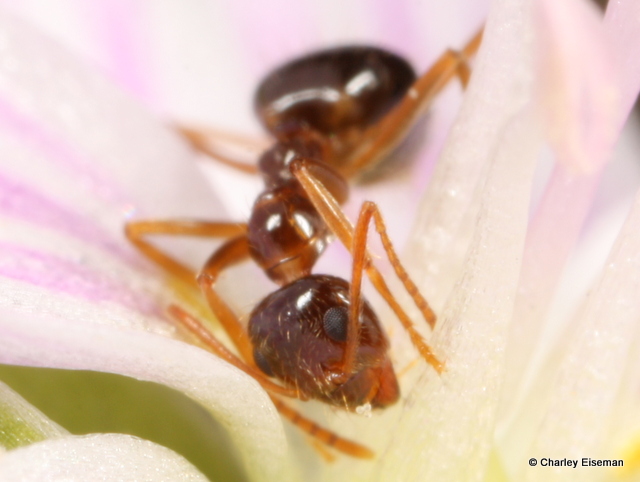 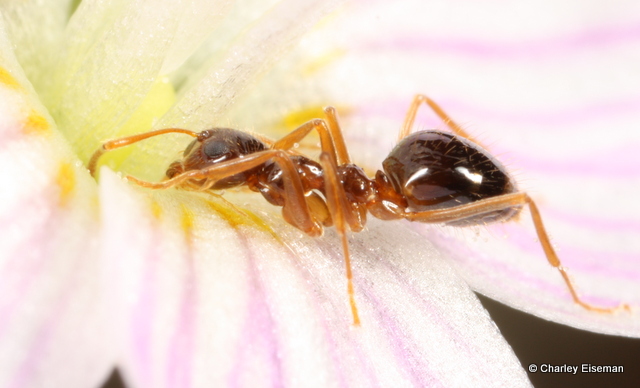 There were also a few much larger (~6.5 mm) ants, Formica subsericea.

Finally, I started seeing some bees. Most were zipping around unpredictably and not staying on one flower long enough for me to even attempt to photograph them. The first to cooperate was this ~5-mm sweat bee (Halictidae: Lasioglossum (Dialictus)):

Among the bees that eluded me was a bright, iridescent green sweat bee. And then, the stars of the show arrived: mining bees (Andrenidae: Andrena), fuzzy and coated with pollen. All of the insects pictured above looked awfully clean and presumably weren’t doing much in the way of pollination, but these mining bees were another story.

I posted these photos to BugGuide.net, hoping John Ascher would confirm my assumption that these bees were Andrena erigeniae, a species that (despite being named for Erigenia bulbosa, harbinger of spring) is a specialist pollinator (oligolege) of spring beauties. Although it may visit other flowers for nectar, it only collects pollen of spring beauties when provisioning its nests. For reasons I don’t have time to investigate, Dr. Ascher identified the photos above only to the genus Andrena, but he identified the one below—the very last one I took on my spring beauty excursion—as A. erigeniae. It certainly is the one with its legs most impressively loaded with pollen. 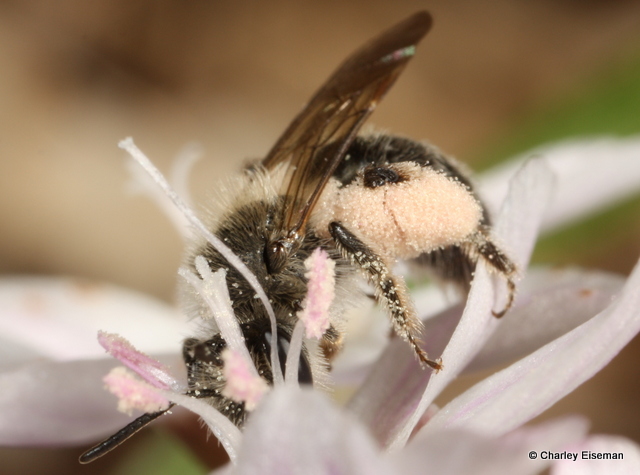 In just a few weeks, the spring beauties will all disappear into the ground until next spring, and Andrena erigeniae will along with it.

I am a freelance naturalist, endlessly fascinated by the interconnections of all the living and nonliving things around me. I am the lead author of Tracks & Sign of Insects and Other Invertebrates (Stackpole Books, 2010), and continue to collect photographs and information on this subject. These days I am especially drawn to galls, leaf mines, and other plant-insect interactions.
View all posts by Charley Eiseman →
This entry was posted in Uncategorized and tagged Andrena, Andrena erigeniae, Andrenidae, ant, Atypidae, bee, Chironomidae, Claytonia, Claytonia virginica, Dialictus, Diptera, fly, Formica, Formica subsericea, Formicidae, Halictidae, Hymenoptera, Lasioglossum, midge, mining bee, Montiaceae, Orthocladiinae, pollinator, Prenolepis imparis, purseweb spider, Sphodros, Sphodros nigripes, spider, spring beauty, spring ephemerals, sweat bee. Bookmark the permalink.