Life in a Pinch of Duckweed

Five years ago, in June 2014, I was conducting a natural resource inventory for the Maine Coast Heritage Trust on a property in Perry, Maine (just across Passamaquoddy Bay from New Brunswick), when I came across this interesting little wetland: 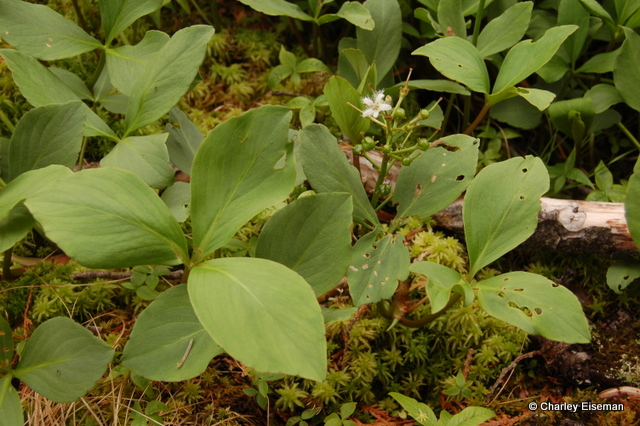 Buckbean isn’t a plant I see very often, and I think this was the first time I got to see its frilly white flowers. 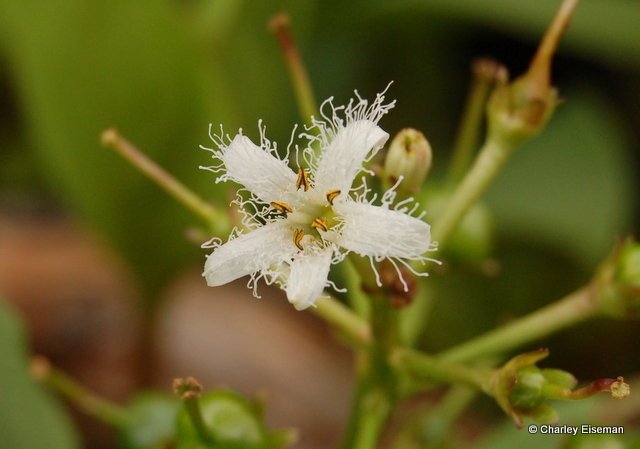 Part of my job was to make a map of the natural communities on the property, fitting all of the vegetation types I found into Maine’s natural community classification*. This wetland turned out to be a pretty good match for what they called the “Low Sedge – Buckbean Fen Lawn.” This is an uncommon community, and I never saw anything else like it in my three years of conducting inventories for MCHT, so when I returned at the end of August I made a point of revisiting the wetland to get a complete list of the plant species there. I even took a pinch of duckweed to key it out under my microscope back at home—if I hadn’t been paying special attention to this little wetland, I probably would have just scribbled down “Lemna sp.,” if I had even noticed the duckweed.

It turned out to be good old Lemna minor, the common duckweed. As I was examining the sample under magnification a few days later to make this determination, I was excited to discover that there were fly larvae feeding inside the tiny thalli (leaves, more or less). One is visible near the middle of this photo: 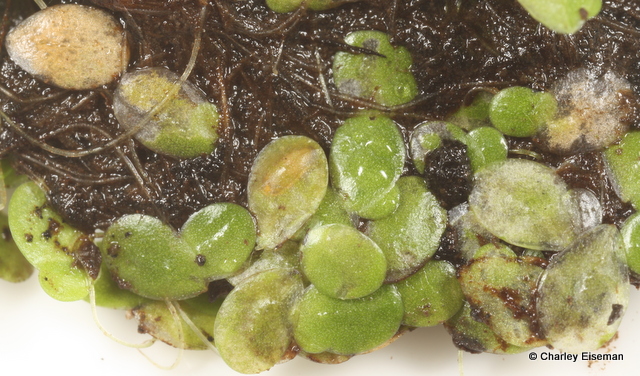 Surprisingly, there are several different insects that feed inside duckweeds, the smallest vascular plants. One of them is a shore fly (Ephydridae) named Lemnaphila scotlandae, after Minnie B. Scotland, who discovered it in the course of studying insects associated with duckweed in Ithaca, NY, throughout the 1930s**. The only other miner Scotland studied was a weevil, Tanysphyrus lemnae, but two other shore flies have also been found mining duckweeds in North America: Hydrellia personata, another apparent duckweed specialist, and H. griseola, which mostly mines in grasses but sometimes turns up in other plants.

The puparia I found were about 1.75 to 2 mm long, much too large for Lemnaphila scotlandae (~1.3 mm) and much too small for Hydrellia griseola (over 2.5 mm). They were within the right range for H. personata, but that species had only been found from Iowa to the West Coast. So I kept an eye on my vial of duckweed to see what would emerge.

In this photo taken a few days later, you can see a fully-formed fly almost ready to pop out of its puparium:

Between September 5 and October 2, nine of these little shore flies appeared:

Here I encountered an all too familiar problem: the insects I had reared belonged to a group that no one in North America studies. I sent them off to Canada with a batch of agromyzid flies, and Owen Lonsdale kindly attempted to run them through the most recent key to North American shore flies (published in 1971), but he didn’t reach a satisfying conclusion. So he passed them along to Tadeusz (Tadek) Zatwarnicki in Poland, who identified them as Hydrellia albilabris, a species known from many European countries but never found elsewhere until now. Whether H. albilabris is a recent arrival in Maine or has been a Holarctic species all along is anybody’s guess; there just hasn’t been much attention paid to these little flies.

Our paper documenting this discovery was just published today***. Why this took five years is another story, and not one that’s necessarily worth telling. So many bugs, so little time!

** Scotland, Minnie B. 1940. Review and summary of studies of insects associated with Lemna minor. Journal of the New York Entomological Society 48(4): 319–333.

I am a freelance naturalist, endlessly fascinated by the interconnections of all the living and nonliving things around me. I am the lead author of Tracks & Sign of Insects and Other Invertebrates (Stackpole Books, 2010), and continue to collect photographs and information on this subject. These days I am especially drawn to galls, leaf mines, and other plant-insect interactions.
View all posts by Charley Eiseman →
This entry was posted in Uncategorized and tagged Diptera, duckweed, Ephydridae, fly, Hydrellia, Hydrellia albilabris, larva, leaf mine, Lemna, Lemna minor, Lemnaceae, Maine, puparium, shore fly. Bookmark the permalink.

3 Responses to Life in a Pinch of Duckweed