Posted on September 29, 2019 by Charley Eiseman

I’m going to have to rethink blaming the cottontails for the senseless pruning of some of the wildflowers we’ve planted in our yard this year. By senseless, I mean the stems are cut and the cut portion is left lying there, seemingly without anything having been eaten. Yesterday morning when I stepped out the front door, I found this example (the plant is a blue mistflower, Conoclinium coelestinum): 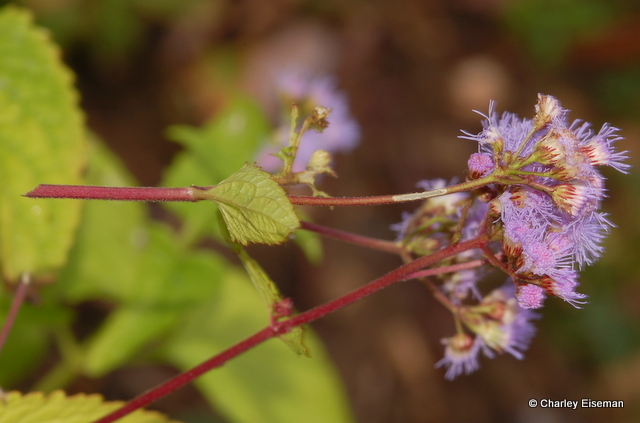 Animal trackers will recognize in the above photo the distinctive 45-degree angle cut characteristic of rabbit browse, and on top of that, this guy was sitting right there looking guilty: 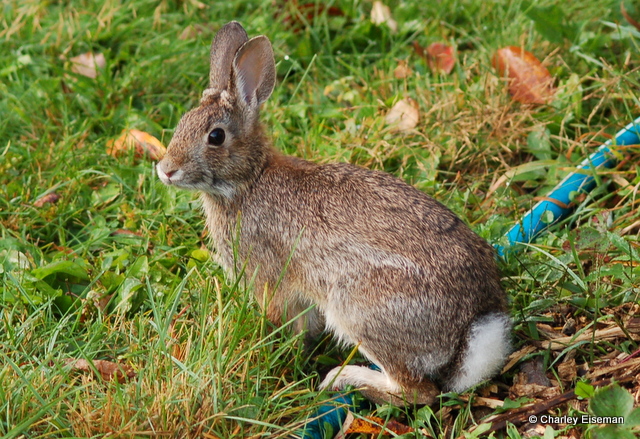 And yet… because I happened to step out at the right moment, I was able to catch the real culprit in the act: 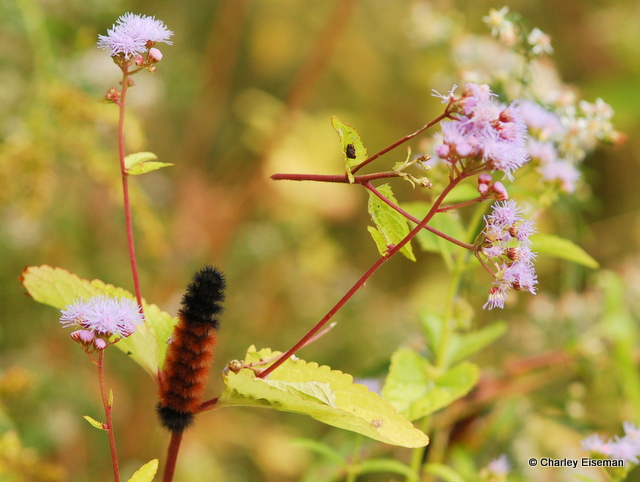 A woolly bear! I never would have guessed, but there it was—the larva of the isabella tiger moth (Erebidae: Pyrrharctia isabella) gnawing away at the freshly cut stem. 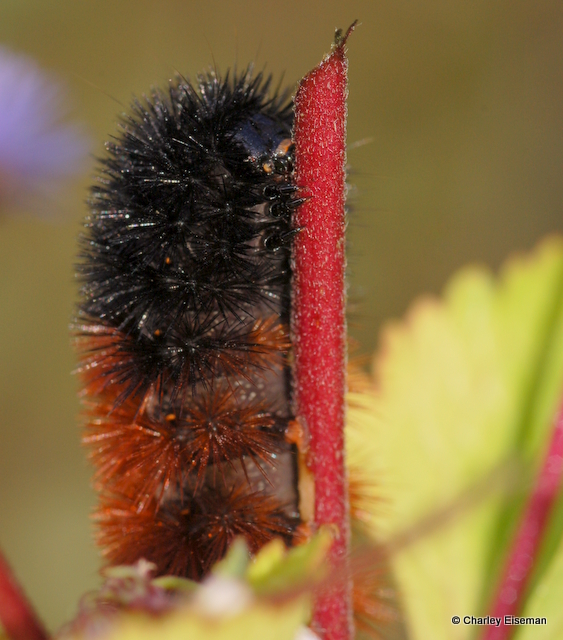 And this was no isolated occurrence. On the next stem over, there was another woolly bear just finishing a similar cut, having already severed the stem in two other places:

And checking the plants on the other side of the house, I found a similar scene:

In some cases, caterpillar droppings had collected on leaves, which would have offered a clue if I had found the cut stems after the caterpillars had moved on.

To be fair, the woolly bears aren’t the only caterpillars around with a taste for blue mistflower stems. The other day I found a banded tussock moth caterpillar (Halysidota tessellaris) in the process of doing this… 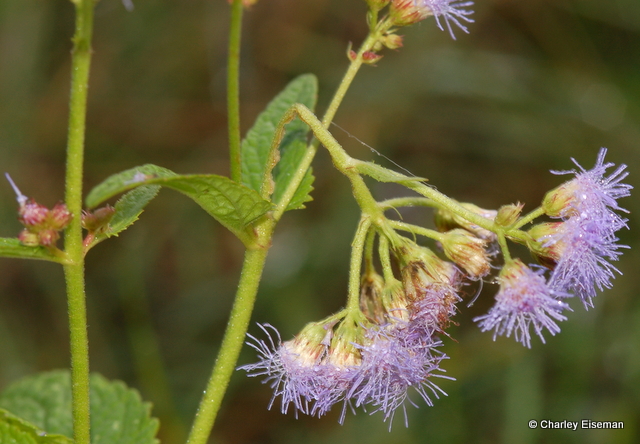 …I had removed that one and tossed it into a patch of some less precious plants. Yesterday I left the woolly bears alone, but this morning when I found a pair of them working together at the base of a stem, I did pluck those off and escort them into the meadow. I can’t imagine why they are suddenly obsessed with blue mistflower, but we’ve been enjoying the flowers for several weeks now and they will succumb to a frost soon anyway, so it’s not really a big deal. Plus it’s been nice to see so many woolly bears bustling about the yard; I just never suspected what they were up to. I still am pretty sure it was the rabbits that mowed down the newly planted wild indigo (Baptisia tinctoria) and New York asters (Symphyotrichum novi-belgii) several weeks ago, but I’ll be watching more closely from now on.

I am a freelance naturalist, endlessly fascinated by the interconnections of all the living and nonliving things around me. I am the lead author of Tracks & Sign of Insects and Other Invertebrates (Stackpole Books, 2010), and continue to collect photographs and information on this subject. These days I am especially drawn to galls, leaf mines, and other plant-insect interactions.
View all posts by Charley Eiseman →
This entry was posted in Uncategorized and tagged Asteraceae, blue mistflower, caterpillar, Conoclinium coelestinum, Erebidae, larva, Lepidoptera, moth, Pyrrharctia isabella, tiger moth, woolly bear. Bookmark the permalink.

10 Responses to Who framed Roger Rabbit