Not long after we started to let our lawn go wild, a couple of blue-eyed grass plants (Sisyrinchium montanum) popped up in one area. Blue-eyed grass owes its name to its grass-like leaves; it is actually in the iris family (Iridaceae).

In the past year or so the plants have really started to multiply; here’s a shot of one patch from this past June:

I’ve been keeping a close eye on this part of the yard to see what else shows up, and this spring I was excited to see some Pedicularis canadensis (Orobanchaceae)—known as wood betony or Canadian lousewort—peeking out among the Queen Anne’s lace, plantain, and dandelion.

The latter three, of course, are all weedy European species, though not without value to native insects (in addition to all being edible for humans). The yard is full of adults and leaf-mining larvae of plantain flea beetles every spring; black swallowtail caterpillars devour Queen Anne’s lace as readily as any native member of the parsley family; and a variety of bees, flies, and other nectar feeders visit dandelion flowers (and later, goldfinches and indigo buntings come to eat the seeds). Pedicularis canadensis, on the other hand, is a native plant supporting a suite of specialized, little-known insect herbivores. It’s also interesting because it is a hemiparasite, stealing nutrients from neighboring plants through its roots. 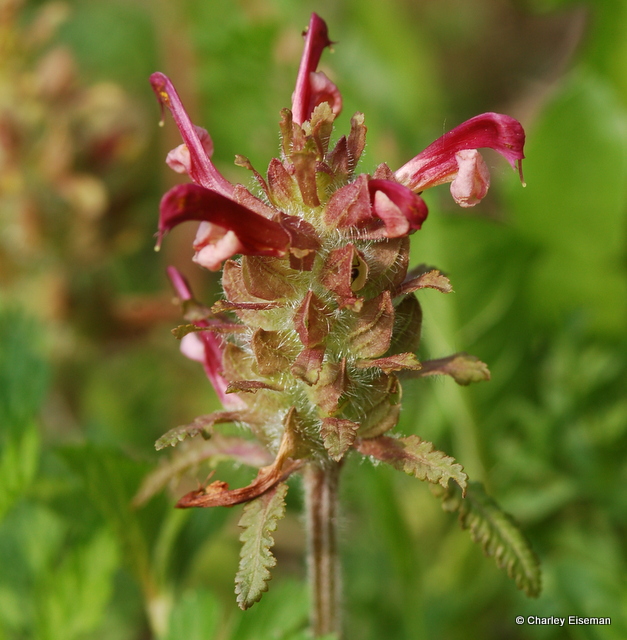 I wondered how it had gotten there, and as I thought about it more, I wasn’t entirely sure I hadn’t sprinkled some seeds there myself. I have a favorite conservation area I try to visit every spring, which includes a meadow that is full of all sorts of unusual wildflowers, including the largest and densest population of Pedicularis canadensis I’ve ever seen. On May 6, 2012, I photographed this ~2 mm fly on one of the Pedicularis flowers there:

At that point I was just beginning to focus my attention on leafminers, and I didn’t recognize this as a Phytomyza, a member of the most diverse genus of “leafminer flies” (Agromyzidae). When I posted photos of this fly on BugGuide.net, Owen Lonsdale identified the genus and added that of the three species known to feed on Pedicularis, this fly most resembles Phytomyza pedicularicaulis, but it doesn’t perfectly match any of them. It turns out that none of these Pedicularis-feeding Phytomyzas are leafminers, and none have been found in New England. Phytomyza pedicularicaulis (known only from Quebec) is a stem borer of Pedicularis canadensis; larvae of Phytomyza tenella (known from Colorado, Quebec, Labrador, and Europe) feed in the seed capsules; and those of Phytomyza pedicularidis (again known only from Quebec) also feed in seed capsules but of Pedicularis groenlandica. So if I could find these flies again, I would at minimum be adding a new geographic record for one of these species and maybe they would turn out to represent a fourth, previously unknown species.

This occurred to me when I visited the conservation area on June 7, 2018, but the flowers had gone by at that point, so I decided to open a few seed capsules and see if there were any larvae inside. I found some right away, so I filled a few vials with seed capsules to try and rear them to adults. I didn’t get around to taking any photos until June 18, when several larvae had emerged and formed puparia:

These were 4 mm long, and at the time I thought “gosh, these are the biggest agromyzid puparia I’ve ever seen!” Of course, the fly I was after was only 2 mm long, so these were clearly something else, but I was distracted right then by this gorgeous 2 mm pteromalid wasp that had also just emerged from one of the seed capsules:

From the photo, Roger Burks identified this as belonging to the genus Lyrcus. Species of Lyrcus have been reared mostly from various weevils and gall midges, as well as a few other insects—the common theme evidently being larvae that feed concealed in plant tissues. I found the hole where this wasp had chewed its way out of a seed capsule, 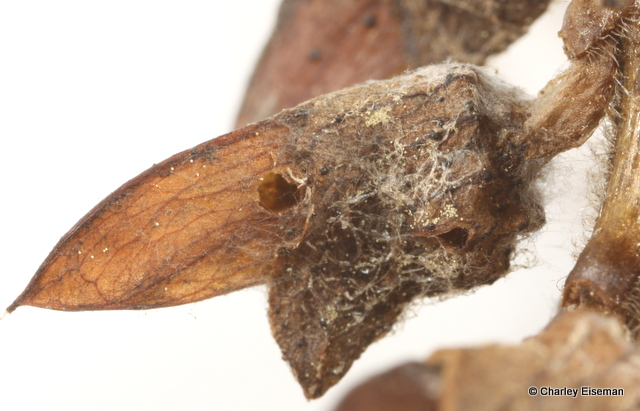 but I couldn’t find any identifiable host remains inside. The next day, a few tiny gall midge larvae (Cecidomyiidae) appeared in one of the vials,

The latter, at least, was a Clinodiplosis. These appear fairly regularly in my rearing vials and it’s usually not quite clear what they’re up to. Larvae of most species feed on fungi; many feed in galls induced by other insects, and some are apparently plant feeders.

These are another mystery; I get frit flies in my rearing vials from time to time as well, and this family includes herbivores, scavengers, parasites, and predators, so again it isn’t obvious what the larvae were doing in the Pedicularis (especially since the vials contained the peduncles/stems as well as the fruits).

On July 10, out popped a 5.5 mm adult of Endothenia hebesana (Tortricidae), leaving its pupal exuviae protruding from the seed capsule in which the caterpillar had fed. 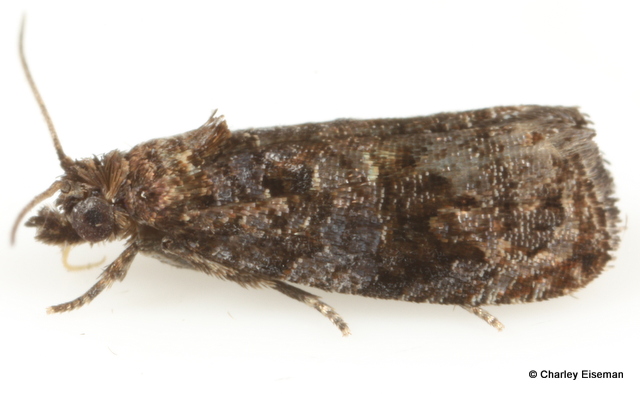 This moth has been reared from seeds of a variety of plants, but the recorded hosts show a decided preference for plants in the order Lamiales.

Nothing further emerged before I put all my rearing containers in the fridge for the winter. But then, beginning a few weeks after I took them out, half a dozen of these ~4 mm flies emerged:

These were, of course, the adults of the larvae that I had seen feeding inside the seed capsules and that had emerged and formed the 4 mm puparia. I immediately recognized them as scathophagids, having become familiar with several leaf-mining species, and I should have recognized the puparia too. What threw me off is that virtually all scathophagids are associated with monocots—100% of the leafminers are (hosts include orchids, true and false Solomon’s seal, Canada mayflower, and false hellebore); as I discussed here, species of Cordilura are stem borers in sedges; and so on. I learned today that these Pedicularis flies are Gimnomera cerea; as far as is known, the larvae develop exclusively in fruits of P. canadensis, whereas the related G. incisurata feeds in fruits of several Penstemon species, which are also hemiparasites. When Brad Sinclair identified the flies, I realized that I already had a scan of a paper (Neff 1968*) that goes into great detail about their natural history. At the end of the paper, Neff speculates that when these hemiparasitic plants parasitize grasses, sedges, and other monocots, they take up organic compounds that are attractive to monocot-feeding insects, and that this may have facilitated the evolutionary shift in host plants.

And finally, just after these flies emerged, two pteromalid wasps emerged from two of the remaining puparia.

I have yet to find anyone who has both the expertise and the time to identify my pteromalid specimens, but luckily Roger Burks can recognize many of the genera from photos, and he says this one is a Lamprotatus. Species in this genus are mostly parasitoids of muscoid flies (which include scathophagids, but mainly anthomyiids), but this is the first record of one (or apparently of any parasitoid) from Gimnomera.

Now the question is, how long will it take all of these bugs to find the Pedicularis that just showed up in my yard?

I am a freelance naturalist, endlessly fascinated by the interconnections of all the living and nonliving things around me. I am the lead author of Tracks & Sign of Insects and Other Invertebrates (Stackpole Books, 2010), and continue to collect photographs and information on this subject. These days I am especially drawn to galls, leaf mines, and other plant-insect interactions.
View all posts by Charley Eiseman →
This entry was posted in Uncategorized and tagged Agromyzidae, blue-eyed grass, Cecidomyiidae, Chloropidae, Clinodiplosis, Diptera, Endothenia, Endothenia hebesana, flower, fly, frit fly, gall midge, Gimnomera, Gimnomera cerea, Hymenoptera, Iridaceae, Lamprotatus, Lepidoptera, lousewort, Lyrcus, Orobanchaceae, parasitism, parasitoid, Pedicularis, Pedicularis canadensis, Phytomyza, Pteromalidae, puparium, Scathophagidae, Sisyrinchium, Tortricidae, wasp. Bookmark the permalink.

4 Responses to Life Lurking in Lousewort