This morning I heard some bluebirds twittering outside the window, so Julia and I took the cue to go out and clean out the nest boxes. The bluebirds’ nest from last year was a dense mass of pine needles and other miscellaneous vegetation, including a single tendril from one of the nearby grapevines (visible below the center in the photo below).

The tree swallow nest on the other side of our front yard vegetable garden was lined with feathers, as is typical for this species. There were some fancy spotted ones that came from the guinea hens that live at a neighbor’s house down the hill and through the woods, several hundred feet away. The ones at the upper edge in the photo below look like barred owl feathers.

Last year was the first time we had a house wren use any of our boxes. House wrens are notorious for filling up multiple boxes with twigs and not necessarily using any of them to nest in. This was the case with both of our backyard boxes last year. Here’s the one from the northwest corner, which in the past has been occupied by chickadees:

When we opened the box at the southwest corner, we were surprised to find the twigs decorated with numerous spider egg sacs:

Now, when I’ve heard people talk about house wren nesting behavior before, I’ve gotten the impression that the wrens just fill up all the boxes because they’re jerks (or, say, trying to crowd out the competition), but this collection of little silken decorations reminded me of the male bowerbirds in Australia and New Guinea, which build elaborate structures in order to attract mates. I checked the Peterson guide to bird nests, and sure enough, it is the male house wren that arrives first and “builds dummy nests of twigs in all or most of available nest sites. Female may or may not accept prechosen site; may or may not accept male’s incomplete twig nest.” If she does accept the twig nest, she adds her own cup of finer material in which the eggs are laid. Nothing in there about the male adding decorations to the twigs, but clearly the one in our yard shared my appreciation for invertebrate architecture. The nest included at least thirteen egg sacs of the common house spider (Theridiidae: Parasteatoda tepidariorum); seven bright yellow egg sacs of pirate spiders (Mimetidae: Mimetus); four tufted egg sacs that I believe belong to cobweb spiders in the genus Euryopis (Theridiidae); four smooth, shining, disc-shaped egg sacs of a hunting (as opposed to web-spinning) spider (Gnaphosidae or maybe Corinnidae); four cocoon bundles of wasps in the genus Cotesia (Braconidae), some of which had a yellow tint suggestive of C. glomerata, a parasitoid of cabbage white caterpillars; three loose, white, spherical egg sacs that I believe belong to the cobweb spider Steatoda triangulosa; three big, fluffy egg sacs that I suspect are from some kind of orbweaver (Araneidae); two cocoons of a spider-parasitizing wasp in the Polysphincta genus group (Ichenumonidae); and one tent caterpillar cocoon (Lasiocampidae: Malacosoma). 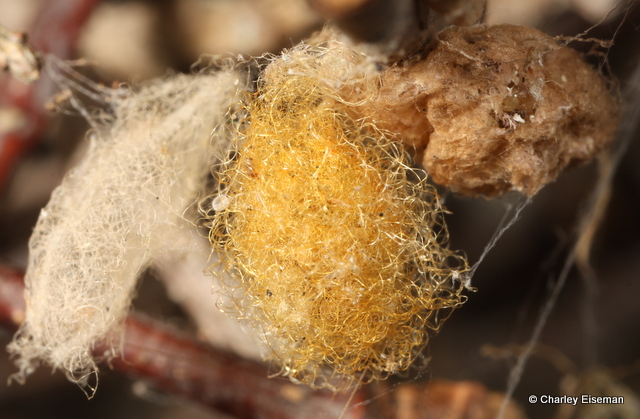 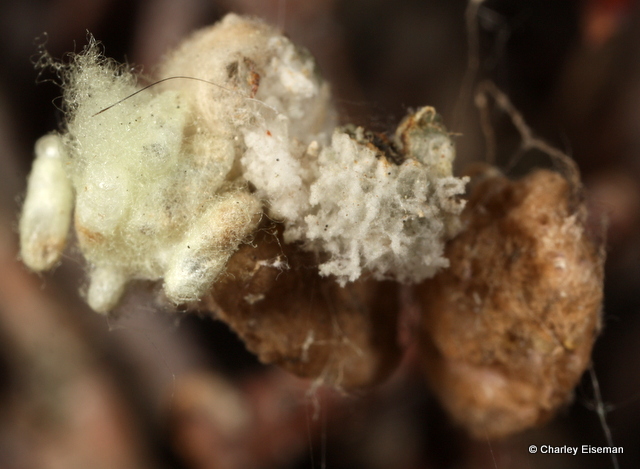 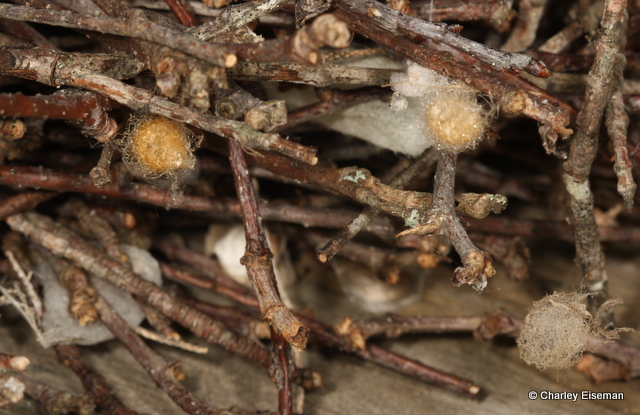 Two more pirate spider egg sacs; an egg sac of Steatoda triangularis (bottom right), and in the background, a tent caterpillar cocoon and egg sacs of three other spider species.

A clear view of the tent caterpillar cocoon.

Shortly after we cleared out that box, a couple of chickadees came to check it out. Maybe they’ll beat the wren to it this year.

I am a freelance naturalist, endlessly fascinated by the interconnections of all the living and nonliving things around me. I am the lead author of Tracks & Sign of Insects and Other Invertebrates (Stackpole Books, 2010), and continue to collect photographs and information on this subject. These days I am especially drawn to galls, leaf mines, and other plant-insect interactions.
View all posts by Charley Eiseman →
This entry was posted in Uncategorized and tagged bird, bird sign, bluebird, Braconidae, cocoon, egg sac, house wren, ichneumon wasp, Ichneumonidae, Lepidoptera, Malacosoma, Mimetidae, Mimetus, nest, pirate spider, Polysphincta genus group, spider, tent caterpillar, Theridiidae, tree swallow. Bookmark the permalink.