Almost every year since we bought our house, Julia and I have spent a few weeks on a road trip in search of exciting new leafminers. At this point we’ve visited nearly every US state and two Canadian provinces. This year, we’re looking forward to sticking around the homestead for the entire growing season for a change, but our past collecting trips continue to bear fruit. Today, for instance, a moth species we discovered in Colorado five years ago finally has a name.

In July 2015, our travels were centered around a visit to our friends in Colorado, Sally Waterhouse and Denny Radabaugh, who were Julia’s biology professors in college and who officiated at our wedding. This was the trip on which we found the rose leaf-mining sawfly Fenusa julia. Exactly one week earlier, we were poking around Sally and Denny’s yard and checking out the unusual (to us) plants in it when we spotted some mines on Thermopsis (Fabaceae), a plant known as goldenbanner or false lupine. 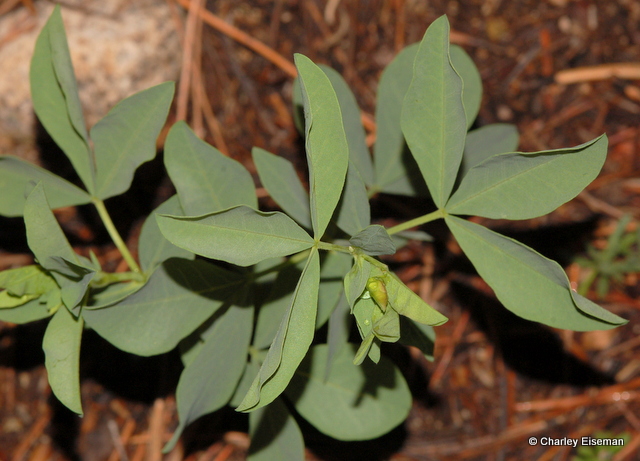 From above, the mines were visible as only slight discoloration, and they were only conspicuous because of the way they caused the leaflets to buckle.

The mines were perfectly distinct when viewed from below. 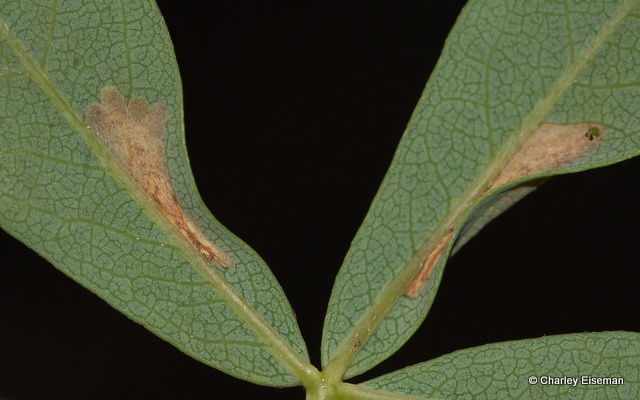 “Underside tentiform mines” like these are characteristic of certain moths in the family Gracillariidae, and on a legume like Thermopsis the expected genus would be Macrosaccus. However, upon collecting some of these mines, it soon became apparent that the larvae inside were expelling their frass: 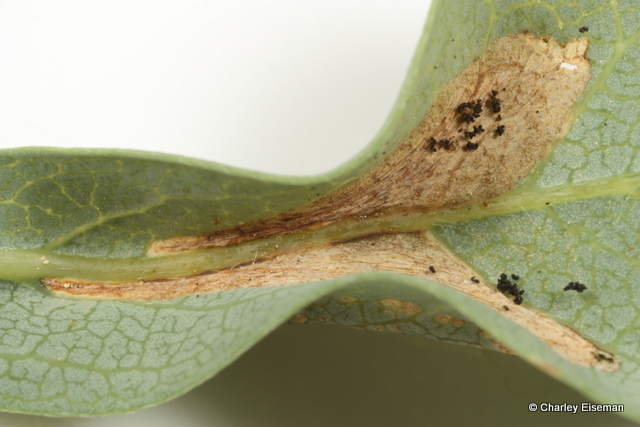 A few gracillariids expel frass from their mines, but none of these are species that make tentiform mines, so this was something weird. At this point my leafminer book manuscript was far enough along that I knew the only documented leafminer on Thermopsis was Parectopa thermopsella (Gracillariidae), described in 1875 by V. T. Chambers, who collected the species in Colorado. No specimens of Parectopa thermopsella are known, but there is nothing in Chambers’ description of the leaf mine or the adult that indicates how it would be distinguished from the moth now known as Micrurapteryx occulta, which Annette Braun described in 1922 as Parectopa occulta and mines leaves of a variety of legumes. We found mines of “Parectopa thermopsella” during that trip to Colorado. They are flat, upper-surface mines, with a more or less lobed or “digitate” shape. Each lobe represents a different feeding excursion; in between bouts of feeding, the larva returns to a point along the midrib where it expels its frass through a hole in the lower epidermis. 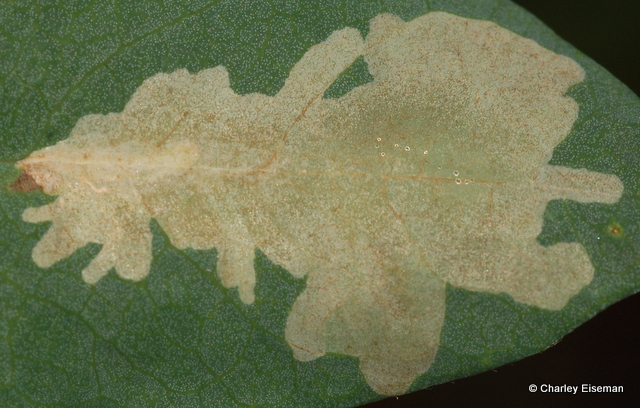 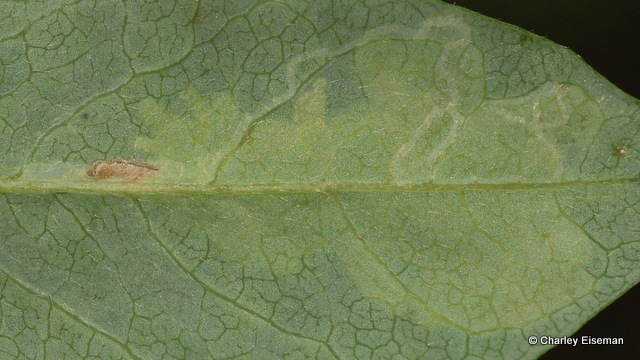 In the lower-surface view above, you can see the initial linear track the larva makes on the lower leaf surface before switching to the upper surface to make a blotch mine. Unfortunately we were unable to rear any adults of “Parectopa thermopsella,” but they would look something like this Micrurapteryx we reared from a similar mine on Astragalus during the same trip to Colorado:

Anyway, ten days after we collected the mystery mines on Thermopsis, some larvae had abandoned their mines and were continuing to feed on the leaves externally, within shelters made by rolling or tying the leaves with silk.

A few days after that, parasitoid wasps started emerging from some of the mines. These little ~1 mm beauties are a female and male Zagrammosoma mirum (Eulophidae):

There were also a few braconid wasps, a little shy of 3 mm long: 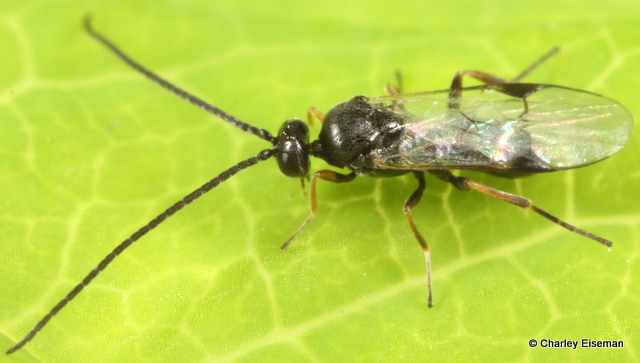 So far, what José Fernández-Triana has been able to tell me about them is that they are in the genus Dolichogenidea. Their DNA barcode matches that of some specimens from Canada, but the species has not yet been identified (if it in fact has a name).

Fortunately, some of the moth larvae escaped parasitism and pupated in early August.

It was clear by now that this moth was not a gracillariid at all, but I wasn’t quite sure what it was. It wasn’t until the following spring that the adults finally emerged:

I knew they belonged to the family Tortricidae, which are commonly known as the “leafroller moths.” I sent them to Jason Dombroskie at Cornell University, who confirmed his impression from my photos that they belonged to the genus Grapholita.  He suspected they represented an undescribed species, but he didn’t have time to investigate further.

Last year, when I heard that moth aficionado Kyhl Austin had become Jason’s grad student and was focusing on Tortricidae, I seized the opportunity to ask Kyhl if he could take a look at these specimens. He was happy to, and within a few weeks he had confirmed that they belonged to a new species and described them in intricate detail. He also dissected and identified all of the other tortricids I’d sent to Cornell, several of which had not been reared before or were not known to start out life as leafminers. Today our paper* was published, in which the new species is named Grapholita thermopsidis and the natural history of six other leaf-mining tortricids is discussed.

At ~5 mm long (wingspan ~1 cm), this is the largest insect species I’ve had the pleasure of naming. It is the third moth species I’ve coauthored, and it occurs to me that each moth has taken five years after its initial discovery to actually get described (although with Marmara viburnella  what took so long was successfully rearing adults, and the species description was published the following year). Many more new moths await, so hopefully I can pick up the pace a bit!

I am a freelance naturalist, endlessly fascinated by the interconnections of all the living and nonliving things around me. I am the lead author of Tracks & Sign of Insects and Other Invertebrates (Stackpole Books, 2010), and continue to collect photographs and information on this subject. These days I am especially drawn to galls, leaf mines, and other plant-insect interactions.
View all posts by Charley Eiseman →
This entry was posted in Uncategorized and tagged Braconidae, chalcid, Dolichogenidea, Eulophidae, Grapholita, Grapholita thermopsidis, Hymenoptera, larva, leaf mine, Lepidoptera, Microgastrinae, moth, new species, parasitism, parasitoid, pupa, Tortricidae, wasp, Zagrammosoma, Zagrammosoma mirum. Bookmark the permalink.