Three years ago, Don and Mignon Davis described a new species of moth, Telamoptilia hibiscivora (Gracillariidae), whose larvae mine leaves of swamp rosemallow (Malvaceae: Hibiscus moscheutos) along the Atlantic Coast*. Specimens were known from Maryland, Louisiana, Texas, and adjacent Mexico, dating back to 1932—sometimes these things take a little time. Swamp rosemallow isn’t a plant I normally encounter in my wanderings, but nonetheless I added T. hibiscivora to my mental list of species to watch for—and, of course, to my complete guide to North American leafminers.

Last spring, when Kelly Omand asked me about some beetles that were emerging from swamp rosemallow seeds she had collected on Nantucket, I immediately made checking those plants a priority for my next visit to the island. In September Julia and I followed Kelly’s directions to the plants and found them in bloom: 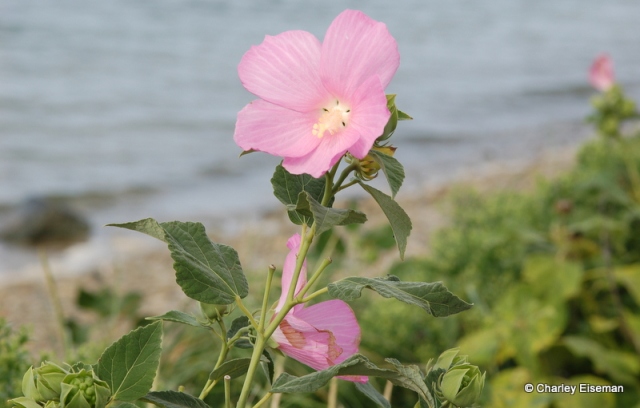 The above photos show the upper and lower surface of the same three mines. Each mine begins as a linear track on the underside of the leaf, then becomes a greenish, interparenchymal blotch: leaving some green tissue adjacent to both the upper and lower epidermis, with the result that the mines are less distinct than leaf mines typically are. But the older larva continues to nibble away at the cells in the blotch, so that it develops more distinct whitish or brown patches. Here’s a backlit leaf with at least three larvae visible inside:

As noted by Davis & Davis, the mature larva exits its mine “and forms an elliptical, white to brownish white cocoon usually on the leaf surface.”

A detail they didn’t mention is that the finished cocoon is decorated with a few “frothy bubbles” as in certain other gracillariid moths (see this post for more examples).

The original description noted that larvae pupate only when subjected to cold temperatures, and that the pupal stage overwinters, so once everybody had finished mining and spun their cocoons, into the fridge they went. I emptied out the bug fridge a little less than a month ago, and yesterday the first adult Telamoptilia hibiscivora emerged: 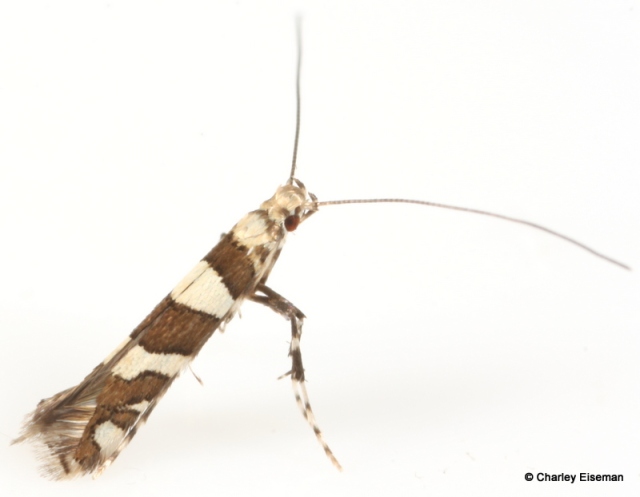 And just like that, the species’ known distribution was extended by 500 miles or so.

Thanks to the “Leafminers of North America” project I created on iNaturalist, I recently learned of the existence of similar mines on saltmarsh mallow (Kosteletzkya pentacarpos) in Everglades National Park. Another new species of Telamoptilia, or a new host record for T. hibiscivora? Someone down there will have to investigate.

As for the beetles that live in swamp rosemallow seeds, we got to meet those too. Here’s a portion of a seed capsule with at least two beetles visible: 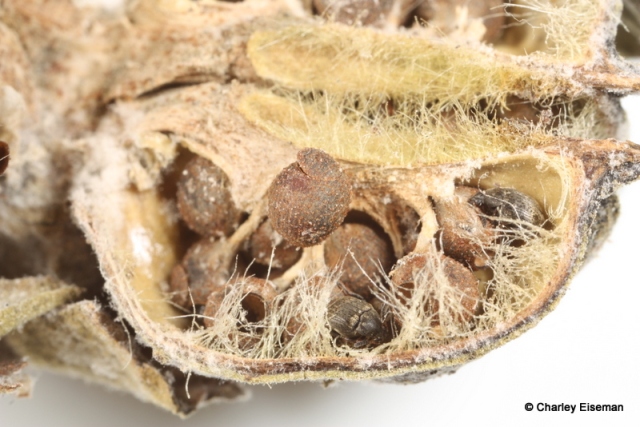 After spending its whole larval life eating out the inside of a single seed, and pupating in the resulting chamber, the adult weevil emerges by chewing a neat circular lid at one end of the seed. 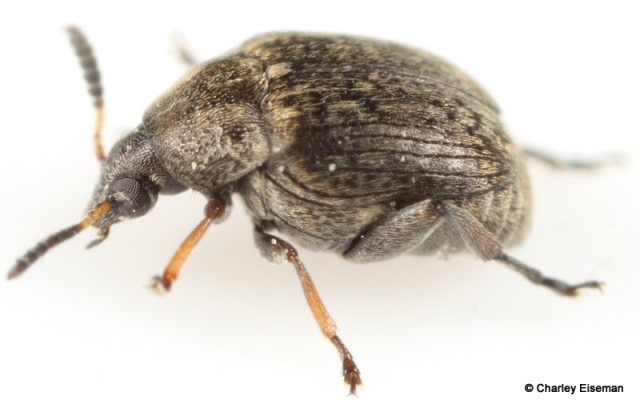 This is one of three Althaeus species in the US north of Mexico, all of which develop inside mallow seeds; I’m not sure exactly which one. They belong to the subfamily Bruchinae (Chrysomelidae), which are known as “bean weevils,” but that name doesn’t work for them since they don’t feed on beans (not to mention that they aren’t really weevils). Kelly calls them “Gonzos,” which seems reasonable to me.

* Davis, Donald R. and Mignon M. Davis. 2017. First report of the genus Telamoptilia from the western hemisphere with descriptions of two new species (Gracillariidae). Journal of the Lepidopterists’ Society 71(4)261-273.

I am a freelance naturalist, endlessly fascinated by the interconnections of all the living and nonliving things around me. I am the lead author of Tracks & Sign of Insects and Other Invertebrates (Stackpole Books, 2010), and continue to collect photographs and information on this subject. These days I am especially drawn to galls, leaf mines, and other plant-insect interactions.
View all posts by Charley Eiseman →
This entry was posted in Uncategorized and tagged Althaeus, beetle, Bruchinae, Chrysomelidae, cocoon, Coleoptera, Gracillariidae, Hibiscus, larva, leaf mine, Lepidoptera, Malvaceae, moth, Telamoptilia hibiscivora. Bookmark the permalink.