First of all, check out this lovely rhodora (Ericaceae: Rhododendron canadense): 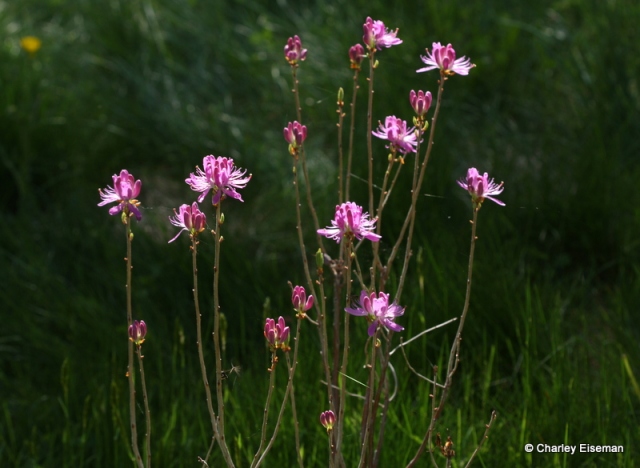 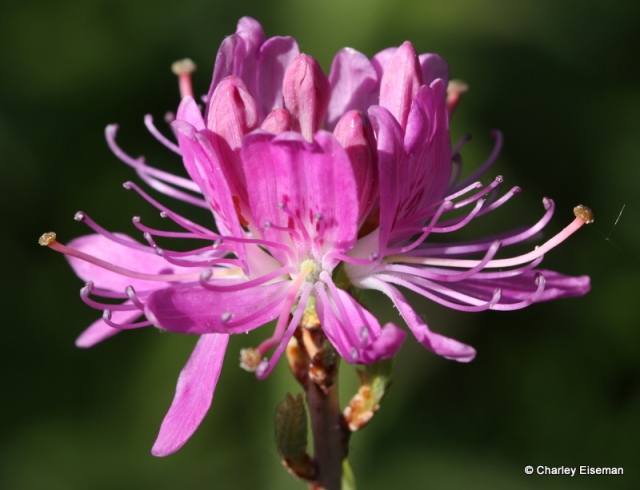 This is a shrub of bogs and other wet habitats that I don’t get to see very often—or didn’t until now. I picked this one up last fall at a local native plant nursery, and it’s now happily blooming in the ever-shrinking lawn next to my house.

Second, I have some updates on the “leafminers of my yard” front. As you may recall, three days ago I found this Aulagromyza cornigera mine on one of our honeyberry bushes:

As of today there still seems to be just the one mine, but that larva has made some good progress: 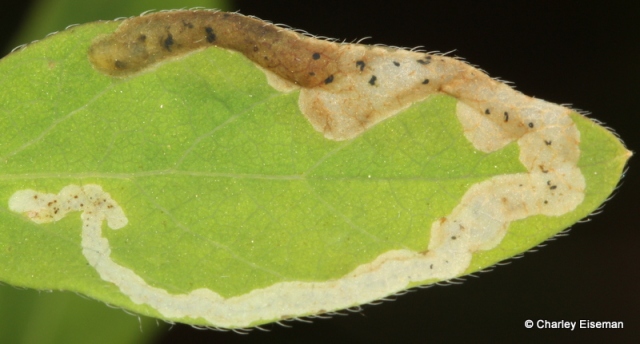 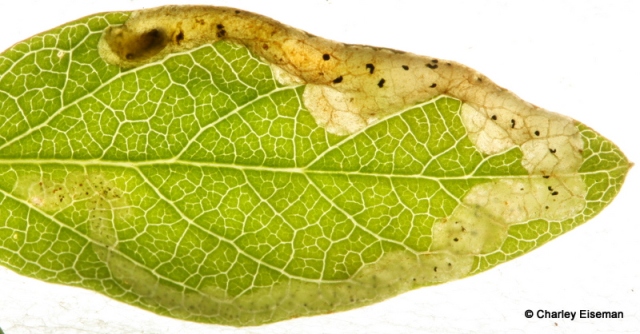 When I took these photos, there was a braconid wasp lurking on a nearby leaf, so this larva may be in trouble…

Meanwhile, as of today leafminer species #10 and #11 have appeared in the yard. One was the miner I was anticipating finding next, and I’ve been checking the blackberry plants (Rosaceae: Rubus allegheniensis) every day for it, but as it turned out I wasn’t even looking for it today when I noticed two of the brownish blotch mines. I couldn’t find the larva at first, but when I came back with a camera and grabbed the plant to tilt it to a good angle for photographing one of the mines, I almost squished the larva between my thumb and forefinger. 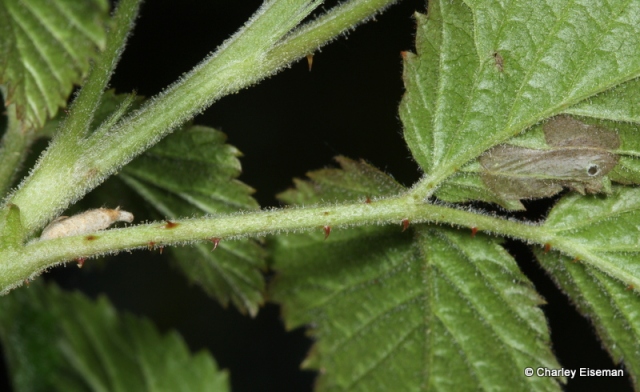 At right in the above photo is the characteristic blotch mine of a casebearer moth (Coleophoridae: Coleophora), with a round entrance hole on the lower surface through which the larva extended the front of its body to feed without leaving its portable house. At left is the larva in its case, pretending to be a bud. Here’s a closer look: 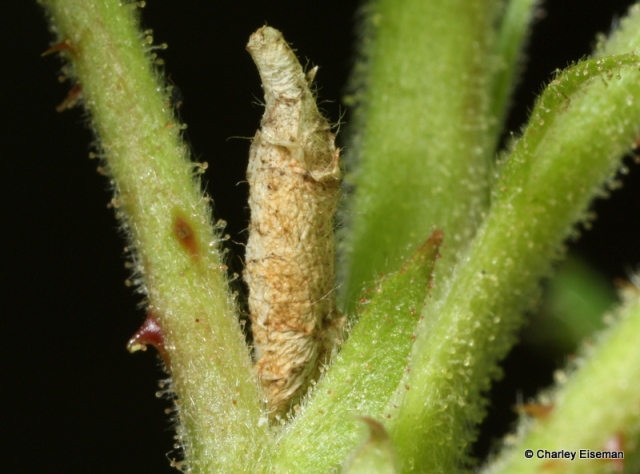 The case is made of silk and pieces of blackberry leaf, and the larva has been adding to it periodically as it grows. The whitish nubbin at the top is the larva’s tiny initial case, which it constructed sometime last year.

In this backlit view of the mine, you can see that the mine is full-depth (all the tissue between the two epidermises has been eaten), and that it is totally clean: the larva keeps its tail end in the case while mining, and periodically backs up to the tip of the case when it needs to get rid of some frass. 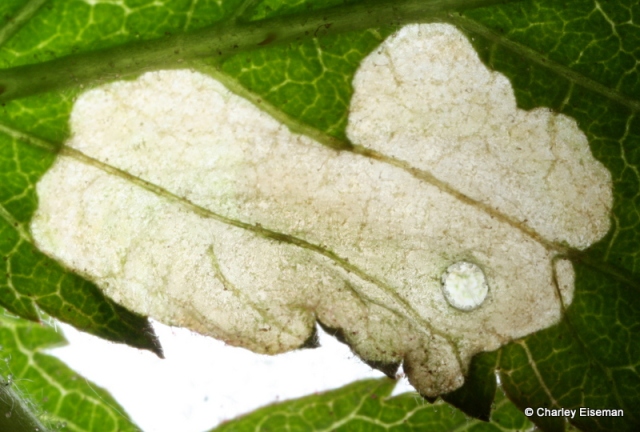 Because it’s feeding on blackberry, we know this casebearer is Coleophora cretaticostella. As it happens, I have reared this species just once, from a larva collected about 50 feet away from today’s larva, six years ago to the day. In fact, my photos of the first larva were taken six years to the minute before I took these photos. The adult emerged at the end of June:

I found leafminer #11 at the opposite corner of the yard, on a black cherry (Rosaceae: Prunus serotina) sapling that started out as a fox scat full of cherry pits deposited in the lawn, also about six years ago. This is another mine I happened to spot out of the corner of my eye as I was walking by.

Today’s finds are a good illustration of the diversity in leaf mines. The Coleophora mine is a full-depth blotch with no frass inside; this second one is an epidermal linear mine with a continuous line of frass down the middle. In an epidermal mine, the larva is feeding within the thin epidermal layer just below the leaf cuticle, drinking the cells’ liquid contents but not consuming any tissue—which is why in the backlit view there is no difference in transparency between the mine and the surrounding tissue. Mines like this are characteristic of the moth family Gracillariidae. I have found no mention in the literature of gracillariid mines on cherry that start out with a long linear portion. However, I have found these mines many times before, on both black cherry and choke cherry (P. virginiana). When complete, the mines are blotchy at the end, as in this example on choke cherry: 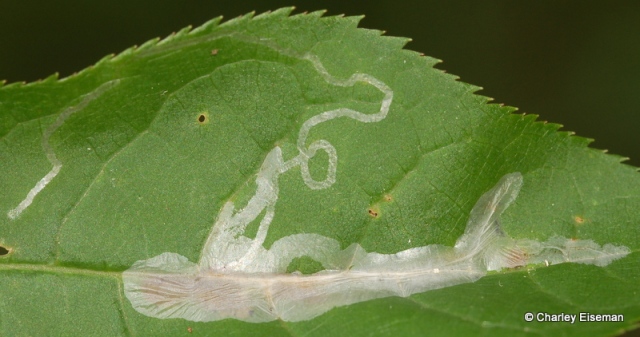 Here’s another example, in which the blotch portion has caused the leaf to curl, partly concealing it:

Terry Harrison has reared adults from mines like this in Illinois; they are the “Parornix sp. 2″ pictured here.

The weird thing is, after several years of failed attempts, I managed to rear adults from several different collections of these mines in July 2018, and all of them turned out to be Caloptilia serotinella rather than Parornix. Unfortunately they emerged while I was on a road trip and I didn’t get to photograph them alive, but here’s an adult of the same species that I found on my wall in December 2018—presumably brought in with firewood: 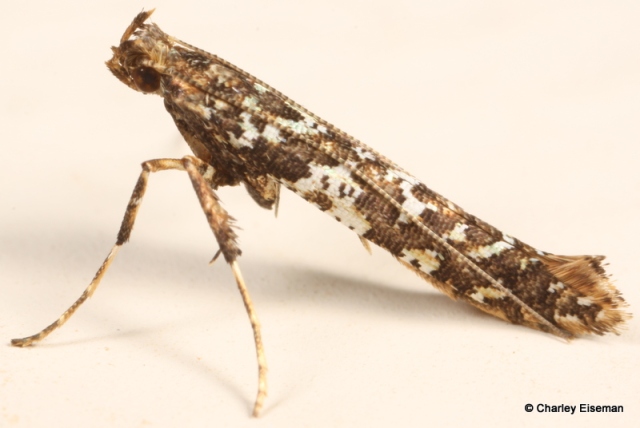 The leaf mine of Caloptilia serotinella has not been described in the literature, but when C. R. Ely described the species in 1910, he noted that the mature larva folds the tip of the leaf over to form a hollow tetrahedron. The vast majority of Caloptilia species similarly abandon leafmining as older larvae and construct a leaf roll of some sort in which to finish feeding.

…And finally, this week has brought the number of plant species I’ve eaten from my yard up to 50:

I’d never tried any of these before this spring. It turns out that young clover leaves are high in protein and perfectly palatable if cooked for a few minutes. And tender shoots of wild sarsaparilla are pretty tasty; as Arthur Haines notes, eating a lot of them raw produces a mild irritation in the back of the mouth, but a little cooking takes care of this. This morning we had some in an omelet, along with winter cress, tower mustard, stinging nettle, curly dock, clover, and other goodies—all collected on the way to the garden, to which I never made it because I had all the food I needed before I got there.

I am a freelance naturalist, endlessly fascinated by the interconnections of all the living and nonliving things around me. I am the lead author of Tracks & Sign of Insects and Other Invertebrates (Stackpole Books, 2010), and continue to collect photographs and information on this subject. These days I am especially drawn to galls, leaf mines, and other plant-insect interactions.
View all posts by Charley Eiseman →
This entry was posted in Uncategorized and tagged Agromyzidae, Aulagromyza, Aulagromyza cornigera, black cherry, blackberry, Caloptilia, Caloptilia serotinella, Caprifoliaceae, cherry, Coleophora, Coleophora cretaticostella, Diptera, fly, Gracillariidae, leaf mine, Lepidoptera, Lonicera, moth, Prunus, Prunus serotina, Prunus virginiana, Rosaceae, Rubus. Bookmark the permalink.