You may recall that back in early April I said that this year I would be listing not just the leafminers and edible plants I find in my yard, but also the sawfly larvae. So ever since I spotted the Monoctenus female laying eggs in the arborvitae hedge along the road, I’ve been checking every couple of days or so for her offspring munching away on the needles. No luck so far, but on today’s trip to the hedge I did see my first sawfly larva of the year—not on the arborvitae but on a black cherry sapling growing right next to it. Julia was able to guess what I’d found right away, with no other information than that I had found a sawfly larva, combined with my level of excitement at having found it:

Yes, Sterictiphora, eating its characteristic “curious winding slit” into the leaf, as first described by Harrison Dyar back in 1897. I wrote about my first encounter with one of these in June 2013, and in May 2015 I shared some more examples, including photos of the adult S. serotina I reared from that first larva. This one in my yard may or may not be S. serotina; there are six Sterictiphora species in North America, and at least four of them feed on Prunus species (though one is known only from the western US). Sterictiphora prunivora feeds on both Prunus and Amelanchier; S. sericea had no known hosts until I reared one from Amelanchier last year*; and S. transversa (with the curious distribution of Alaska, Alberta, and Maryland) still has not been associated with any plant.

Here’s a closer view of today’s larva (the field of view here is 11 mm wide): 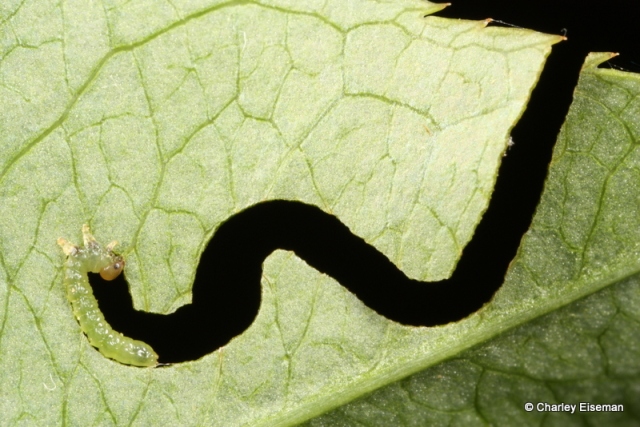 On a neighboring branch of the same black cherry sapling was a female Orchestes pallicornis. Just yesterday I wrote about having seen this species in my yard, and said that “Soon, females will be inserting eggs along the midribs of leaves, and the larvae will form linear mines extending toward the leaf tips.” Well, there she was, chewing her third oviposition hole in the midrib of a leaf at the tip of the branch: 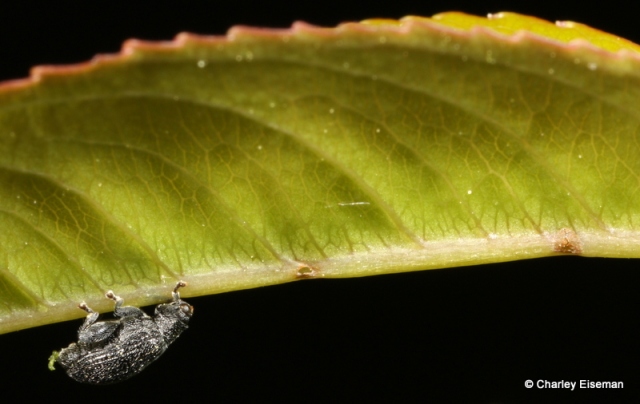 I don’t think I’ve ever actually witnessed this before, so naturally I spent a while watching her, in between bouts of admiring the Sterictiphora‘s sinusoidal splendor. Two minutes after I first noticed her, she turned around and began inserting an egg in her most recent hole.

Wow, I didn’t think I had sat there for that long, but according to the time stamps on the photos, it was 36 minutes later that I took this picture of her excavating a fourth hole:

If you look closely you can see the dark spot where her little black schnoz is buried in the midrib. And here she is inserting an egg in that same hole: 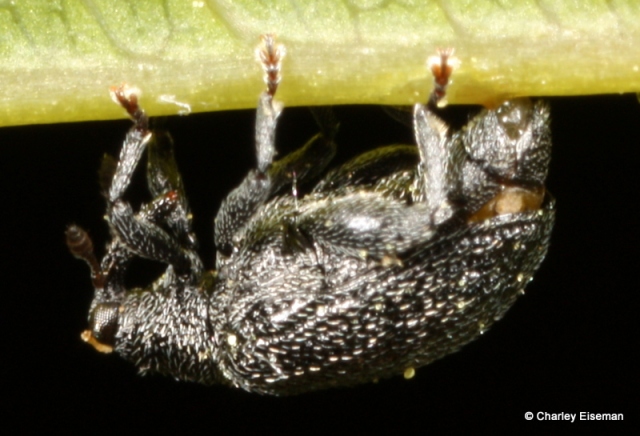 While I sat there entranced by these two tiny bugs doing their thing, I suddenly noticed that this cherry sapling had several bark mines on it:

Since the mines are on a black cherry, we know that they were made by a larva of the moth Marmara serotinella (Gracillariidae)—miner #16 for this year’s list. If you read yesterday’s post, you’ll remember that I have a white ash branch in a vase on my kitchen counter being mined by a larva of M. fraxinicola. Yesterday I wrote that “Over the past ten months or so, the larva mined 22 cm toward the tip of the branch, then turned around and mined 20.5 cm back down.” Amazingly, as of right now (~27 hours later), it has lengthened the downward mine to 23 cm and turned around once again, mining 5 cm back up the branch. Clearly Marmara larvae pick up the pace as they reach maturity.

And finally, since yesterday’s post, I was able to add one more species to the “plants I have eaten” list:

The strawberries in the open-air gardens are in flower right now, but we have a few in our hoop house that got going early. I would have gotten to add strawberry to the list a few days ago, but some little rodent devoured the first two fruits just as they were developing a blush of red. I then placed inverted jars over the three ripest remaining fruits, and that provided adequate protection from the buck-toothed bandits to allow them to turn solid red.

Oh, and on my way back to the house from the photo session, I spotted another Sterictiphora larva on a different black cherry sapling. Can’t get enough of these little cuties. 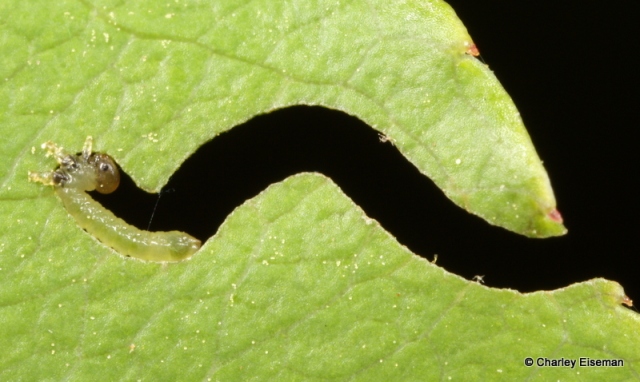 I am a freelance naturalist, endlessly fascinated by the interconnections of all the living and nonliving things around me. I am the lead author of Tracks & Sign of Insects and Other Invertebrates (Stackpole Books, 2010), and continue to collect photographs and information on this subject. These days I am especially drawn to galls, leaf mines, and other plant-insect interactions.
View all posts by Charley Eiseman →
This entry was posted in Uncategorized and tagged Argidae, beetle, black cherry, cherry, Coleoptera, Curculionidae, Curculionoidea, Gracillariidae, Hymenoptera, larva, Lepidoptera, Marmara, moth, Orchestes, Orchestes pallicornis, Prunus, Prunus serotina, Rosaceae, sawfly, stem mine, Sterictiphora, weevil. Bookmark the permalink.