First, another announcement: This coming Friday morning I’ll be presenting another free webinar; this one is titled “Native Plants as Insect Habitat.” I’ll go through a number of common native New England plants and discuss some of the host-specific bugs that depend on them. I’ve found most of them in my yard, and yes, some of them are leafminers. You can register here.

And speaking of leafminers in my yard, you didn’t think I’d stop counting at 100, did you?

Leafminer #101: Cerodontha dorsalis (Agromyzidae).  Julia spotted this mine on the leaf sheath of a corn stalk (Poaceae: Zea mays) in our garden on Sunday.  I usually stay away from common names for leafminers, but this one has a name I can get behind: the “grass sheathminer.” It feeds on a wide variety of grasses, making long, narrow leaf mines that almost invariably end up in the sheath, where the puparium is formed.  I’ve never seen a mine of this species on corn before, but in this case the entire mine was in the sheath.  (The photo below is rotated so that the ground is to the right.)

Having already found 100 species in my yard when summer had just barely started, I was beginning to wonder if I’d been misremembering in thinking of spring as a relatively slow time for leafminers.  But then I found another 17 species today.  Things seem to be picking up!

Leafminer #106: Phylloporia bistrigella (Incurvariidae), on the same paper birch.  I’ve never seen this species in my yard before (or in Massachusetts, for that matter), nor have I ever found a mine with a larva inside before, so I’ve never reared this species and don’t have a photo of an adult.  I’ll have to watch the birches more closely next spring and early summer. 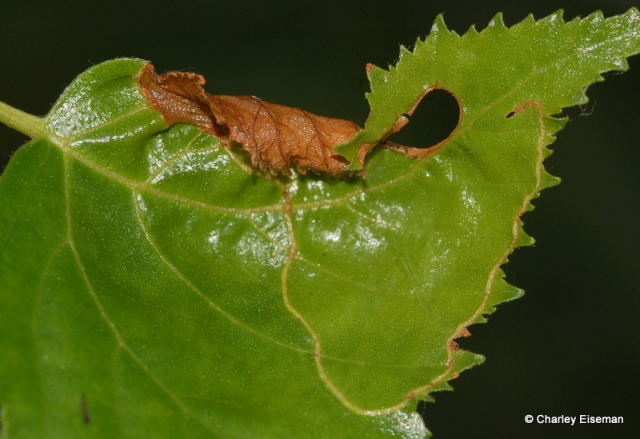 This species starts by making a long, narrow, linear mine, then forms a blotch, which is the brown, curled portion of the leaf in the above photo.  The large hole to the right of that was cut by the mature larva and the resulting circular leaf piece became its pupal case.  Most leafminers that do this are in the family Heliozelidae, and Annette Braun incorrectly associated these mines with Antispila argentifera when she described that species.

Leafminer #107: one of the several dogwood-feeding Caloptilia species (Gracillariidae), on alternate-leaved dogwood (Cornaceae: Cornus alternifolia).  Alas, the one mine I found had parasitoid exit holes in it, so there’s no hope of rearing it to find out exactly which species it is.  The large holes in the leaf to either side of the mine were made by some other insect. 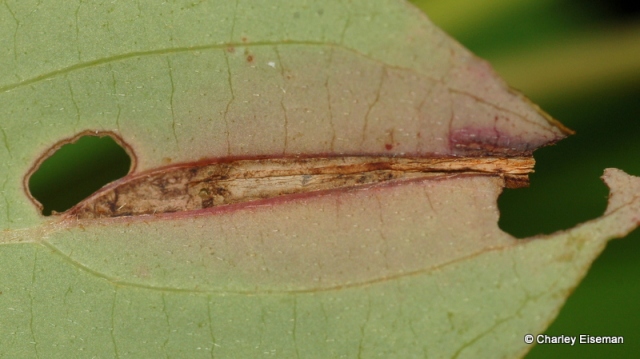 …and on gray-stemmed dogwood (C. racemosa).  As with Phylloporia bistrigella, the larva cuts out an oval pupal case when finished feeding. 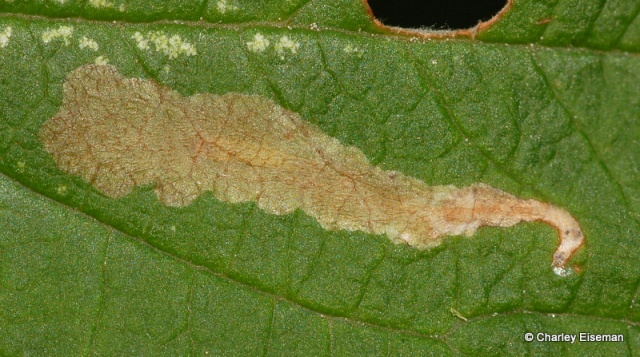 At this point in my exploration I encountered a very large and handsome toad in the patch of haircap moss (Polytrichum) that grows in the shade of the birch saplings (just by chance, the paper birch sapling is growing right next to a gray birch sapling and a black birch sapling, allowing for easy comparison of host preference among birch-feeding insects).

Leafminer #110: Parornix peregrinaella (Gracillariidae), on sweetfern (Myricaceae:  Comptonia peregrina).  In Darlington’s original description of this species, it’s evident that he mistook the older larva’s feeding shelter (made by using silk to tie down several lobes at the tip of the leaf, in the same way that most other Parornix species make leaf flaps) for its mine, which is a small, underside tentiform blotch.  In the example below, a short initial epidermal linear portion is visible on the lower surface, heading toward the tentiform blotch which is at the base of the leaf.

There seem to be more tiger swallowtails than usual in the yard this year.  Here’s one enjoying some milkweed flowers.

In my leafminer book I mention the existence of possible Phytomyza (Agromyzidae) mines on grass-leaved goldenrod (Asteraceae: Euthamia graminifolia), and this is one of them:

I’m not counting it in my tally because there’s an outside chance that these mines are made by Liriomyza eupatorii, which I’ve already included in the list. I haven’t yet found one with a larva inside, and there are no literature records of Phytomyza from Euthamia—but that doesn’t mean much, since there are no literature records of any other agromyzids from Euthamia other than my own, which document at least five different species using this host.

In the “lower nut orchard” I found a nice example of one of the mysterious “clothesline” egg sacs that are made by an unknown species of Tetragnatha.  I was able to get a DNA barcode from a spiderling from one of these egg sacs, but the species it matched didn’t make sense… more on that some other time, maybe. 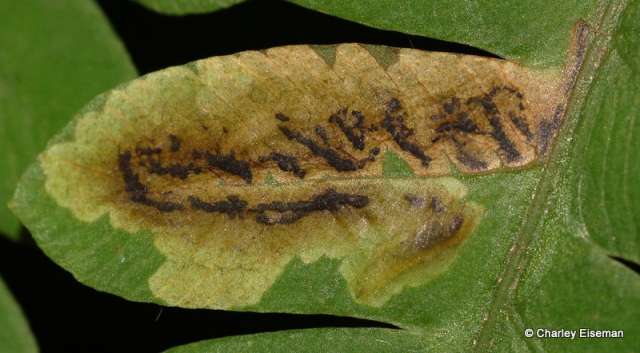 Leafminer #114: Stigmella scintillans (Nepticulidae), on the hawthorn (Rosaceae:  Crataegus sp.) by the mailbox.  This is one of four Stigmella species recorded from hawthorn in North America, and I had to look this one up in my book.  It’s not a species I’ve found before, so now I have some photos to add to the second edition.

Leafminer #115: Parornix sp. (Gracillariidae), on the same hawthorn.  This is the fourth Parornix on the list, and although I’m not sure exactly what species most of them are, the only other Rosaceae-feeding species I’ve found (on shadbush) is evidently different because it goes straight from leafmining to spinning a cocoon, whereas this one continues feeding in a leaf flap after exiting the mine.  Here’s the underside tentiform mine…

…and here’s the leaf flap.

Leafminer #116: Cycloplasis panicifoliella, a moth of uncertain superfamily placement, on deertongue grass.  I’ve now found two moths, two flies, and two beetles mining leaves of this one grass species in my yard.  Cycloplasis panicifoliella makes a circular cut-out from its finished mine, but unlike Phylloporia and Heliozelidae it uses only the upper epidermis, which it folds in half to make a semicircular pupal case.

As with Nemorimyza posticata, the mine of this species appears to be a plain brown blotch, but it turns out to have a fancy herringbone pattern of “toothmarks” if you look at it right.

There were also several of these beautiful Thyris maculata moths (Thyrididae) hanging out on the anemone patch.

I reared this species four years ago from a leaf roll on Clematis virginiana, and I had thought it was a Clematis specialist but evidently it feeds on Anemone too (both plants are in the buttercup family).

And for the last bug of the day, how about this snazzy moth that was resting on the outside of the upstairs bathroom window?  I cranked the window so that I had a clear view of the side of the moth and then took this picture through the screen.  I now wish I had taken out the screen for a sharper image.

I guess it’s a spiny oak-slug (Limacodidae: Euclea delphinii), which has a highly variable wing pattern and an equally dazzling caterpillar:

A few more additions to the list of plants I’ve eaten from my yard this year:

I am a freelance naturalist, endlessly fascinated by the interconnections of all the living and nonliving things around me. I am the lead author of Tracks & Sign of Insects and Other Invertebrates (Stackpole Books, 2010), and continue to collect photographs and information on this subject. These days I am especially drawn to galls, leaf mines, and other plant-insect interactions.
View all posts by Charley Eiseman →
This entry was posted in Uncategorized. Bookmark the permalink.