Return of the square mesh cocoon

In my first post, I wrote about a mysterious moth cocoon from Singapore with the puparium of a tachinid fly inside. Tonight, Jaap Vogel of Queensland, Australia sent me some photos of what appears to be the same type of cocoon, from near his home on Tamborine Mountain.  In the cocoons he found, however, the caterpillar was not parasitized, so we can see what the moth’s pupa looks like. 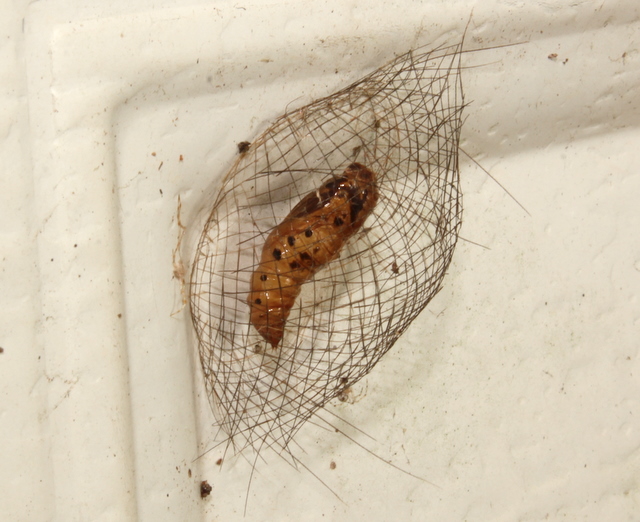 Another example, darker (more mature?) and with the caterpillar's shed skin hanging from the bottom.

The pupa in this one has succumbed to a fungus.

In all likelihood, the pupa in the last photo didn’t just happen to get moldy, but was attacked by a pathogenic fungus–probably one that is specific to moths, and perhaps one that is specific to this kind of moth.  It seems that there’s a fungus for just about every kind of bug out there, and on BugGuide.Net I maintain a gallery of grisly images contributors have submitted that depict various insects and spiders afflicted with these fungi.

I’m hoping that someday, someone will collect one of these pupae that hasn’t been attacked by flies or fungi and will pass along a photo of the adult moth.  It would be nice to be able to put a face to this exquisite work of art.

I am a freelance naturalist, endlessly fascinated by the interconnections of all the living and nonliving things around me. I am the lead author of Tracks & Sign of Insects and Other Invertebrates (Stackpole Books, 2010), and continue to collect photographs and information on this subject. These days I am especially drawn to galls, leaf mines, and other plant-insect interactions.
View all posts by Charley Eiseman →
This entry was posted in Solved Mysteries, Uncategorized and tagged arthropod pathogenic fungus, Australia, cocoon, Cyana meyricki, fungus, lichen moth, Lithosiini, moth. Bookmark the permalink.

2 Responses to Return of the square mesh cocoon