Last August on Nantucket I collected some yellow galls on the midribs of dwarf chinquapin oak (Quercus prinoides) leaves.  They are unlike any that I have found before or since, and I have found no references to them in literature, but I assume they are made by cynipid wasps. 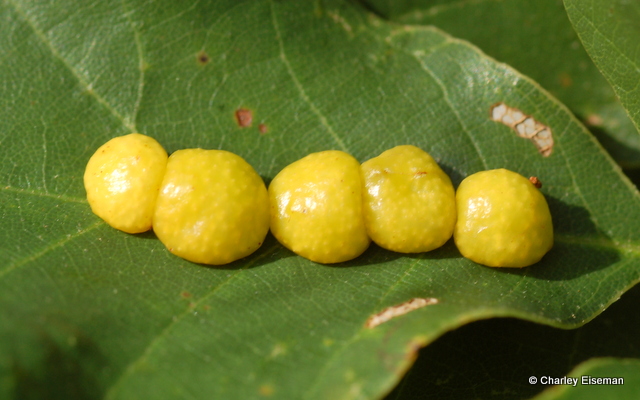 So far the only thing to emerge from them has been this 2.2-mm wasp: 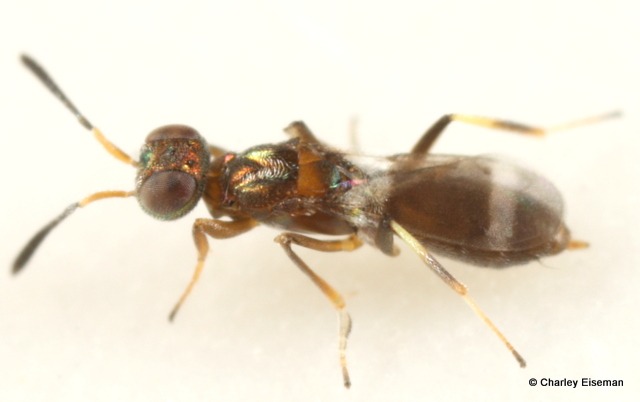 Gary Gibson told me, based on the photo, that it was a eupelmid wasp in the genus Brasema, and likely a new species.  So I tucked it in with some agromyzid flies I was sending to Owen Lonsdale, who is just down the hall from him at the Canadian National Collection, and today he reported back: “the eupelmid you sent is a described species after all. It is a female Brasema gemmarii (Ashmead). Officially, the species is still classified as Anastatus gemmarii (Ashmead), but is incorrectly assigned to genus. I simply have not had an excuse to transfer it yet.”

I looked up Anastatus gemmarii to see what its known host insects are, and at the writing of the 1979 Catalog of Hymenoptera, the species was only known from Florida, “originally said to have been reared from galls of Callirhytis quercusgemmaria (Ashm.), but in the subsequent nearly 90 years it has not been reared again from this rather common gall. The host record may be incorrect.” Callirhytis quercusgemmaria (Cynipidae) makes distinctive, ant-attracting galls on stems of red oaks, which certainly could not be confused with the galls that produced this wasp.  With any luck, cynipids will emerge from some of the other galls in the spring.

As it happens, the only other eupelmid I’ve seen also came from Nantucket. 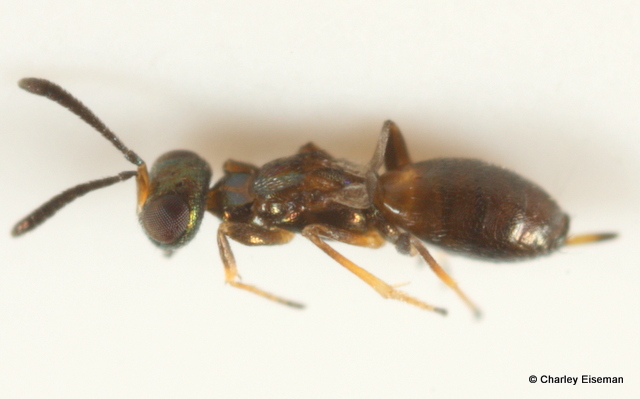 This 1.4-mm wasp is Eupelmus vesicularis.  According to a comment by Gary Gibson on BugGuide.net, “the species apparently was introduced from Europe on the earliest ships in straw. Both sexes occur in Europe but in North America it is parthenogenetic, i.e. reproduces asexually so there are only females. Makes it easy to be introduced. Females are not very particular in what they attack and this species has one of the largest host ranges known for a chalcidoid. Another characteristic that makes introductions easy.”

As you can see, females of this species are brachypterous, which is not unheard of in chalcids.  This wasp, incidentally, was the third type of parasitoid to emerge from the Calycomyza solidaginis leaf mines discussed here.

I am a freelance naturalist, endlessly fascinated by the interconnections of all the living and nonliving things around me. I am the lead author of Tracks & Sign of Insects and Other Invertebrates (Stackpole Books, 2010), and continue to collect photographs and information on this subject. These days I am especially drawn to galls, leaf mines, and other plant-insect interactions.
View all posts by Charley Eiseman →
This entry was posted in Uncategorized and tagged Brasema gemmarii, chalcid, Cynipidae, dwarf chinquapin oak, Eupelmidae, Eupelmus vesicularis, gall, gall wasp, Nantucket, oak, parasitoid, Quercus, Quercus prinoides, wasp. Bookmark the permalink.