A week ago, I wandered to the edge of my yard and noticed some agromyzid fly leaf mines in the bush honeysuckle (Diervilla lonicera) that I’m fairly sure are unknown to science.  So I stuffed a good number of leaves into some vials in an attempt to get some adult flies.  That evening I noticed a 1.5-mm braconid wasp in one of the vials:

The next day I was examining each of the leaves in that vial to look for the hole from which the wasp had emerged, and I noticed a funny little lump.  I looked at this under the microscope, and discovered that it was a fly in the process of emerging, its ptilinum fully expanded.  As quickly as I could, I adjusted the magnification on my camera lens and the exposure and angle of my flash heads, and I got the lens in focus just as the fly finished emerging from the leaf. 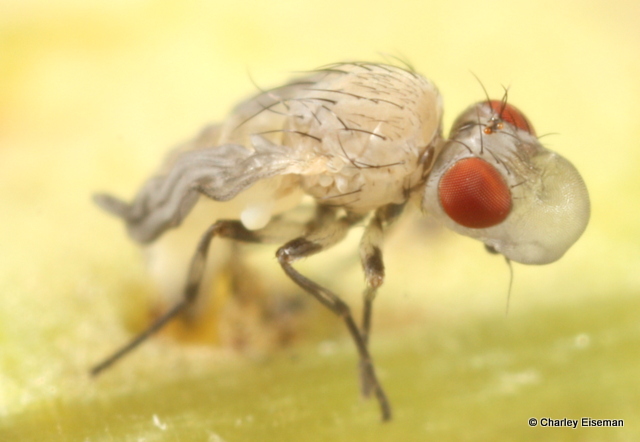 I took a few more shots in rapid succession, which show the balloon quickly receding. 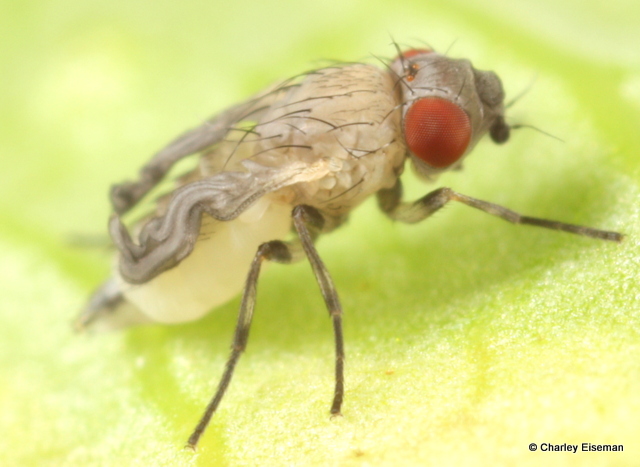 Five minutes later, it was looking like a proper fly, except its wings were still expanding.

The next day, it had darkened considerably and its wings were fully functional.

Maybe someday I’ll manage to get a shot of a little fly balloon head just beginning to poke out of a leaf, but these shots are at least an improvement on my series from two years ago.

In a few months, I’ll send Owen Lonsdale all the agromyzids I’ve accumulated this year, and we’ll see what these bush honeysuckle flies turn out to be.

I am a freelance naturalist, endlessly fascinated by the interconnections of all the living and nonliving things around me. I am the lead author of Tracks & Sign of Insects and Other Invertebrates (Stackpole Books, 2010), and continue to collect photographs and information on this subject. These days I am especially drawn to galls, leaf mines, and other plant-insect interactions.
View all posts by Charley Eiseman →
This entry was posted in Uncategorized and tagged Agromyzidae, Braconidae, bush honeysuckle, Diervilla lonicera, Diptera, fly, leaf mine, parasitism, parasitoid, Phytomyza, ptilinum, wasp. Bookmark the permalink.