Posted on September 1, 2014 by Charley Eiseman

Last week I was back in Maine to finish up work on the natural resource inventories I’ve been conducting there.  On Tuesday, some reddish lines radiating from bunchberry (Cornus canadensis / Chamaepericlymenum canadense) leaf bases caught my eye.

The first set of keys I completed for my book on leafminers was for the order Cornales, which includes bunchberry along with other dogwoods, tupelo, hydrangeas, and mock oranges. So I have a good sense of what mines there are to be found on these plants, and when I saw these red marks, I was mildly curious what they were, but I knew they couldn’t be leaf mines, and since I had a lot to get done, I resisted the temptation to investigate them.

On Thursday, I was working at another site when I came across a bunchberry patch where practically every leaf of every plant had these red lines. Although I had a lot to get done that day too, I couldn’t ignore something this conspicuous and abundant, so I got down on my knees and started trying to figure out what they were. To my surprise, some of the red areas clearly contained narrow, squiggly lines that looked like they had to be leaf mines. 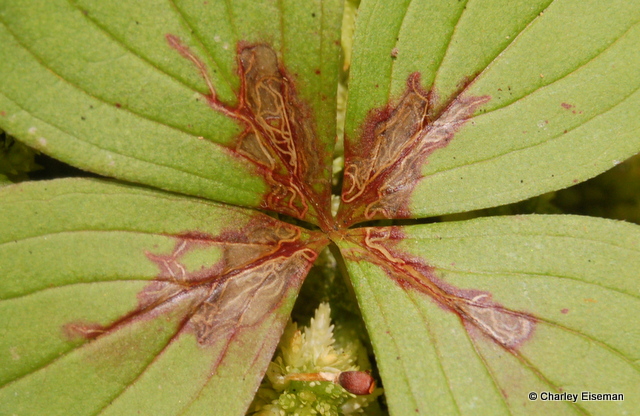 I picked the plant in the above photo and held it up to the light.

I could just make out little grains of frass (excrement) within the trails, confirming that they were leaf mines. However, there didn’t seem to be any larvae inside. This made sense in a way, since I imagined the red discoloration was something that developed after the mines were abandoned, but the mines were so narrow that it seemed like the larvae couldn’t possibly be done feeding. I wondered if the larvae of this species were initially leafminers, later exiting the mines to feed in some other way. I collected a good number of leaves, hoping that maybe one contained a dead larva whose DNA could be analyzed.

Conveniently for comparison, this same patch of bunchberry had examples of the leaf mines known to exist on this host. The only species that makes an entirely linear mine is a fly, Phytomyza agromyzina (Agromyzidae). Its mines are substantially wider, and rather than emanating from the leaf base, they start somewhere in the middle, almost always bumping into the tip at some point.

The above plant, in addition to two fly mines and three mines of the mystery miner, has a very young mine of Antispila freemani (Heliozelidae) (take a look at the edge of the leaf at the left side of the photo.) This moth makes blotch mines that typically start at the leaf edge, widening from there. The photo below shows a somewhat more advanced one: 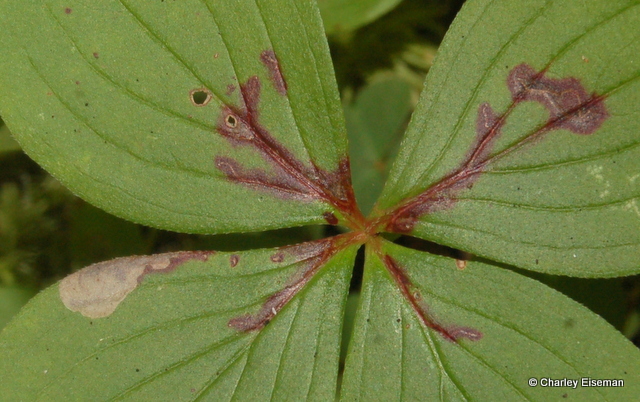 The completed mine, as with the related Antispila cornifoliella, has an oval hole snipped out as a result of the larva constructing its pupal case.

You can see from these examples that I wasn’t kidding about the red mines being on every leaf. Below is a presumed adult A. freemani that I found exploring a bunchberry leaf in Massachusetts last June. It looks pretty much the same as the A. cornifoliella adults I reared from roughleaf dogwood in Iowa.

In the photo below, the whitish area in the lower left leaf was made by a larva of Caloptilia cornusella (Gracillariidae), which abandoned this blotch mine to roll up the lower right leaf.

After feeding inside this leaf roll, the caterpillar returned to the original leaf to spin its cocoon on the underside, which caused the leaf to buckle a bit. 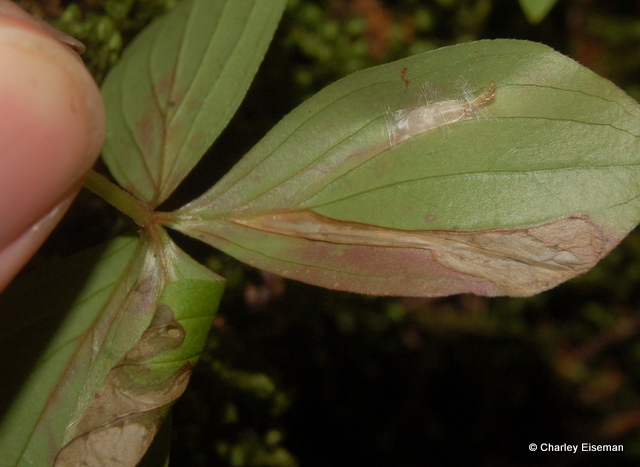 Looking more closely, we can see that the pupa has already been thrust from the cocoon, allowing the adult moth to emerge.

I reared an adult of this species two years ago from alternate-leaved dogwood (Cornus/Swida alternifolia) collected in Vermont:

Another Caloptilia species feeds on bunchberry and has similar habits. At least one of the three dogwood-feeding Coleophora species (Coleophoridae) mines in bunchberry leaves, but Coleophora species produce unique frass-free blotch mines by feeding from a portable case attached to the outside of the leaf. These little red mines clearly correspond with none of the abovementioned insects.

As I was putting this post together, I realized that the backlit shot doesn’t show the frass very well, so I took more photos of the same leaves with my macro lens. It turns out that there are larvae inside the mines—all of them.

In fact, in the full-resolution version of the above photo, I can make out three larvae, but the one toward the left edge is by far the largest. Here is the clearest photo I managed to get of one of these tiny larvae: 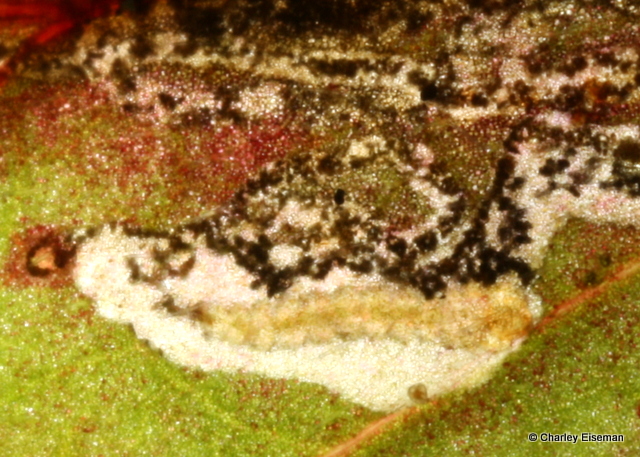 I am a freelance naturalist, endlessly fascinated by the interconnections of all the living and nonliving things around me. I am the lead author of Tracks & Sign of Insects and Other Invertebrates (Stackpole Books, 2010), and continue to collect photographs and information on this subject. These days I am especially drawn to galls, leaf mines, and other plant-insect interactions.
View all posts by Charley Eiseman →
This entry was posted in Uncategorized and tagged Agromyzidae, alternate-leaved dogwood, Antispila, bunchberry, Caloptilia, Caloptilia cornusella, Chamaepericlymenum canadense, cocoon, Cornaceae, Cornus alternifolia, Cornus canadensis, Diptera, dogwood, fly, Gracillariidae, Heliozelidae, larva, leaf mine, leaf roll, Maine, moth, Phytomyza agromyzina, pupa. Bookmark the permalink.