Swellings on willow stems can be caused by a variety of gall midges, sawflies, agromyzid flies, and buprestid beetles. In many cases I have no clue as to the identity of the gall inducer just from looking at a photo of the gall, so on BugGuide I long ago made a page here for dumping photos of unidentifiable willow stem galls. For my survey of galls and leaf mines of Nantucket, though, “some kind of willow stem gall” wouldn’t cut it, so last September I collected this gall on purple willow (Salix purpurea) to see what would emerge from it.

When Julia and I returned in November for the biennial Biodiversity Research Conference, we collected several more galls like this from the same clump of willows. They all went into the fridge for the winter, then got taken out along with all the other overwintering bugs in late February.

Between March 10 and 19, four midges emerged from the above gall, leaving their pupal exuviae poking out. 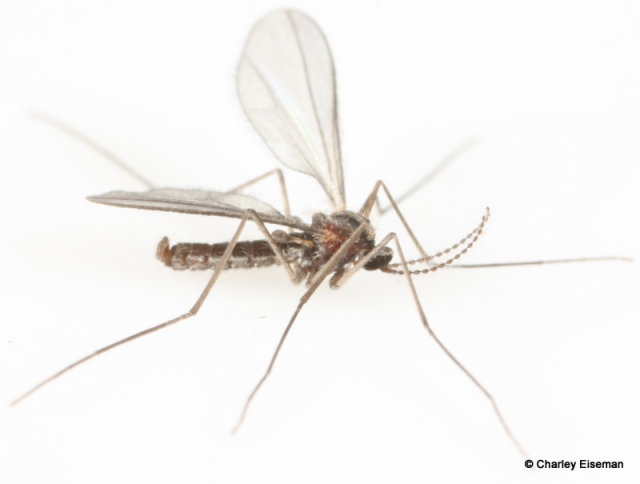 In Gagné’s* key to midge galls on willows, this gall lands at 12b: “Twig swelling tapered, woody, sometimes barely noticeable”, which is attributed to “Dasineura corticis Felt, Lygocecis spp., Neolasioptera sp., Rabdophaga spp., as well as sawflies.” Although I don’t yet know exactly which (if any) of these options are represented by my midges, with both male and female specimens in hand, I figure I have a pretty good shot at being able to put a name on them eventually.

Towards the end of March, look who emerged from one of the galls we collected in November:

A sawfly! More specifically, a sawfly in the genus Euura (Tenthredinidae). That used to mean a lot more than it does now; six years ago, phylogenetic studies resulted in numerous other genera being synonymized under Euura**, with the result that over 250 North American species are now placed in this genus—somewhere between a fifth and a quarter of all North American sawflies. I just finished entering all of these species into a spreadsheet as part of my new sawfly larva project, and to my horror I discovered that these synonymies have resulted in eleven secondary homonyms that apparently no one has done anything about. That is, there are eleven pairs of species with identical names, and to make matters worse, six of these pairs have the same author and year. For instance, Marlatt (1896) described Pontania pacifica and Pteronus pacificus, but both species are now known as Euura pacifica (Marlatt, 1896). Although Dave Smith, the American authority on sawflies, was a coauthor on the paper that made these drastic changes, he has continued to use the old genus names, which do provide useful groupings. For instance, Pontania species form closed leaf galls on willows; Phyllocolpa species form simple leaf fold or leaf curl galls on willows and poplars; species of Euura subgenus Gemmura form willow bud galls; and species of Euura subgenus Euura form willow twig and petiole galls. In any case, no matter how you slice it, this sawfly I reared is as Euura as they come.

All that aside, this rearing provides the perfect opportunity to learn how to distinguish midge and sawfly galls made on twigs of the same willow, right? So here’s a side by side comparison:

Because of this, it’s hard to say with confidence what insect was the host of the twelve pteromalid wasps that emerged from the November galls over the course of the next month.

The first ones appeared on the same day as the sawfly—one even emerging from a smaller hole in the same gall:

But does that necessarily mean the pteromalid is a sawfly parasitoid? As I understand it, these Euura larvae are always solitary. It may be possible that this individual pteromalid uncharacteristically acted as a true parasite—not killing its host—but it’s also possible that its host was a midge that was either an inquiline in the sawfly gall or happened to initiate an inconspicuous gall at the same point on the stem.

In addition to the dozen pteromalids, a single male Eurytoma (Eurytomidae) emerged from one of the November galls in mid-April.

The moral of this story is, if you want to find out what kind of willow stem gall you have, you might be able to find out by waiting to see what emerges, but this might just leave you with more questions! Cutting the gall open should help to clarify sawfly vs. midge, but of course if you do this while it’s still occupied then you’ve blown your chance to find out exactly which sawfly or midge.

I am a freelance naturalist, endlessly fascinated by the interconnections of all the living and nonliving things around me. I am the lead author of Tracks & Sign of Insects and Other Invertebrates (Stackpole Books, 2010), and continue to collect photographs and information on this subject. These days I am especially drawn to galls, leaf mines, and other plant-insect interactions.
View all posts by Charley Eiseman →
This entry was posted in Uncategorized and tagged Cecidomyiidae, chalcid, Diptera, Eurytomidae, Euura, fly, gall, gall midge, Hymenoptera, parasitism, parasitoid, Pteromalidae, Salicaceae, Salix, sawfly, Tenthredinidae, wasp, willow. Bookmark the permalink.