It’s been two and a half months since my last post—not, of course, because I’ve run out of things to write about, but because there’s too much going on at this time of year for me to find the time to write anything. To compound this busy-ness, Julia and I took a nearly three-week road trip last month to look for leafminers in Colorado and the Midwest. Ever since we got back, emerging leafminers have taken up most of the waking hours that I haven’t been at work. But since this blog has just reached 500 subscribers, I thought I’d throw together a little something to mark the occasion.

On July 1, we met up with ant taxonomist and all-around great naturalist James C. Trager at Shaw Nature Reserve just west of St. Louis, Missouri. Toward the end of our walk, we happened on something I’ve been wanting to see for a long time: a wriggling mass of dark-winged fungus gnat (Sciaridae) larvae on the move. 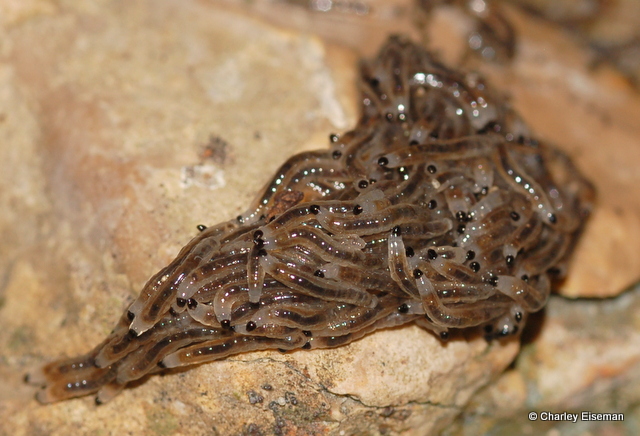 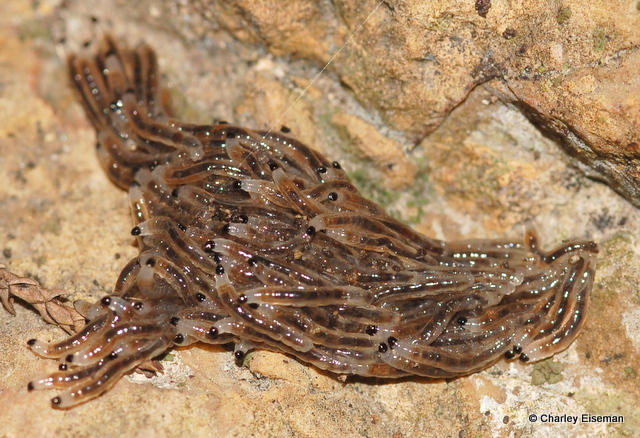 A year ago, I asked Rob Deady (as far as I can tell, the only person in North America who studies dark-winged fungus gnats) about this phenomenon. He said that the behavior seems always to be triggered by water, and indeed it had just been raining a few hours before we encountered these larvae.  In these masses, the larvae crawl across a film of mucus that they secrete, probably in search of a drier area to pupate rather than to continue feeding, but this apparently hasn’t been studied very thoroughly. The behavior is exhibited by many Sciara species, including S. militaris and S. thomae, as well as members of other genera such as Bradysia bicolor, Cratyna perplexa, and Ctenosciara hyalipennis.

My camera has no video feature, but after taking the above photos I borrowed Julia’s camera and made a couple of short, shaky videos with it. Below, you can watch the most in-focus parts, which Julia edited together with a much better clip that she made by resting the camera on the ground (that one comes first, so you don’t have to get seasick right off the bat).

For more examples of this phenomenon, see this BugGuide page, which includes several instances of the larval masses forming perfect circles.

I am a freelance naturalist, endlessly fascinated by the interconnections of all the living and nonliving things around me. I am the lead author of Tracks & Sign of Insects and Other Invertebrates (Stackpole Books, 2010), and continue to collect photographs and information on this subject. These days I am especially drawn to galls, leaf mines, and other plant-insect interactions.
View all posts by Charley Eiseman →
This entry was posted in Uncategorized and tagged dark-winged fungus gnat, Diptera, fly, fungus gnat, Sciaridae. Bookmark the permalink.