You may recall that last spring I wrote a series of three posts that each highlighted something I hoped people would keep an eye out for; the last of these was a moth whose life history I had pieced together over several years. You can read the whole saga here, but to summarize:

In September 2011 I found this curious leaf mine on arrowwood (Viburnum dentatum) during my first survey of gallmakers and leafminers on Nantucket (this mine was actually on Tuckernuck, a tiny island nearby): 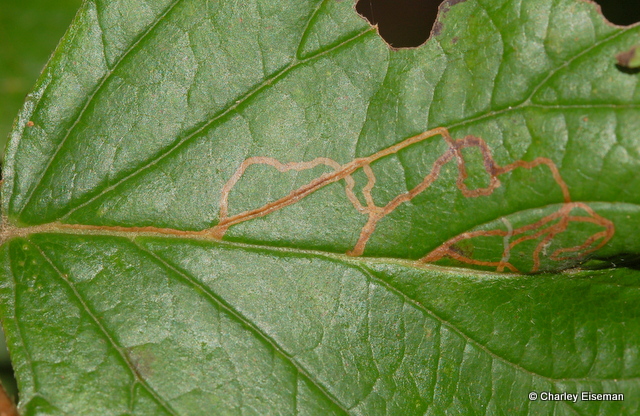 In August 2012, I found these mines abundantly on Nantucket, and I realized that each one entered the midrib, proceeded down the petiole, and into the stem: 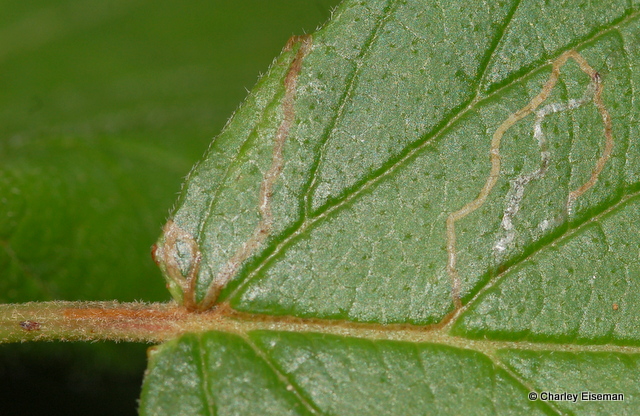 This tiny larva popped out of a twig I collected, and when I showed it to Dave Wagner and Don Davis, they agreed that it looked like an early-instar Marmara (Gracillariidae): 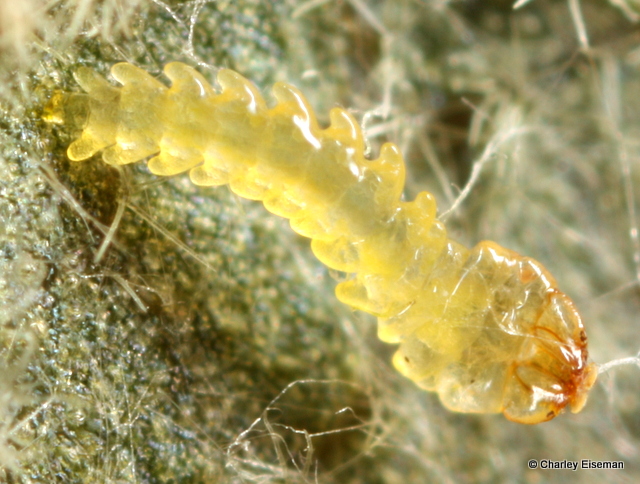 The genus Marmara is mostly composed of bark/stem miners, with a few mining in the skins of fruit (notably the “citrus peelminer,” M. gulosa), and two feeding more or less exclusively as leafminers. All published accounts indicate that the bark/stem miners lay eggs directly on the stem, so this business about starting in the leaf and ending up in the stem was a little strange.

In June 2013 I continued to check out arrowwood plants and found that some of them had stem mines typical of Marmara: 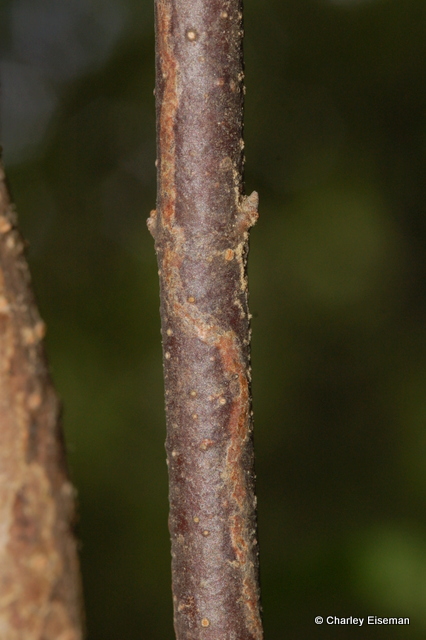 As far as is known, all of the Marmara species that mine in woody stems have a single generation, with larvae hatching in summer, overwintering partially grown, finishing feeding in spring, and then pupating. Most species exit the stem before spinning a cocoon, and to rear them you need to find the larvae at just the right time, or else luck out and find one that spun its cocoon right on the host plant instead of wandering off to some hidden place where, if you happened to find it, you would have no idea what its host plant was. So in 2014 Julia and I flagged some arrowwood plants that had leaf mines, returning in December to dig them up, pot them, and bag them in transparent fabric with the hope of trapping any adult moths that emerged the following spring. 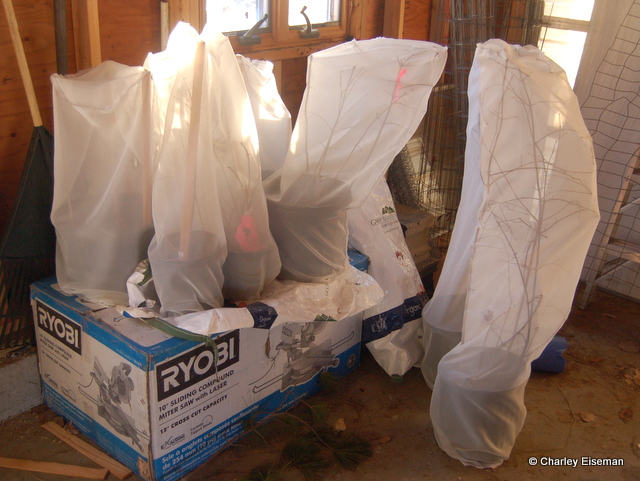 This was a failure, and we weren’t sure what to try next, until in July 2015 we stopped at a rest area in Illinois on our way to Colorado and spotted a couple of these bark flaps in association with Marmara leaf mines on an arrowwood:

These bark flaps are characteristic of the few Marmara species that don’t exit their mines to spin cocoons. The larva makes a semicircular cut in the bark at the end of its mine and spins its cocoon under this, causing the resulting flap to buckle: 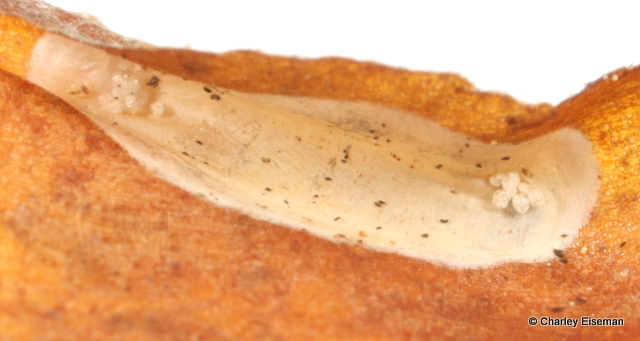 So now all we had to do was return to Nantucket in June and look for the bark flaps, which we did last year. The problem was that the mines of this species are usually so deep in the bark tissue that they aren’t externally visible. Our solution was simply to search every single arrowwood plant we saw, whether or not it had any bark mines that we could see. We spent several hours doing this over the course of a few days, and we succeeded in finding a few dozen bark flaps, some of which were clearly old and empty, but some of which were not. 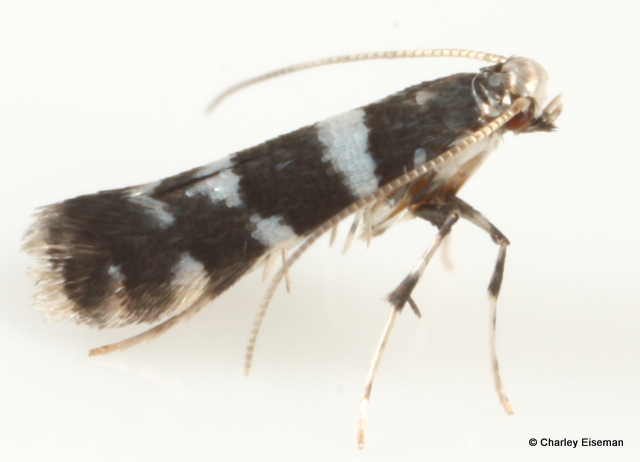 They looked pretty similar to a number of other Marmara species. But in the fall, after my fieldwork had wound down, I reviewed the original descriptions of all 19 described North American species as well as the five South American ones, and I made a table detailing the wing pattern and various life history characteristics for each species. I discovered that all of the species that pupate in bark flaps at the end of stem mines are easily distinguished from this one by the wing pattern.

So I was confident that I had a new species. Now my problem was that nowadays to describe a new moth species, you need not only to describe the external features; you also have to dissect it and describe and illustrate the genitalia. This isn’t something I have learned how to do, and even if that weren’t an obstacle, the genitalia have only been described for a few Marmara species, so I wouldn’t be able to properly compare them with those of related moths. Having invested so much effort in learning the identity of this moth, I was determined not to just throw it on the pile of 100+ undescribed Gracillariidae that Don Davis has been working on for 50 years with the intention of publishing their descriptions in a big monograph someday… So I wrote to him and asked if he would be willing to collaborate on a paper describing this moth, in which he would deal with the genitalia and I would do everything else. He said he would be happy to.

So I wrote up my little early 20th century style description, and while I was at it I thought it would be fun to put together a table of all the known and suspected Marmara host plants based on published literature along with observations Julia and I had made on various trips around the country. I also incorporated other sources like observations posted to BugGuide.net, and Mike Palmer (in Oklahoma) and Tracy Feldman (in North Carolina) came up with so many interesting new records that I added them as coauthors too.

I happened to get the paper back from review while I was in southern California this March, and Dave Wagner happened to be in the room. I started chatting with him about it and realized it was ridiculous to publish this master table of Marmara records without incorporating his data from the past 30+ years, so I added him as a coauthor too, and a few months later he found the time to go through all of his records and add them to the table. The result of our pooled observations together with the literature review is an annotated list of known or suspected Marmara host plants belonging to 115 genera in 50 families. A sizable chunk of these involve the citrus peelminer, which turns up on all sorts of plants in agricultural settings in southern California, but setting these records aside, it is clear that there are more Marmara species without names than there are described ones.

One more species has a name as of today though! The paper* was just published, so I can finally unveil the viburnum feeder’s (rather unsurprising) name, Marmara viburnella. Although the three adults from Nantucket are the only known specimens, our observations of leaf and stem mines indicate that this species occurs throughout the eastern US and Canada.

Before I sign off, here are some other bugs that are mentioned briefly in the paper but not illustrated. Our collections of M. viburnella cocoons yielded 33 parasitoid wasps in addition to the three moths, belonging to two species. 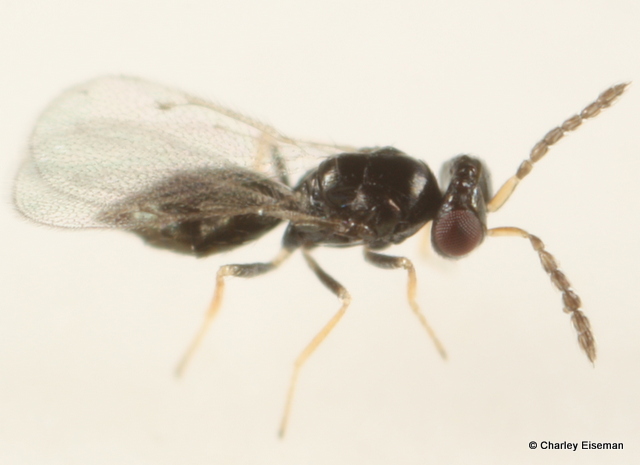 All from this one cocoon: 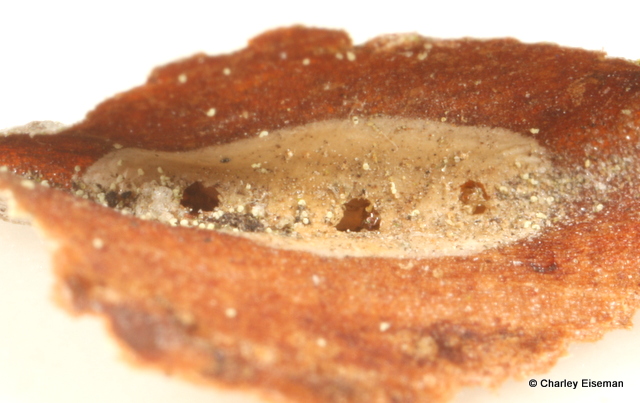 There is no key to North American Quadrastichus species, and as with Marmara, there are probably more undescribed ones than described ones.

The other wasps all belonged to this species of Ageniaspis (Encyrtidae): 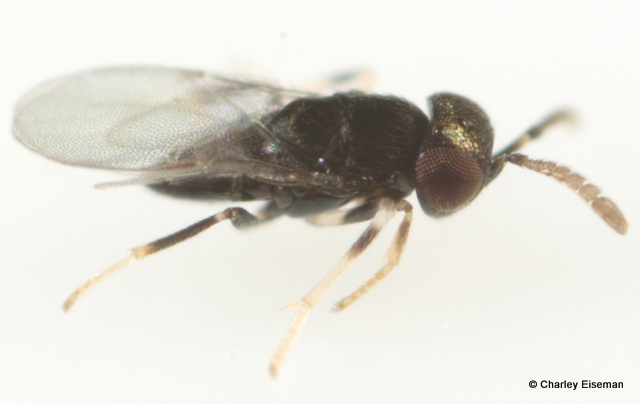 Six of them came from this cocoon… 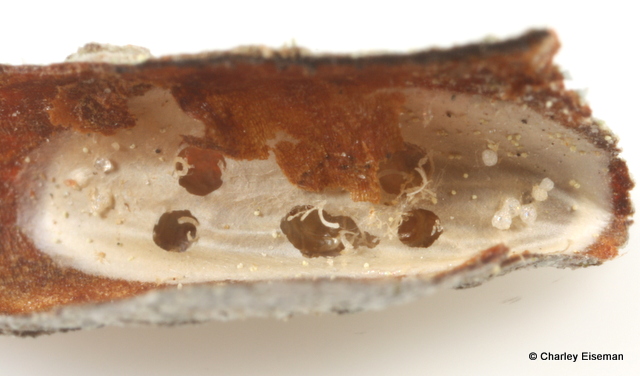 …and the other 23 emerged from an unknown number of cocoons that were collected together in one vial. They don’t match any of the species recorded from northeastern North America; I suppose a world revision of the genus will be needed before it can be determined whether they belong to any described species. Encyrtids are polyembryonic, meaning that multiple embryos can develop from a single fertilized egg, so it’s likely that all the wasps emerging from one moth cocoon came from a single egg. What’s crazier is that, based on what is known about other Ageniaspis species, the wasp egg was probably inserted in the egg or newly hatched larva of the moth back in the summer of 2015, with the wasp larvae biding their time within the moth larva as it mined around in its leaf, down the petiole and into the stem, overwintered, mined some more in the bark until it reached maturity, cut out its little bark flap, and spun its cocoon in the late spring of 2016, then they got around to devouring their host, emerging as adults a few weeks later.

And finally, some more benign associates. As Julia and I went around peeling back bark flaps in search of fresh cocoons, we found a variety of little springtails and beetles who thought M. viburnella’s bark flaps were good hiding places: 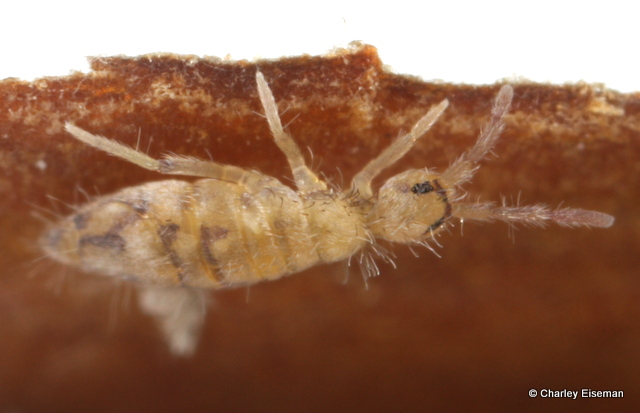 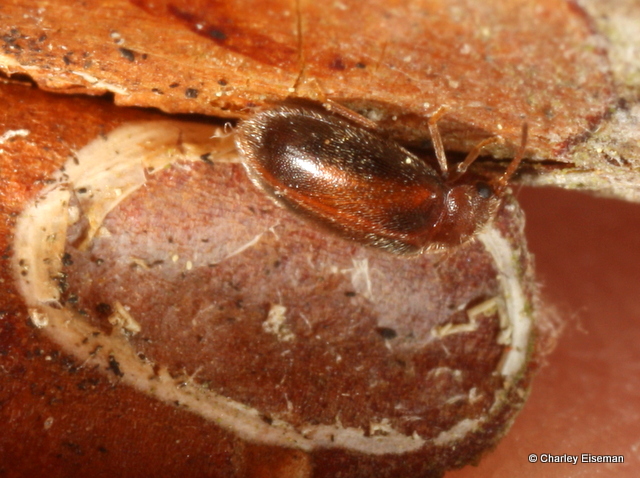 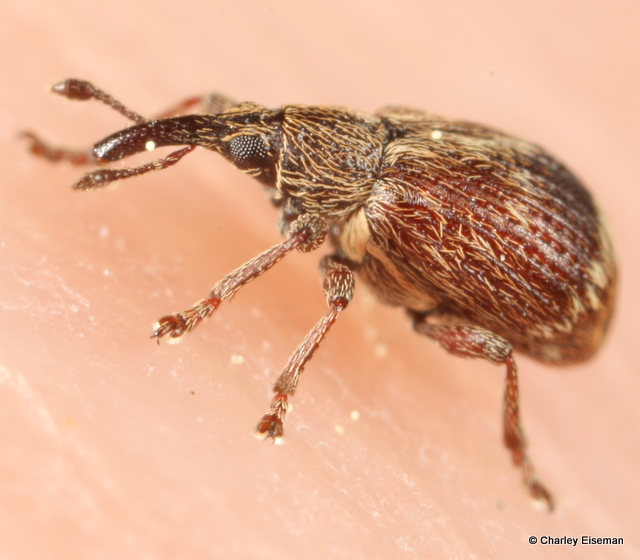 Although this weevil can’t be identified to species just from the photo, it is likely N. herculanum, which is known to feed on arrowwood (I assume larvae develop in the seeds).

If each of the remaining mystery Marmaras takes me five or six years to sort out, that could keep me occupied for a while… I hope that by publishing a long list of unknowns that need to be investigated, I will inspire at least a few other people to join in the fun. So have at it!

I am a freelance naturalist, endlessly fascinated by the interconnections of all the living and nonliving things around me. I am the lead author of Tracks & Sign of Insects and Other Invertebrates (Stackpole Books, 2010), and continue to collect photographs and information on this subject. These days I am especially drawn to galls, leaf mines, and other plant-insect interactions.
View all posts by Charley Eiseman →
This entry was posted in Solved Mysteries, Uncategorized and tagged Ageniaspis, Anurophorus, arrowwood, beetle, Brentidae, chalcid, cocoon, Coleoptera, Contacyphon, Encyrtidae, Entomobrya, Entomobrya nivalis, Entomobryidae, Eulophidae, Gracillariidae, Hymenoptera, Isotomidae, larva, leaf mine, Lepidoptera, Marmara, Marmara viburnella, moth, Nantucket, Neapion, Neapion herculanum, new species, parasitism, parasitoid, Quadrastichus, Scirtidae, springtail, stem mine, Tetrastichinae, Viburnum, Viburnum dentatum, wasp, weevil. Bookmark the permalink.

16 Responses to A Hard-won Moth