Discovering New Species Along the Driveway

Posted on September 17, 2018 by Charley Eiseman

In this photo from May 2015, I was celebrating our newly installed solar panel’s generation of its first kilowatt hour. But unbeknownst to me at the time, the photo also shows where I collected the type specimens of two new species—the descriptions of which have just been published in a paper I coauthored with Owen Lonsdale*. 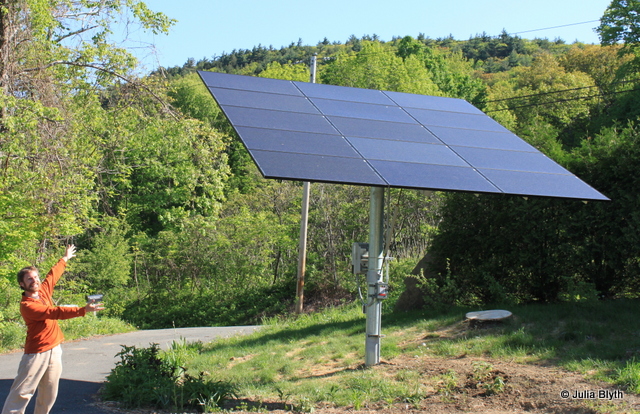 Along the driveway at the left edge of the frame, in September 2013 I had collected some basal leaves of daisy fleabane (Erigeron annuus) that were being mined by fly larvae. 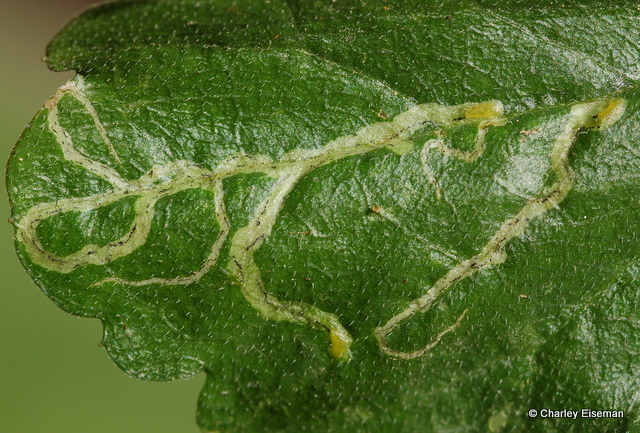 When finished feeding, the bright yellow larvae popped out of the leaves and formed shiny black puparia. 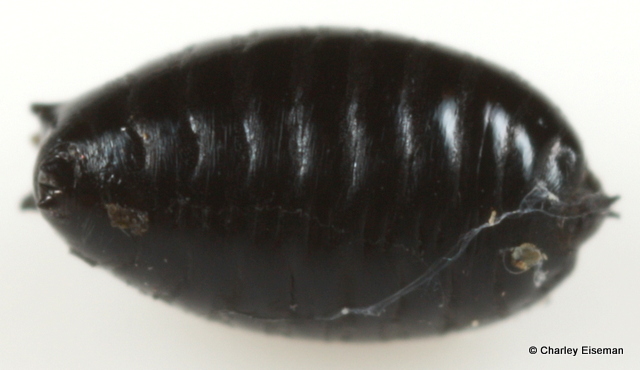 In my “Fixing the Lawn” post I showed one of the two female flies that emerged a few weeks later, noting that “I won’t know exactly what they are until Owen Lonsdale examines the specimens.” Fortunately there was also a male among them, since agromyzid taxonomy is largely based on details of the male genitalia. 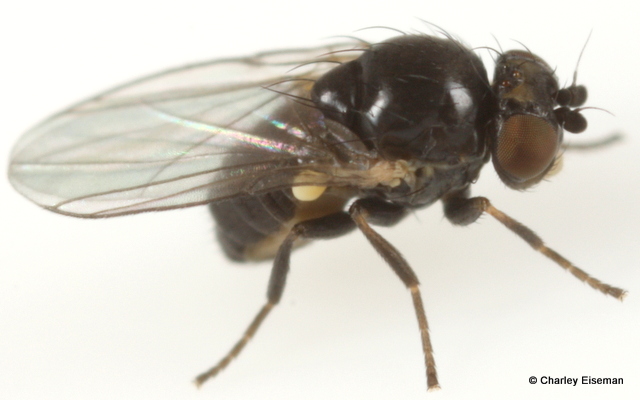 Owen determined that these flies belonged to an undescribed species, so we named it Phytomyza erigeronis, and this male was designated as the holotype. The rest of the type series consisted of six other specimens from my front yard, plus nine reared from leaf mines Julia and I collected at the Connecticut BioBlitz in 2016. Two other North American Phytomyza species are known to form linear mines in fleabane leaves; so far this is the only species I’ve managed to rear, but based on published descriptions the mines of P. erigerophila and P. peregrini are shorter (3-6 cm vs. well over 7 cm).

A year after the solar panel was installed, I collected a few leaves like this one from an aster (Symphyotrichum laeve) that was growing right under the panel.

This mine appears to be empty, but the sneaky larva switched to the lower leaf surface at the last minute and formed its puparium there (in the upper left corner of the photo below).

This distinctive leaf mine, with the frass deposited in large, widely spaced lumps along its length, is attributed to Ophiomyia quinta in Tracks & Sign of Insects. Here’s the story behind that: In 1969, when Kenneth A. Spencer revised the Agromyzidae of Canada, he had a whole bunch of undescribed Ophiomyia species to deal with that had nothing known about their natural history. So he just named some of them O. prima, O. secunda, O. tertia, O. quarta, O. quinta, O. sexta, O. septima, O. octava, O. nona, O. decima, O. undecima, and O. duodecima.  When he revised the US species with Steyskal in 1986, he determined O. decima to be a synonym of O. congregata, and he identified some flies reared from asters and goldenrods as O. quinta.

With a number of new specimens at his disposal, Owen made careful comparisons and found that nothing matched the holotype of Ophiomyia quinta. All of the specimens reared from mines like this on Symphyotrichum asters belonged to a new species, which we named Ophiomyia parda because (if you use your imagination) the mines are spotted like a leopard (Panthera pardus). The type series includes specimens I reared from heart-leaved aster (S. cordifolium), smooth aster (S. laeve), panicled aster (S. lanceolatum), and purple-stemmed aster (S. puniceum) collected throughout Massachusetts, plus one from Short’s aster (S. shortii) in Ohio. But Owen chose one from under my solar panel as the holotype. I don’t have a good photo of that specimen, but here is his sister: 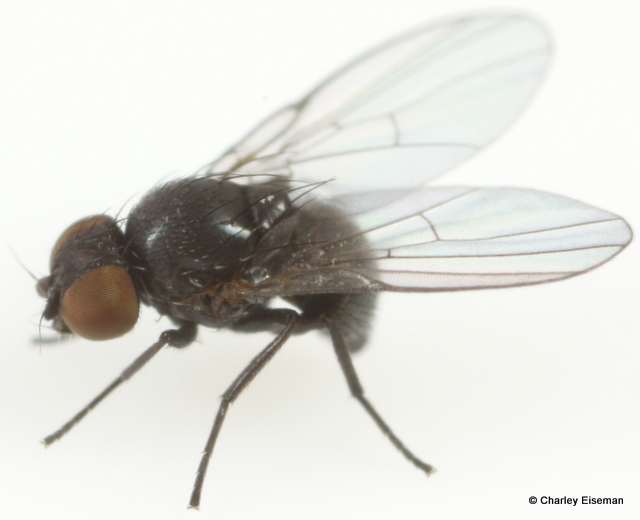 As far as I can tell, leaf mines with frass spots like this do not exist on goldenrod or even on other aster genera. The same observation was made by S. W. Frost nearly 100 years ago, and it was his specimens reared from goldenrod that Spencer had identified as O. quinta. Owen examined Ophiomyia specimens I reared from a variety of goldenrods (Solidago spp.), and they all proved to be the very similar species O. maura. Although Owen was unable to examine the US specimens of “O. quinta” that Spencer had examined for his 1986 publication, it seems reasonable to conclude that they were actually a mixture of O. parda and O. maura and that the host and larval habits of O. quinta remain to be determined.

These are just two of the thirty new species described in our new paper. The rest were not found right along my driveway, but a number of them were only a short walk from there. I’ll get to some of those next time…

* Eiseman, Charles S. and Owen Lonsdale. 2018. New state and host records for Agromyzidae (Diptera) in the United States, with the description of thirty new species. Zootaxa  4479:1-156.

I am a freelance naturalist, endlessly fascinated by the interconnections of all the living and nonliving things around me. I am the lead author of Tracks & Sign of Insects and Other Invertebrates (Stackpole Books, 2010), and continue to collect photographs and information on this subject. These days I am especially drawn to galls, leaf mines, and other plant-insect interactions.
View all posts by Charley Eiseman →
This entry was posted in Uncategorized and tagged Agromyzidae, Asteraceae, daisy fleabane, Erigeron, Erigeron annuus, leaf mine, new species, Ophiomyia, Ophiomyia parda, Ophiomyia quinta, Phytomyza, Phytomyza erigeronis, puparium, Symphyotrichum. Bookmark the permalink.

10 Responses to Discovering New Species Along the Driveway